Skip to content
The following is an account, written by first-year student Marsha Polovets, about the Freshman Seminar she took this semester. Freshman and Sophomore seminars are one-credit courses given by a faculty member to a small group of lower-division students to explore a scholarly topic of mutual interest together. Marsha has been enrolled in Professor Katherine Snyder’s “Rethinking Hemingway” course which focused on gender issues and the way they have reinvigorated Hemingway studies over the past two decades.
***
On the first day of class, Professor Snyder asked the students to list what images or words we associated with this iconic author. The entries on the board quickly piled up: “expatriate,” “fishing,” “war,” “journalist,” “bullfighting,” “stoicism,” “alcoholic,” and so on. Many answers flashed through my mind, but now that I look back on it, the most important one never came until writing this blog. Hemingway was special to me because I associated him with my grandfather through his rugged character, his love for boxing, and his noble looks. I signed up for the class because I wanted to see the essence of the man and the writer. Do I still connect Hemingway to my grandfather? In some ways yes, and in some ways probably no, but I definitely appreciate Hemingway more than I did before. 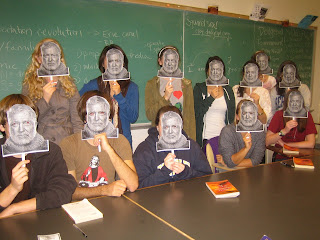 The course began with analytical essays by literary critics Debra Moddelmog and Thomas Strychacz who posed challenging questions about the role of masculinity and identity in Hemingway’s works and introduced us to some of the themes and issues we would encounter. First we tackled a chapter from Death in the Afternoon, Hemingway’s highly idiosyncratic study of Spanish bullfighting. Next, we read a selection of short stories, including “Indian Camp,” “The Battler” and “Big Two-Hearted River,” and discussed the ways in which race, sexuality, and gender intersect as well as how Hemingway understands both his male and female characters. The character of Margot Macomber in “The Short Happy Life of Francis Macomber” particularly intrigued us: is she weak or powerful? does she mean to save or kill her husband? does his death destroy or liberate her? Our discussion of this complex female character and Hemingway’s ambivalent attitude toward her set the stage for our reading of the gender-bending Lady Brett Ashley in The Sun Also Rises. We also focused on the male characters in the story: the epicurean Count Mippipopolous, the Jewish boxer/author/scapegoat Robert Cohn, the bullfighter Pedro Romero, and of course Hemingway’s narrator, Jake Barnes, whose sexual war wound makes him, above all, the emblem of masculine lack in the novel and, paradoxically, its epitome of ideal manhood.

Our discussions in the class engaged issues of form as well as content, as we considered how Hemingway’s style—at once concretely descriptive and yet leaving much unspoken, at once flowingly associative and yet awkwardly abrupt—might be understood in gendered terms. Is there such a thing, we asked, as “masculine style,” and what are its implications for narrative voice, character development, and symbolic meaning? Since this was just a one-unit seminar, we didn’t write any full-scale, formal essays, but each week students posted informal responses to the readings and to each others’ comments on our bSpace course website, enabling us to engage more actively with the readings and to develop questions for class discussions. In the final weeks of the course, we reading some parodies from The Best of Bad Hemingway, and then try our hands at writing (and reading aloud in class) our own Hemingway parodies: Hemingway-style prose so bad that it’s good! 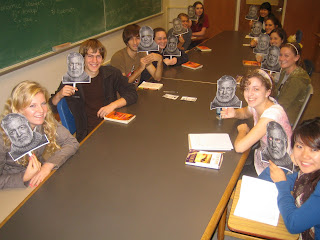 The seminar has been a wonderful introduction to Hemingway’s works, and it helped me improve my analytic skills. Professor Snyder really challenged the class to be active readers and look for deeper meanings in the texts. She encouraged us to question the notion that there is a unified essence of masculinity and to recognize that Hemingway’s work can be interpreted in many different ways. I learned that I am interested in exploring the role of gender and identity in literature, and I began to read from a new point of view. It was a special way to start my journey at Cal, and I am very thankful for it. Hemingway has been transformed from a cultural figure and the symbol of masculinity to a complicated person and an insightful author whose works possess an intricate, challenging style and reflects some of the most beautiful and human emotions. I hope to return to Hemingway in the future and “rethink” him again, remembering what I learned in Professor Snyder’s class. Like my grandfather, “Papa Hemingway” will always hold a special place in my heart.