Skip to content
UC Berkeley is famous for inspiring its undergraduates to pursue advanced degrees in graduate school, and the English Department is no exception. Senior English major Ana Schwartz, one of the department’s very promising young scholars, spent this past summer participating in Yale University’s Summer Undergraduate Research Fellowship, where she was funded by the Leadership Alliance, a program that helps to prepare minorities who are under-represented in the academy for graduate school. A Mexican-American who grew up in Sonoma County and a transfer student to Berkeley, Ana reports that she was a bit dumb-founded by the gothic grandeur of a university like Yale (and she also reports that she was happy to return to the sunshine and tall trees of Berkeley’s campus). 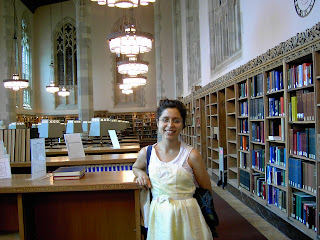 As a participant in the program, Ana spent her summer exploring the rich holdings of Yale’s Sterling Memorial Library. She was paired with a faculty advisor from Yale, with whom she met once a week to discuss the progress and development of her research. Though she initially began with a plan to think about Benjamin Franklin’s Autobiography, she quickly turned to more contemporary issues. What is the ambivalent relationship that contemporary “highbrow” culture has to the phenomenon of the Oprah Book Club?, she wondered. What is the resistance to this kind of “democratization” of literature in the hands of a minority female leader? Indeed, how is the “female reader” figured in contemporary popular discourses and why is there such a critique of “book clubs” in general? These questions led her to trace the representation of and response to Oprah’s book club in the New York Times and the ways in which these representations either coincided or diverged from treatments of Toni Morrison’s difficult book Beloved (which, Ana noted, Oprah has never chosen as a selection despite having starred in the film version).

Ana’s research culminated in a presentation at a conference in Hartford where all the undergraduates who were funded by the Leadership Alliance (and who had spent their summers at over 20 different universities) met to exchange their ideas. As one of the few humanities students in a sea of scientists (of the 25 students at Yale alone, only 5 were in the humanities or social sciences), Ana quickly found her niche and reports having stimulating conversations about a wide range of issues.

Ana is currently working on an honors thesis that, at the time of this writing, is provisionally about the mother-daughter dynamic in postcolonial literature. She was one of Berkeley’s nominees for the Rhodes Scholarship (no small feat, to be sure) and has applied to graduate programs in English and American Studies. She hopes to continue her work on contemporary literary and cultural issues, especially the role that literature plays in the process of immigration and naturalization.