Skip to content
In what follows, PhD candidate Jhoanna Infante details her experiences with the University’s Early Academic Outreach Program and shows another way that the English Department gets involved with the surrounding Bay Area community. 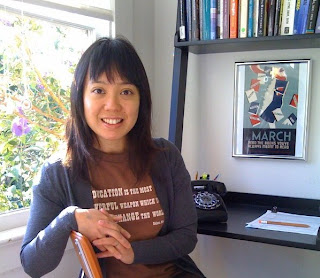 One afternoon last summer, I unexpectedly found myself behind a podium defending the U.S. War on Mexico of 1846, channeling President James K. Polk’s argument that Mexico instigated conflict by “invad[ing] our territory and shed[ding] American blood on American soil.” At the time, I was teaching a summer writing course for high school students, entitled Founding Words: Powerful Arguments in U.S. History. As part of an in-class debate designed to prepare the students for an upcoming essay, I had to muster all the zeal and evidence I could to defend an argument with which I disagreed. Though this was exactly in accord with the advice I had given my students earlier that day — “You must understand your opponent’s argument in order to understand your own” – it was nevertheless strange to inhabit a pro-war, expansionist argument that had led to the deaths of thousands of American and Mexican soldiers. It reminded both me and my students how powerful words can be, and, over the next week, they became increasingly enthusiastic and skilled in the use of those words. I saw the results in their written analyses of the U.S. War on Mexico, which demonstrated their firm grasp of the multiple ways of interpreting that historical event.

This course was the fifth College Writing course that I have taught for the Pre-College Academy (PCA), a summer enrichment program of the University of California’s Early Academic Outreach Program (EAOP). Since 1985, EAOP has enrolled more than 200 students each year from under-resourced public high schools in the Bay Area in PCA math and/or writing courses; it reaches out in particular to students who come from low-income families or who will be the first in their family to attend college in the United States. EAOP also offers an SAT academy, year-round academic advising, and several programs that enable students to complete college courses while still in high school. EAOP’s philosophy that students will succeed if presented with opportunity, high expectations, and a well-coordinated support network shows results: 76% of EAOP students go on to two- or four-year colleges or universities. 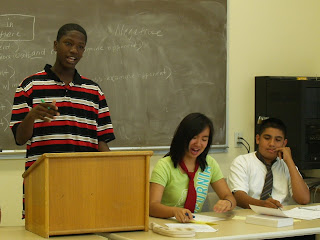 PCA courses have taught me that six weeks can positively transform a young student’s (and a young teacher’s) life. I first taught as a PCA instructor in 2004 and, having returned every summer since then, I have gained additional skills in empowering students by drawing them into a community of scholars. My own experience as the daughter of immigrants and the second person in my family (after my older sister) to attend college taught me that one needs a sense of academic belonging and intellectual community to succeed at the university and in careers beyond it. EAOP generates that sense of belonging by bringing students onto the Berkeley campus and by making them part of the university in a larger sense. Inspired by this vision, I have tried to teach my students not only to be transformed by college culture, but also to transform it by contributing to and, in some cases, even redefining intellectual debates.

Both English Department undergraduates and graduate students contribute to the program by working for EAOP in the summers. Last summer, I had the pleasure of collaborating with two undergraduate English majors who are both pursuing careers in education: senior Felix Chinchilla who served as a Teaching Assistant and junior Sarah Padula who served as a Tutor. Their skills in textual analysis and in working with students were essential to the success of the course. I am looking forward to returning to PCA as an instructor this coming summer, and I hope to report back on even more collaboration between members of the English Department and EAOP in future posts.

In the meantime, though its programs have been dramatically successful, EAOP faces funding challenges, and always welcomes donations. They are also constantly in need of volunteers (particularly those who are people of color, among the first in their family to attend college, graduates of under-resourced public high schools and/or bilingual) to speak to students and families about higher education: to describe their personal experience, to answer questions, and to speak to any concerns. If you are interested in volunteering for these crucial events, please email Chase Adams at eaop@berkeley.edu.