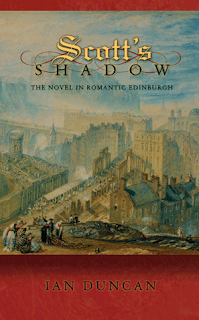 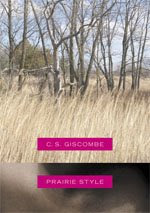 In the past year, Professors Ian Duncan and C. S. Giscombe were each awarded prizes for their recent books. Duncan’s Scott’s Shadow: The Novel in Romantic Edinburgh won the The National Library of Scotland Saltire Research Book of the Year, while Giscombe’s book of poetry Prairie Style received an American Book Award from the Before Columbus Foundation. Two graduate students, third-year Alex Covalciuc and first-year Rebecca Gaydos, have put together some reflections on the significance of these books, which, though different in scope and genre, share a deep and abiding interest in the influence of place.

Taking as its subject post-Enlightenment Edinburgh (a period stretching roughly from 1802, the year the Edinburgh Review was founded, to 1832 with the passing of the first Reform Bill and the death of Sir Walter Scott), Scott’s Shadow received recognition from the National Library of Scotland for the new insights it adds to the understanding of Scotland. Covalciuc, who has studied with Professor Duncan, details some of these insights:

“Duncan’s title evokes not only Walter Scott’s pervasive influence in the period but also, and more importantly, ‘Scott’s own presence,’ which, as Duncan notes, ‘was not reducible to any of its various public, private, and secret personae’ (xii). It is Duncan’s recognition of and detailed attention to Scott’s variegated ‘personae’—the most successful novelist of the period; his involvement, both as an author and subject, in Edinburgh periodical culture; his patronage of future literati like James Hogg—that makes Scott’s Shadow more than just a story of influence. Indeed, Duncan’s richly textured narrative of Scott’s involvement in Romantic literary culture makes almost-forgotten figures like John Galt newly interesting, at the same time as it reorients and rethinks our conceptions of canonized figures like James Hogg and Thomas Carlyle. Although Duncan focuses primarily on the literary culture of Edinburgh, his discussion of Scott’s influence, influences, and ubiquity as a man of letters provides revised accounts of Maria Edgeworth, marginal figures like Susan Ferrier, Scottish Romanticism as a literary movement and even the novel itself as a genre. The large scope and erudition of Scott’s Shadow, coupled with its careful and meticulous argumentation, will ensure that it casts its own long shadow of influence over the future study of Scottish Romanticism in particular, and British Romanticism more generally.”

Across the Atlantic, the American Booksellers Assocation recognized the way in which C. S. Giscombe’s book Prairie Style roots itself in a different kind of landscape by awarding it one of its American Book Awards. Established in 1978 by the Before Columbus Foundation, the American Book Award is unique in that there are “no categories, no nominees, and therefore no losers.” The highly unusual and unpredictable assemblage of recipients attests to the fact that the Awards “are not bestowed by an industry organization, but rather are a writers’ award given by other writers.”

Rebecca Gaydos, a student and friend of Professor Giscombe’s, describes how fitting it was for Prairie Style to receive such an award: just as the Awards aim at recognizing “literary excellence without limitations or restrictions,” Prairie Style is, for her, itself an exercise in unpredictability. She expands on this unpredictability in her account of the work:

“Hovering on the border between verse and prose, Prairie Style entertains the feeling and the fact of range. Thinking about neighborhood, location, and architecture, the book wanders from Frank Lloyd Wright’s Usonian homes, to the Robert Taylor housing projects of Chicago, to the campsites of the multi-racial, nomadic Tribe of Ishmael. Giscombe explores the ambiguity of location, and yet, ambiguity itself is interrupted by the certain and sudden appearance of animals (foxes on the prairie, crocodiles in the Caribbean). Giscombe engages the “slang and lazy talk” of jokes and love, as well as argument’s ‘formal economy.’ Prairie Style is about the shape of getting horizontal. It’s also about image, exchange, property, laziness, articulation, love, Frankenstein’s nameless monster, William Carlos Williams’ Elsie, the outline of appearances, Jamaica, the American Midwest… Prairie Style, like all of Giscombe’s poetry, does not lend itself to summation. Rather, it unfolds into a poetics of breadth and ambivalence: ‘I prefer going over the junctions to being part of the argument. I like two buses rocking perilously close and metaphor judging you. I’m partial to ugly. I vary about the point where pleasure’s a train of waves.'”

Please join us in congratulating Professors Duncan and Giscombe for their outstanding contributions to the arts and humanities.