Skip to content
What does it mean to be a public intellectual in 21st century America? And to what extent does the often intensely private work of an academic speak to larger issues in today’s world? 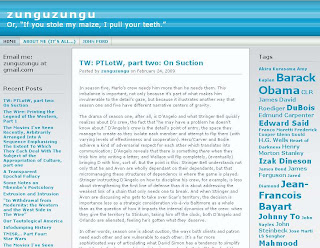 Two fifth-year English PhD candidates, Aaron Bady and Paul Kerschen, think often about these questions. Both Aaron and Paul are active bloggers – though with somewhat divergent styles and objectives – and they see the forum of the blog as a way to redefine the border between the private work of the academic and the public role of the intellectual.

Aaron’s blogging practices seem to exhibit this redefinition of boundaries most explicitly. He is present online in three different venues: his personal blog, the history group blog Cliopatra and the literary studies group blog The Valve. He started his personal blog during an extended trip to Tanzania –the blog’s name “zunguzungu” is a combination of the Swahili word for white person and for “dizziness,” especially the disorientation of love. From the reportage of his African travels, Aaron developed an online voice blending personal reflections with the more academic concerns which have led him to participate in more explicitly academic blogs. He reports that the practice of presenting intellectual ideas to a wide audience of educated readers has made him consider the practical terms of academic communication; the difficulties of writing between multiple audiences has forced him to rethink the assumptions and information he takes for granted that might prevent his readers (wherever they might be) from following his writing. In this sense, Aaron sees his blogging practice as an exercise in a radical interdisciplinarity – not just between discourses of History and Literature, but between the academy and the world beyond. Indeed, Aaron is particularly successful at bridging these boundaries: we are delighted to announce that his personal blog recently received Cliopatra’s “Best Writer” award for history blogging. As a result of this award, Aaron decided to “come out” as the writer of his personal blog, which he had been previously been writing under a pseudonym.

Paul Kerschen’s involvement with blogs participates in another kind of interdisciplinarity. As an English major at Stanford in the late 90s with an interest in computers and web design, Paul took a summer internship with IBM in the summer of 1998. 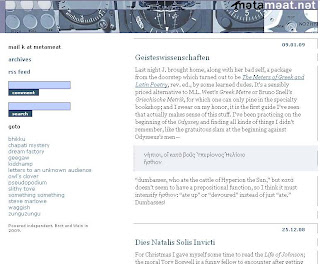 He reports that he helped to maintain a number of internal websites for the company, but that his skills in writing proved even more useful when the computer scientists needed to write a technical manual or press release. He also notes that, since summer internships like this often involve long stretches of idleness, he got the chance to read and puzzle over novels like James Joyce’s Finnegans Wake and Faulkner’s Absalom, Absalom! (Since both Joyce and Faulkner figure prominently in Paul’s dissertation project, one might say that IBM is responsible for his intellectual development in more ways than one.) Paul started blogging at http://www.metameat.net/ in 2000, when blogs were scarcer than today and often took more personal and idiosyncratic turns. He reports that his writing over the years has consistently taken advantage of the mediation provided by an online persona, which offers various sorts of protection or veiling, and therefore also a testing ground for his favorite modernists’ theories of the relation between author and text. Paul’s interest in veiling corresponds, in fact, to his role on this blog, since he is the technical wizard “behind the curtain” whose computer skills are responsible for the blog’s elegant appearance and smooth operation.

Given the potential for new kinds of connections and sociability which blogs make possible, Paul and Aaron note the rise of the “institutionalized” blog – newspapers, university presses and magazines have all begun an online blog component – but observe that literary studies is trailing fields like history and anthropology in this respect. Yet the English Department at Berkeley, whose faculty and students often write or think about media theory as an extension of the study of literature, seems an ideal place to explore the medium of the blog more explicitly. Because the literature taught in the English department in many cases predates not only the electronic medium and blog form but also the printing press itself, the writers we teach often meditate on the changing technology and new media responsible for the dissemination of their words. (Geoffrey Chaucer, for example, wrote a poem to the scribe who copied The Canterbury Tales.) Our own blog is thus also an exercise in this kind of meditation. Aaron has agreed to join Paul on the department’s blogging team and will be posting a weekly collection of interesting and relevant literary links, so that the UC Berkeley English department’s foray into the online sphere will contribute to the fullest extent possible to the public mission of the nation’s premiere public university.