Skip to content
In last week’s post, we focused on the ways in which two current graduate students are 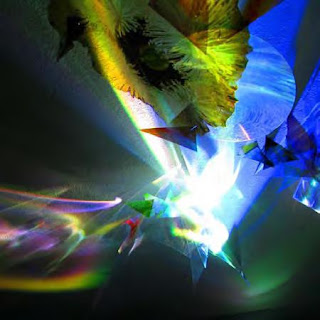 Artwork currently on display at the Alphonse Berber Gallery.

leveraging the new media of the blogosphere to disseminate critical thinking on history and literature in broad new ways. This week, we bring you examples of a different, perhaps more “concrete” kind of outreach by describing the efforts of the Department’s students to get out into the community with their thoughts on art and literature by opening a new art gallery and participating in poetry conversations on the radio.

Indeed, undergraduates Cameron Jackson and Jessica Cox have dived headlong into the community in their roles as co-directors of the newly opened Alphonse Berber Gallery on Bancroft Avenue across from the University. Housed in a beautiful 7200 sq. ft. Julia Morgan-designed building, the gallery had its grand opening on February 27 and presents the work of dynamic, aggressively innovative emerging to mid-career contemporary artists. It describes its inaugural show, “New Nature,” which runs until April 11, in the following terms:
“‘New Nature’ will focus on how fourteen West Coast artists engage with and interrogate their relationship to the natural world in ways that are personal, provocative, and at times seemingly hostile toward traditional notions of ecological awareness. The work of Reuben Margolin, Justin Margitich, and MachineHistories (Jason Pilarski & Steven Joyner) translates their experience of 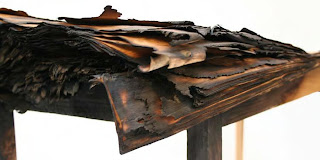 Artwork currently on display at the Alphonse Berber Gallery.

the wild, elemental, and biological into a mechanistic idiom. Viewers find themselves contemplating the natural by way of the very ontological mode that supposedly alienated them from it in the first place. In part, “New Nature” seeks to challenge the mindset that regards technology and environment as inherently opposed, exploring how they serve as means for engaging with and understanding one another. Imagining the possibilities for reconciliation, the artists presented in “New Nature” compel us to find new modes of participation in our continually evolving environment.”

In a somewhat different way, the department’s 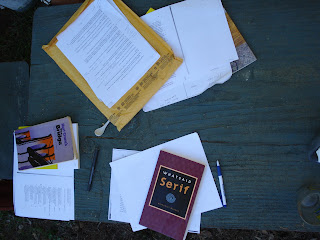 graduate students have also ventured out of the classroom and into the larger community. Second-year PhD student and practicing poet Gillian Osborne describes how Professor Cecil Giscombe (whose award-winning book we recently profiled here) took the helm of the graduate poetry workshop which the department offers each fall. Though the workshop had its usual diverse enrollment from a smattering of departments — from English to Public Health, with a variety of other Humanities sprinkled in between, Gillian notes that, with Professor Giscombe, something was different. His sights were set, she reports, on steering the class not only toward an expansion of their poetic practices, but also toward a broadening of where those practices might occur. Over the semester, they were to embark on an experiment of poetry in public.

This public was reached via the air, courtesy of a local radio station in Point Reyes, KWMR 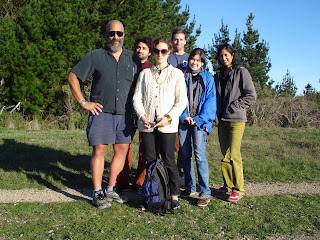 Professor Giscombe and his workshop in Point Reyes.

whose DJ Brian Kervin had invited the class to participate in the “Swervin’ Kirven Show.” The class thought about what poetry on the radio could mean, how it might sound. Making three trips to KWMR, each time with a different assortment of students from the class, the workshop conducted live and wandering conversations that forged their way into the thickets of debates over “poetry of place,” questions of form and translation, and investigations of different poetic registers. They read their own work as well as that of other poets, ranging from the deeply canonized to the insistently disruptive; there were contests—limericks and clichés—and callers. Gillian writes, “We couldn’t entirely anticipate what would happen, and, since allowing oneself to be surprised is an essential element to Cecil’s pedagogy and poetic approach, this was entirely the point.”

The English Department is proud to have such vibrant and pioneering students as part of its community.