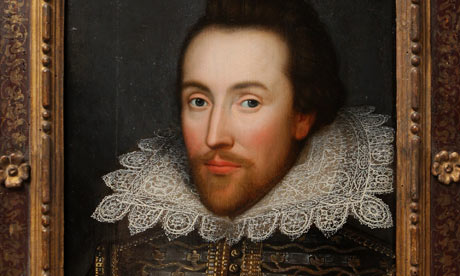 Everyone is excited that we have a new picture of the Bard. And isn’t he a looker! As reported in the NYT:

“His face is open and alive, with a rosy, rather sweet expression, perhaps suggestive of modesty…There is nothing superior or haughty in the subject, which one might well expect to find in a face set off by such rich clothing. It is the face of a good listener, as well as of someone who exercised a natural restraint.”

While the LA Times cheered that we are now blessed with a “hot young Shakespeare,” the Irish Times and Irish independent are quick to point out that the portrait hung for years winking at an Irish house in an Irish family.

Verlyn Klinkenborg is on the other hand, is more meditative: “The most that can really be said is that the Cobbe portrait…was probably painted in Shakespeare’s lifetime and that it bears a likeness to other reputed Shakespeare portraits…But given the stylized conventions of Elizabethan portraiture, a police dragnet in London circa 1610 might have turned up many dozens of men with a resemblance to this image. What we have, as always with Shakespeare, is a trail that leads us back to the past and dissolves into uncertainty…” And Andrew Dickson and Charlotte Higgins are more skeptical; Dickson notes that “this isn’t the first ‘new’ image of Shakespeare we’ve seen,” and despite the approval of Professor Stanley Wells (chairman of the Shakespeare Birthplace Trust) Tarnya Cooper, the 16th-century curator at London’s National Portrait Gallery is “very sceptical,” and notes that while she does “respect Wells’s scholarship enormously…portraiture is a very different area, and this doesn’t add up.”

In any case, the hits keep coming as architects discover the remains of Shakespeare’s first theatre (before the Globe) out in “the suburbs of sin” surrounding central London. The Tower Theatre company, which owns the site, plans to build “a 21st Century equivalent of the original playhouse, a ‘no frills, hard-working place of entertainment’ that would bring London theatre ‘back to its roots.'” And because it was the right time, apparently, the archaeologists even found a piece of 16th-century pottery with what looks like Shakespeare’s face on the site. “There is no proof that the face on the fragment of Beauvais pottery is the Bard’s,” Maev Kennedy reports, “but insiders are excited.”