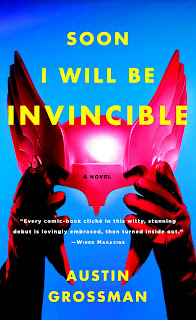 In what follows, graduate student Austin Grossman tells how he came to write and publish his novel Soon I Will Be Invincible during his time in the Ph. D. program. He talks about the process of creating the novel, learning how to move back and forth between creative and academic writing and the unexpected twists and turns that are integral to a life of letters.
The novel is a literary treatment of the the interior life of people enmeshed in a culture of superheroes and supervillains. As Austin puts it, “I can only describe it as silly and serious at the same time.”
***
I started in the English Ph. D. program in the fall of 2001. I knew Berkeley didn’t have an MFA program, and I came expecting to work as an academic, full stop.

The novel began as two or three short stories I wrote in Tom Farber’s graduate fiction workshop in my first semester. The first one gave me the voice and character and situation all at once – a frustrated graduate student, reborn as a mad genius bent on conquering the world (I refuse to blush at the transparency here!). More stories appeared, piled up and linked themselves in my imagination – characters, history, events. There was a tipping point late in my second year when I admitted to myself that the stories were chapters and that I was in fact writing a novel. Jonathan Lethem’s Fortress of Solitude coming out in 2003, which hardened my conviction that there was something here worth adding to the literary fiction world.

After coursework I stopped doing teaching and started writing full-time as I was preparing for orals. This was the crucible period – I worked and reworked passages over and over, structured and re-structured and re-re-structured the project, to what seemed like the point of insanity. I was conscious of working without the support and training an MFA program provides, and I might not have finished without a somewhat romantic vision of my situation – working alone, the odds against me, with almost no hope of recognition. I promised myself I’d finish it, and then all those who doubted me would be sorry, very sorry indeed!

I wrote on, and late in the process I showed it to an agent at Janklow and Nesbit (who also represent our own Vikram Chandra), who gave me some encouragement. A year or two(!) and countless rounds of editing later, I was taken on as a client by agent Luke Janklow, who saw the process through. The manuscript sold to Pantheon Books after an auction, and was immediately optioned as a film. I went on a nationwide tour, gave readings, sat on panels at Comic Con and read at literary evenings. The paperback came out this year from Vintage books. The book was nominated for a Sargent award. I’m working on the film adaptation, and writing a new novel.

It has all meant a change of life for me. I will always want to be involved in a literary intellectual culture, but it probably won’t be inside the academy. I never expected things to turn out like this, even as I was working to make it happen, and I’m profoundly grateful for it.

It’s hard to say what the relationship is between the academic and the creative work. There is the simple discipline of reading literary writing and criticism, having beautiful, varied, exacting writing to look at, day by day.

There is the constant imperative in critical writing to work out how to say fully and exactly what you mean, and you borrow this as a fiction writer. As a novelist you can set yourself any challenge in language you like, and find the truth and authority in it no matter how silly. In fact, I guess I wanted to put this to the test, by picking the silliest subjects possible – the challenge of saying vividly, plainly what it feels like to need to conquer the planet, or explaining who would win in a fight between a cyborg and a faerie. And why, exactly, and why it matters so awfully much to the cyborg and faerie involved.

And it does matter. Belonging to an English department makes you part of a community of people who continually make you aware of the value and stakes of literary writing, the feeling that what’s on the page matters. That it’s worth – more than worth – the passion and effort one invests in it. This is probably the most crucial thing of all, so it’s worth saying that although I didn’t write Soon I Will Be Invincible as part of the degree program, it would never have been written without it.

As a postscript, I’d like to extend an invitation to any fiction writers in the program who have more questions about the nuts and bolts of writing and publishing prose fiction – I’m more than happy to talk further about the process.