Skip to content
The issue of “relevance” is a constant concern among Humanities departments today, especially in these troubled economic times. How do you make literature interesting and important to a p 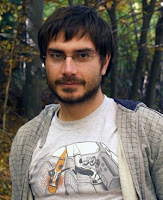 opulation that seems to be increasingly indifferent to, or perhaps simply too busy for, it? Third-year graduate student Dimiter Kenarov has some very strong opinions about questions like this one, and, as a freelance journalist and contributing editor to the Virginia Quarterly Review, he has put his thoughts into action. He has published an article on Milosevic’s Serbia (Summer 2006) which was the co-winner of the Staige D. Blackford Prize for Nonfiction, a piece on the Roma in Bulgaria (Summer 2008), which was recently selected for the Best American Travel Writing of 2009, and an account of the double identity of Radovan Karadzic, the “Butcher of Bosnia” (Winter 2009). The blog recently sat down with Dimiter to find out more about the relationship between his academic work and his journalistic pursuits.

Dimiter is a native of Bulgaria where he began writing short stories, poetry and translations from a very young age. Attending an American high school, he developed his skills in English and found that the Anglo-American canon offered new and exciting ways to think about cultural figures. Rather than the mythologized writers of the Eastern European tradition, the Anglo-American writers had a certain “coolness,” Dimiter says, a kind of humanity that made literature matter to him in new ways. His ambition was evident early on: he once waited outside the door of Bulgaria’s most important literary magazine’s editor to offer his translations of some poems by the American poet Theodore Roethke. (They were published, to much praise.) When he went on to study as an undergraduate at Middlebury College, he eventually wrote a senior thesis that compared the poetics of Joseph Brodsky and W. H. Auden and showed the revitalizing influence that English poetic tradition was able to have on Russian poetry.

This kind of revitalizing crossing is exactly what is at play in Dimiter’s award-winning journalism. He emphasizes the similarities between the research he does for his academic writing and for his journalism. If the former investigates the context of a literary work, the latter consists of interviewing people – rather than reading books – as a way of learning about his subjects. He reports, though, that he uses the same kind of critical thinking, measured questioning and imaginative analysis in both endeavors.

These skills were especially helpful in his well-regarded piece on the Roma in Bulgaria. An ethnic minority that lives under almost apartheid like conditions, the Roma – also referred to as “gypsies” – make up 6-7% of Bulgaria’s population. Inspired by a course on African-American literature that he had taken at Middlebury, Dimiter wondered why he knew so very little about the culture and ways of life of the Roma. He thus proposed his piece to the editors of the Virginia Quarterly Review and set off to Bulgaria to explore a part of his home country that was eminently foreign. Aided by a guide, he crossed the barbed-wire border of the Roma ghetto and immediately found himself as the outsider. As a reporter, he says, he was very much the wayward, traveling gypsy that he had expected to be investigating. The tables had suddenly turned. His training in 18th century literature also helped him contextualize the situation of the Roma, however, since the latter are alternately romanticized as some kind of “noble savage” culture (we might think, perhaps, of the “Gypsy King” in Fielding’s Tom Jones) or completely demonized as a dirty, subaltern race to be scorned. Dimiter’s piece traced the lack of incentive that the Roma have to assimilate with larger Bulgarian society and the roadblocks that are put up on both side of the divide which seems to co-exist with the developing integration of Europe under the growth of the European Union.

Back now in Berkeley studying for his qualifying exams, Dimiter reports that he is delighted to be a part of a department that fosters this kind of thinking “outside the academic box.” He enjoys his peers and mentors who, along with their dedication to literary scholarship, make time for other interests like music, social justice work and other extra-academic pursuits. For all the talk of the insularity and isolation of the Humanities, Dimiter sees Berkeley’s Department as being particularly – if sometimes almost invisibly — engaged with the world outside the walls of Wheeler Hall. He especially credits the administration and faculty of the department – particularly the support of the Graduate Affairs Officer Lee Parsons – who gave him the liberty and flexibility to pursue his interests, even if they didn’t seem, at very first glance, to line up with his specialization in 18th century literature.