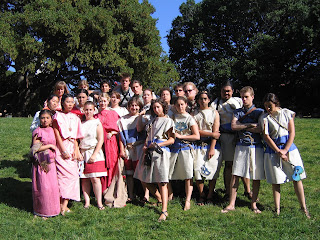 In what follows, Professor Kevis Goodman — usually a silent partner in the composition of blog postings — recounts the English Undergraduate Association’s recent staging of Shakespeare’s Troilus and Cressida.
Kyle Binkowski (Class of 2009) is drawn to plays that have never or have rarely been performed. This attraction started during the Spring term of 2008, when Kyle and a number of his classmates, who had just completed a semester of the English Department’s upper-division lecture course on John Milton, decided to produce the dramatic poem Samson Agonistes—a work that Milton insisted “never was intended” for the stage. It culminated last weekend (April 24-26) with a splendid production of Shakespeare’s Troilus and Cressida, perhaps the least frequently staged of Shakespeare’s plays. Professor David Landreth, who teaches Shakespeare regularly at the undergraduate and graduate levels, explains some of the reasons why. With its thirty different roles, Landreth commented, “not only are there so many characters for the audience to keep track of, but this bewildering variety of roles serves to articulate an even more bewildering variety of divergent and incompatible perspectives on the same events.” For these reasons and others, Kyle had initial trouble persuading the English Undergraduate Association to sponsor the production, but the EUA and other sponsors (the ASUC, the English Department) came through in the end and provided the necessary support, both moral and financial.

Several days after the performances, I interviewed Kyle, classmate Marc Juberg, who played a melancholy Troilus, and Kevin Ligutom, who acted the part of Diomedes. Marc and Kevin had previously collaborated with Kyle on Samson Agonistes—Marc playing Samson. A rarely 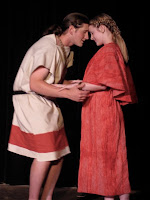 Marc Juberg and Ellie Garber as Troilus and Cressida respectively

performed play “is easier to make your own,” Kyle explained, because “the audience comes with no preconceptions about how it should be staged.” Moreover, Marc added, Troilus and Cressida is a drama that “speaks to a postmodern audience” in particular, because it “multiplies inconclusive endings,” resists closure, and “leaves its audience with unanswered questions.” “The exigencies of the present take precedent over happy endings and other formulations of fiction,” he continued, and “there is something very beautiful about that.” (Marc, in case you are wondering, is writing his senior Honors thesis on the play.) Kevin Ligutom agreed, pointing out that Shakespeare’s version of the plot flouts the expectations that most viewers bring to the enactment of the story of the Trojan War. Shakespeare’s Achilles (played by Zach Ritter, formerly the blustering giant Harapha in Samson Agonistes) is neither particularly heroic nor especially good in battle—in fact, he needs an entire brigade of Myrmidons to ambush Hector (David Andres Mejia) before he can kill him.

The logistical challenges were formidable for the entire cast. They had to locate rooms for rehearsals and acquire performance spaces large enough for the epic scale of the story and the size of the assembled cast. The usual division of labor between actors, on the one hand, and stage crew, costume designers, and set engineers, on the other, became irrelevant, as the cast came together to draw on their own resources. Aeneas (Lauren Mueller) and Andromache (Aileen Ritchie) designed the set, which was built and engineered with the additional help of Diomedes, Troilus, Achilles, Priam (Randy Eisenberg), Calchas (Jenny Elizabeth Oberholtzer), Thersites (Elizabeth Osborne), even Helen of Troy herself (Jerrine Tan), and others. Pandarus (Rachel 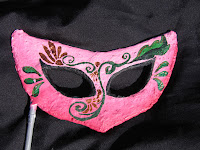 An example of the handiwork of Aileen Ritchie

Levinson-Emley) and Ulysses (Vivian Wauters) helped with the costumes, while Andromache crafted the beautiful masks that helped single actors play multiple parts. “I cannot stress the community aspect enough,” Kyle insisted, noting numerous unsung heroes, who labored long nights and hauled sets between the several spaces that the cast had wrested from several campus departments, which control them during the day. The blog, too, regrets that it cannot sing—or name—them all in this space.

The strong bonds forged were all the more remarkable because most in the group had never met each other; they came together from a wide variety of majors and with very different degrees of experience. Kyle’s open call to the campus netted both trained actors, well versed in Shakespeare performance, and first timers, discovering both the play and acting for the first time. Ellie Garber, who was radiant and playful as the unfaithful Cressida, has performed in many Shakespeare festivals, for example, while Agamemnon (Andrea Johnson), a Physics major, was encountering his work for the first time. Others fell in between, like the poignant and prophetic Cassandra (Hayley Housman), who reported that she “came into the play having taken English 117S [the department’s Shakespeare lecture],” and now, after “three months of living and breathing Shakespeare, [is] beginning to get a glimpse of the endless tragic, twisted, hilarious beauty that exists in his work.”

The performances draw enthusiastic reviews from the audience, which included veteran faculty instructors of English 117, including Professor Landreth and Professor Stephen Booth, the production’s Executive Producer. Professor Landreth wrote the blog that, in spite of his original reservations about the choice of this difficult play, he “was impressed by how continuously lucid the EUA production was, not to mention how frequently delightful.” He added that he found 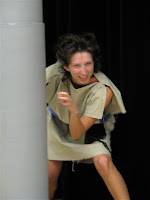 Pandarus (Rachel Levinson-Emley) “skilled and interestingly elusive, often making surprising plays for sympathy rather than going over the top with the character’s creepiness.” For o
ne GSI who came to the performance, “the star of the show was certainly Thersites” (played by the enviably limber Elizabeth Osborne), because “her tenacious interpretation of the character of the fool as equal parts devilish and humorous, wanting to bring others down but only as a way of surviving, brought the tenor of the tragedy into a more complex relationship with that genre.” This professor, who is so far gone as to confess her peculiar preference for Milton in general, felt that three hours went by without a moment’s notice.

Kyle, Marc, and other members of the cast are graduating this month, as are many of this year’s board of the English Undergraduate Association. But the EUA goes on and hopes to mount a Shakespeare play next year. We admire their energy and intelligence, and we hope they do, too.