Skip to content
In what follows, graduate student Natalia Cecire reports on a recent poetry reading with Maurice Scully and Anne Tardos.

As I entered Wheeler Hall that evening, the first thing I noticed was a crowd of undergraduates camped outside Wheeler Auditorium, a good forty-five minutes early for the budget crisis teach-in that would be held there. I surveyed the scene — some students standing and milling, others sitting on the dubious linoleum doing homework — then headed up the stairs toward the Maude Fife Room.
I was on time, which of course means early, Berkeley time, and the crowd was thin. The tech guy was having one of the night’s poets, Anne Tardos, test the sound equipment. Professor Dan Blanton, the chair of English Lectures and Events, came in to tell Charles Légère, co-curator of the Holloway Series, that he had “found them,” and “they” were now “in Eric’s office.”
“Eric” was of course Professor Eric Falci, one of the organizers of the reading, and as I later learned, “they” were the poet Maurice Scully and his wife, Mary Scully. By some mishap, they had never received the email that detailed all the necessary contact numbers and the actual location of the reading. But now everybody was found, and we were ready to start.
a certain braveness comes into it after a while
Professor Lyn Hejinian, co-curator of the Holloway Series, introduced the first reader, Anne Tardos, a composer and a painter as well as a poet. Tardos began with some poems from her 2008 book I Am You, sometimes described as an elegy, which is, according to Professor Hejinian, “not shy about grief, although it is often sly about it.” The book responds in part to the death of Tardos’s partner, the poet Jackson Mac Low, whose work Tardos recently edited in the 2008 collection Thing of Beauty, from our own University of California Press.
Tardos began with “Intermezzo by a Lake,” a poem of cycling repetitions and rhythmic play. Tardos introduced another poem by informing us that she’d planned to call it “Fait Accompli,” until she remembered that that was the title of Nick Piombino’s blog. “So I called it ‘Fat Accomplice,'” she concluded, later quipping, “homophones are useful.” Later she read from new work that, with humor and nuance, explored philosophical questions of human control, of embeddedness in the world, and of the possibility of communication. “Twitter ripped the veil off the other,” she read, “and we saw ourselves.”
Listen to Anne Tardos read at PennSound.
pleading for the sound of thinking

Professor Falci introduced Maurice Scully, an Irish poet with an impressive oeuvre, including his twenty-five year, multi-volume project Things That Happen. Scully’s poems “act as … colliders,” Professor Falci said, “with distinct and often discordant registers being set against one another, with seemingly incompatible formal mechanisms vitally intertwined.” Scully read first from Livelihood (2004) and Tig (2006), both from of the Things that Happen project. He alerted the audience in advance to the presence of Irish in the poems, observing that “in Ireland, we call the Irish language: Irish” (not “Gaelic”!). English, on the other hand, is evidently called “mouth-rubbish.”

Later in the evening, Scully read from a new extended project, The Dances, which aimed, in part, at the “almost impossible goal” of using sounds to emulate painting. Reading from his new book Humming, Scully evoked the processes, rhythms, and structures of our environment. “Snow,” we learned, “is one of the best insulators in the natural world.” 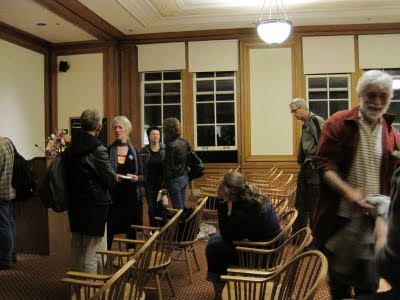 The Roberta C. Holloway Series in Poetry is currently curated by Lyn Hejinian and Charles Légère. Podcasts of all the readings are posted within a few weeks.