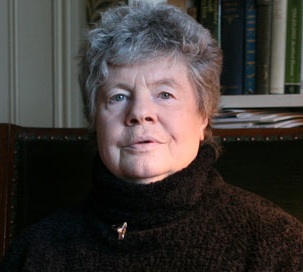 On February 25th, spectators filled all 150 chairs in Wheeler’s Maude Fife auditorium to catch a glimpse of esteemed novelist and critic A.S. Byatt. Byatt was invited by the department to speak about the relationship between writers and critics, and more generally, between literature and literary criticism. The event was structured as a round-table discussion between Byatt and four Berkeley professors, who joined her on stage: David Marno, Namwali Serpell, Kent Puckett, and Robert Hass.

Hass began the event, themed loosely around Matthew Arnold’s seminal 1864 essay “The Function of Criticism at the Present Time,”  by quoting Arnold’s famous adage about criticism: “Criticism … obeys an instinct prompting it to try to know the best that is known and thought in the world, irrespectively of practice, politics, and everything of the kind.” Byatt, who not only has written criticism, but who also writes critics into her novels as characters, proposed the concept of “respectful criticism” as a paraphrase of Arnold’s idea. For Byatt, this means having respect for language” and avoiding what she called critical “peacockery,” or the display of intellectual prowess for its own sake.

Byatt then went on to talk about her realization of the need for this sort respectful criticism while studying under F. R. Leavis–a critic very much in the tradition of Arnold–at Cambridge. Leavis, according to Byatt, went so far as to declare certain authors unreadable and to mock them viciously in courses and essays (apparently he particularly hated Robert Browning). In light of figures like Leavis, who so mercilessly wielded their critical axes, Puckett suggested that criticism, if misused, might have the potential to be “inordinate” (to use a word that recurs in Byatt’s own work) or even “dangerous.” Byatt responded by saying that criticism can indeed be dangerous, because it can affect taste so drastically. She went on to say that she believed the way for criticism to avoid being dangerous was for it to refuse judgment. Serpell proposed William Empson as a critic who did just that, by developing a style of criticism that, instead of seeking answers or judgments, celebrated difficulties, differences, and what she ultimately called “incommensurable imperatives.” Byatt praised Empson as a critic who, rather than resolving ambiguities in or between texts, “stood up between them.”

The event ended with a question from Marno concerning the possibility of an “agnostic criticism,” in which the critic could be thought of as eternally seeking after, but never finding (and perhaps never actually wanting to find) a judgment about a work of art. Hass responded that to engage in this sort of critical finding, you first “had to be taught to look.” He ended by saying that writing respectful, non-judgmental, agnostic criticism would be like falling in love: both make us see the world as if we had a “new set of eyes.”