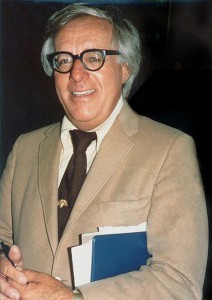 Second in the series is a reflection from Kathleen Miller (’13), who visited the Center for Ray Bradbury Studies at Indiana University.

The Center For Ray Bradbury Studies at IUPUI is tucked away in a little windowless room in a blue basement level accessible only by several flights of stairs and many doors; like the Sun Domes in Bradbury’s short story “The Long Rain,” the experience of arriving is comparable to entering one of those fabled yellow sanctuaries (albeit without the requisite “hot chocolate crowned with marshmallow dollops”). The bright and colorful swirl of movie posters, records, and memorabilia that adorn the walls faintly pulses with an inner vitality, as do the shelves of books themselves – a floor-to-ceiling compilation of anthologies, critical sources, and all kinds of edition runs, flanked in turn by banks of filing cabinets home to even more lurid spectacles of science-fiction grandeur. Cozy, warm, and made possible in part by wonderful folks from the Institute for American Thought who work on teasing out the finer points of textual editing and collations, I had come to the Center to immerse myself for the week in all things Bradbury, in preparation for the writing of my senior thesis. The Center’s director, Jonathan Eller, is one of the kindest and knowledgeable Bradbury enthusiasts you will ever meet; a continual source of passion and expertise throughout my time there, he constantly provided more materials to consider with every page that I turned. It was an incredible experience to jump back and forth between reading his recent work Becoming Ray Bradbury (2011) in tandem with the manuscript for his forthcoming sequel, Bradbury Unbound, not to mention conversing with the man himself – such that authorship took on a physical reality of exchange and interaction that transcended the printed page.

I marveled in the chance to look at early works and editions which have grown harder to get a hold of in the wake of Bradbury’s passing last summer, and hungrily poured through countless pages of pulp magazines in search of the material culture that initially nourished the fledgling writer. Indeed, as more avenues of exploration continued to emerge, I had to keep revisiting the projected scale and scope of my project and wrangle with the ever-shifting landscape of inquiry that unfolded before me. I even managed to encounter a distant part of my own flesh and blood along the way – my great-uncle, the fantasy writer and critic Jack Cady, whose work appeared alongside Bradbury’s in later editions of Fantasy & Science Fiction, and included a critical survey of American Literature. In tracing Bradbury across multiple mediums, I came to gain a richer sense of his mastery across genres, a mastery cultivated in part through respect for one’s predecessors, and underscored at times by uncertainty regarding his abilities as expressed in correspondence to his editor Don Congdon. His reverence for the past and the common ties that bind further resonated with my determination to pay tribute to someone who had held such a cherished place in my literary upbringing, and whose work continues to speak out in defense and praise of the collective voices which shape and make us. And I found myself equally indebted to my hosts in Indianapolis, who opened their homes, shared their stories, and let me sleep on their couches, renewing my hope in the goodness of strangers and the human heart, not to mention confirming the magic of networks like CouchSurfing.org which help make such connections possible.

Homeward bound after a long week of reading and devouring every source within eyesight, flying conditions were clear enough so that traveling over the continental U.S. by starlight nearly felt like soaring through space – a surreal and beautiful close to what had been a magical week of research, revelry, and wonder. From diving with Bradbury into the waters of Moby-Dick and his space-opera adaptation of the former, Leviathan 99, to peering behind all manner of masks and magazine marvels, I am humbled to have had the opportunity to be surrounded by so many great souls, a humming dynamo of collaboration and energy that has further ignited and nurtured my ongoing foray into the world (or should I say multiverse!) of science-fiction, fantasy, authorship, creation, and possibility. Pathology of authorship, I came to find, was really a reflection of my own obsession – living, breathing, and partially becoming Bradbury – and my project has since taken on a finer texture as a result of this immersive foray into his world. Much as he championed his literary heroes throughout his lifetime and through his writing (and even quite explicitly at times, elevating the likes of Edgar Allen Poe and Thomas Wolfe to living, breathing characters in some of his stories!), I can’t help but be drawn to the position of championing his legacy in turn. His conception of literature as a healing balm, a medicine for melancholy bridged by adventures of shared experience, is most evident in the truly prolific body of work he has left behind, whose pulp, flesh, and poetic spirit will continue to nourish readers for light-years to come.

I leave you all with Bradbury’s blessing –