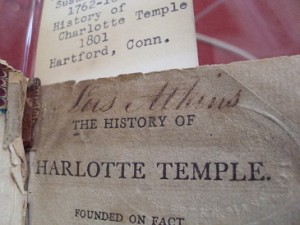 Third in the series is an interview with Lauren Ballard (’12), who worked with dozens of surviving original editions of Susanna Rowson’s novel Charlotte Temple housed at the American Antiquarian Society in Worcester, Massachusetts. She was especially interested in how American readers appropriated this late-eighteenth-century British novel as their own; she explored this process of appropriation by pursuing American editions containing information such as advertisements, sermons, illustrations with captions, marginalia, and deviations from the original plot. After returning from the archives, Ballard went on to complete her thesis on Charlotte Temple, under the guidance of Professor Joanna Picciotto.

In addition to her grant from the English Department, Lauren also received support from the Student Activities Center and the Center for British Studies.

What first got you interested in Charlotte Temple?
I was assigned Charlotte Temple in Kathleen Donegan’s class on “Early American Women Writers.” Once I started reading it, it was impossible to put down. That really surprised me. Most of the pre-1800 writing I had been studying I enjoyed for its historical richness, but the language was something you had to work through. But with Charlotte Temple it was the opposite. It grabs you and doesn’t let you go. I found it just as engrossing as any modern novel. A week later a friend of mine came to visit for the weekend. She’s not a big reader, but I suggested she read Charlotte Temple while I was busy doing my other reading. She had the exact same experience that I did. She couldn’t put it down and we spent the whole weekend reading until she finished it. When I started the English Department’s honors course [for senior thesis writers] I found myself thinking about Charlotte Temple a lot, trying to puzzle out how such a simplistic novel could retain such power after two hundred years. My argument for my thesis ended up focusing quite a bit on the interplay between genre and cultural assumptions of value.

What was it like working at the American Antiquarian Society?
If I had had any idea of how much material there was to go through I would have stayed much longer, but I was only there for four days. I crammed those four days. First I got to go into the archives to collect all of the existing copies they had of Charlotte Temple. They filled up two whole carts. At first I took very meticulous notes on each copy—binding, condition, who printed it when and where, and, of course, penciled notes, names, and other marginalia—but then I realized I was never going to get through all of that. So I tried just recording marginalia, but there was so much I still didn’t make it all the way through. On my last day I went through the entire periodical database. That went faster since it was all scanned into their computer system and I could just email myself whatever I needed.

Can you describe a typical day for you at the archive? How early would you arrive? How late would you stay? Did you have to call up books, or could you browse?
I would get up around 7:30, eat breakfast at the hotel, then catch a ride over to the AAS. I’d get there around 9 or so, work until lunch time. Break for an hour, then come back and work until they closed. Most days they closed around 5, but on Wednesdays they stay open until 8, so Wednesday was a long day. The first day I was there we called up all the books that I would use for the rest of my stay, and they kept that cart of books behind the main desk for me. Normally you don’t even get to go into the stacks, but the woman who was helping me was really nice and gave me a tour through the stacks as we collected the books. Usually you are also only allowed to take one book to your desk at a time, but since I had so many they let me take three at a time.

How was it working with such old papers? Did you have to take precautions? How did the pages/ink feel and look after all that time?
Working with the old books was amazing. I had to use a clear plastic book holder that kept me from opening the book at anything wider than a 45-degree angle. It preserves the binding and minimizes contact. Most of the books were remarkably well-preserved. A lot of them were much smaller than the standard book size today, like little pocketbooks. I even got to handle a Munro’s “Ten Cent Novel” copy, which is like a little magazine. There was a lot more writing and marginalia in them than I thought there would be. Anything written in pencil wasn’t legible any longer, but in ink there were crystal clear signatures from as far back as the 1790s.

Can you talk about some particular discoveries at the archive that you felt were especially interesting or surprising?
I found dozens of fascinating things that I wasn’t able to put into my thesis. For example, “Charlotte Temple” was a very popular name for race horses for at least 50 years. There was also an obituary for a former slave woman in Ohio who was named Charlotte Temple. And there were a few poems that I found written inside the back covers of the old copies. Of course I couldn’t read all of them because the handwriting is so different, but I could read snippets. They were about lost love and death and such.

In addition to your work at the archive, you also found time to visit the mythological grave of Charlotte Temple in Trinity Churchyard in Manhattan. First, do we know why there is a grave for a fictional character at all? Who put it there and why?
Supposedly, the grave belongs to Charlotte Stanley, on whom the novel Charlotte Temple was based. She was from a prominent English family, eloped with Colonel Montressor during the Revolutionary War, and died in America. Several accounts say that she was buried in the Trinity Churchyard with a silver plate on her grave that said “Sacred to the memory of Charlotte Stanley—aged 19 years.” At some point, the plate disappeared. Some accounts say it was stolen and others that it was removed by relatives of the family. After the plate was gone someone carved the name “Charlotte Temple” into the grave.

Being able to see the grave ultimately played a large role in your thesis. Will you speak briefly about your visit to the grave and why it mattered to you so much?
Seeing the actual grave was awesome. It’s very rare for literary history to exist in a physical space like that, where you can see it and touch it and take a picture of it. Given how contradictory the historical accounts were, it was amazing just to know that it really is there. It also helped tremendously with sorting out the historical accounts. For example, there’s a blank rectangle where the stone is distinctly lighter. That’s where I assume Charlotte Stanley’s plate used to be, so that gives credibility to the whole tale of the silver name plate being pried off. I would have had no way of knowing that if I hadn’t seen the grave in person. I was very interested in how people in the nineteenth century engaged in the debate on how much of the novel was fact and how much was fiction, and the grave came into that argument.

What have you been up to since graduating from Berkeley?
I’ve been teaching English as a second language at Buddhist school in Thailand.

Have you visited any other archives since graduating? Is it something you could see yourself doing again?
I would definitely like to do it again, but I probably won’t get another chance until I bite the bullet and go to graduate school. Right now I’m trying to take advantage of my freedom while it lasts. I’m enrolled in a travel-writing course and am planning my next moves for when my teaching semester ends here in Thailand. I intend to come back to the Academy eventually. I miss being able to nerd out over old books with other English folks. But it may be a while before I make my way back.