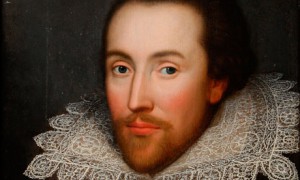 Simon Palfrey, Professor of English Literature at Oxford, traveled to Berkeley on April 1st to give a talk entitled “Shakespeare: Where is the Life?,” drawn from his forthcoming book entitled Where is the Life?: Shakespeare’s Possible Worlds. The event was sponsored by the English Department, the Center for British Studies, the Townsend Center, and the James D. Hart Chair in English.

Graduate student Richard Lee introduced Palfrey by describing the astounding breadth of his contribution to the study of Shakespeare, including three full-length books and innumerable articles (Palfrey has also co-written a novel). Lee finished by remarking that, taken as a whole, Palfrey’s work has “re-invigorated the study of Shakespeare through intense close reading and attention to detail.”

Palfrey began his talk by asking: “What world are we in?” For Shakespeare’s plays, Palfrey explained, the answer to this question is not always simple. Another way to phrase the question, in terms of Shakespeare, would be: “What is the plot of a play?” Palfrey believes there are two ways to answer this. One way is by pointing to what are called “plot scenarios,” which were the summaries of events in the play distributed to theaters and used in advertising performances. Another way is to look at the breakdowns of parts for individual actors; these are the “parts” that define each individual actor’s role in any given scenic block. Palfrey suggested that Shakespeare wrote “to parts and for parts,” rather than for plot scenarios. The problem with scenarios, as Palfrey said, is that they imply that a plot can be fully exhausted by description and summary. By attending to the parts for each actor in each scene, we can re-envision Shakespeare’s plays as collections of such parts—”Each one,” as Palfrey noted, “potentially a whole, an essence, a world.”

Palfrey expanded on this idea by describing the parts in Shakespeare’s plays as forming complex “ecologies” on the stage. Palfrey quoted Timothy Morton to elucidate the term’s relationship to literature: “[an ecology] is a vast, sprawling mesh of interconnection without a definite center or edge.” In relation to Shakespeare’s parts, this means that each part does not remain static in relation to the parts of other actors on stage in any given scene. Rather, there is a give and take between them: an organic, living relation. In these so-called “ecologies,” parts can can engage in rivalries and alliances; can multiply and disappear; can combine and divide. As Palfrey went on to say, scenes can also generate “virtual” parts: “parts within parts within parts … parts breeding other parts, each a whole.”

The crux of Palfrey’s argument is that, though we normally “grant life to easily summarizable elements” of a plot, as with a plot scenario, in Shakespeare the life is in the parts. This has two major consequences for Shakespeare criticism. First, it provides a way of talking about Shakespeare’s multi-voicedness; on this point, Palfrey suggested that Shakespeare was “frustrated by the necessity of being tied to a single speaking voice in any given moment” and that he strived to find ways of mimicking the “overlapping parts” of a piece of music. Second, by acknowledging the life of Shakespeare’s parts, we recognize that the whole of any play cannot be pre-supposed. There will never be a scenario vast enough truly to contain it. Instead of in this mythic ur-scenario, the life of a play lies in what Palfrey called “the wounds of the work,” the highly-complex, ever-changing relations between many different parts in tension on a stage in any given scene. To enter into these “wounds,” or these relations between parts, we must distrust the need for coherence and reject the need for plausible narratives for the relations between parts. Or, as Palfrey finished by saying, to find the life in Shakespeare we need to “derange the senses, escape our daily bodies, and leave behind what we expect to occur.”