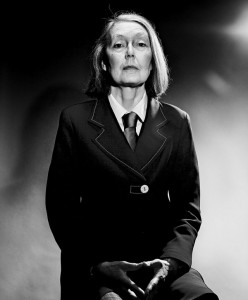 On April 17th, hundreds of spectators filled Wheeler’s Maude Fife Auditorium to hear Anne Carson read a selection of poems from her new volume Red doc>. The event was The Holloway Series’ last of the year.

Graduate student poet Gillian Osborne read first, choosing a selection of new poems. Beginning with a poem styled on John Donne’s Devotions upon Emergent Occasions, and following that with one on the French Revolutionary Calendar, her work set up Carson’s well, because it began with concrete historical and scientific sources and then freely improvised around those sources (many of Carson’s poems, including those in Red doc>, do the same with sources ranging from Greek myth to Proust). In her first poem, for example, Osborne explored an early-modern/modern conceit by colliding natural and contemporary imagery, as in the following line from early in her poem: “The leaves are elevators.” Osborne continued to explore juxtapositions like this throughout both of her first two poems, which swirl with scientific and historical facts, even as they project exceedingly non-factual emotions, moods, and states of mind. Osborne finished with an elegy entitled “Garland.”

Next on stage was Michelle Ty to introduce Carson. Ty talked about a number of aspects of Carson’s life and work, including her training and teaching as a classicist, her competence as a translator, and her creative shatterings of traditional barriers between literary categories like “poem,” “novel,” and “criticism.”

Carson began her reading with a poem entitled “The Albertine Workout.” The poem centers on Albertine Simonet, a character in Proust’s À la recherche du temps perdu. In the novel, she is the narrator’s love interest and, ultimately, his obsession. Carson’s poem, which proceeds in a series of short, numbered prose-verse units, explores both the character of Albertine as she appears in the novel and a critical-historical question surrounding a possible link between Albertine and Alfred Agostinelli, Proust’s chauffeur (which link Carson claims is called “the transposition theory”). Carson goes through the evidence for and against this theory, calmly splicing facts with close readings with witticisms with cleverly unimportant statistics—along the way, poking just a little fun at literary critics who lose so much sleep over the Albertine question. To take just one example: Carson gives us the half-comic, half-diligent observation that Albertine “appears on more than 800 pages” of the novel and that “on a good 19% of those pages she is asleep,” even as she also gives us original and serious close readings: “Albertine’s death removes only one of the Albertines he would have to forget.”

Carson followed with “Musk Oxen Song” and then an extract from a larger scene on a musk ox named Io waking up, both from her new volume Red doc>. They were reminiscent of Osborne’s reading, in that both mix “factual” information with lyrical, even whimsical descriptions: lines such as “Musk oxen are not in fact oxen” exist in very productive tension with ones like “blood crisping along arteries.” Carson next read a poem entitled “Time Passes,” which riffs on the famous second section of Virginia Woolf’s To The Lighthouse. Carson cheekily began the poem by saying “stole that from Virginia Woolf.” After reading a few more, briefer selections from Red doc>, Carson finished with a poem entitled “Mothers.”