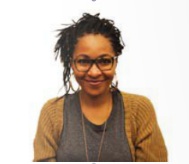 Fifth in the series is a reflection from Nashilu Mouen-Makoua (’13), who explored three different archives in France (the Assemblée Nationale, the Abbaye d’Ardenne, and the Bibliothèque Littéraire Jacques Doucet), each housing different manuscripts related to the poet and statesman Aimé Césaire.

This winter break, thanks to the generosity of the English Department and the Institute of International Studies, I traveled to France to visit three archives that house manuscripts of, and documents relating to, the Martiniquan poet-statesman Aimé Césaire. Césaire’s poem Cahier d’un retour au pays natal (Notebook of a Return to the Native Land) is well-known, but the version that has been canonized is a heavily revised version from 1956, when Césaire was in his forties. I was curious about the three earlier, less explored versions of the Cahier, published between 1939 and 1947: each version is substantially different from its predecessor and pegged to a key moment in Césaire’s political career. I hoped to trace the journey of the poem and of Césaire’s life from the late-1930s (when he was fresh from Paris’s Ecole Normale Supérieure) to the mid-1940s (when he was mayor of Fort-de-France and a deputy to the French Assemblée Nationale) to the mid-1950s (when he published the most well-known version of the Cahier and his biting Discourse on Colonialism).

On my first day in Paris I boarded the Metro, pain-au-raisin in hand, and set out for my first archival destination: the Palais Bourbon, home of the Assemblée Nationale. Upon arrival, I was handed a rather official “Researcher” badge and a map detailing the location of the reading room.

The library of the Assemblée Nationale seems to have remained untouched since its construction in 1848. The ceiling, originally painted by Eugène Delacroix in the nineteenth century, depicts the French Revolution and the history of the Republic. Buried among century-old books, I waited for Césaire’s typescript of the Cahier d’un Retour au Pays Natal to arrive. My initial sense of awe only deepened when the manuscript finally arrived before me. Turning pages that this man had once held and putting my finger where his had once been was incredibly moving. For a couple of hours I lost myself in that room, putting aside my student self and appreciating instead the work of a man that I have followed and admired for a long time.  Studying the original typescript has been invaluable to my project, as I have been able to compare it to the first published version of 1939. Fascinatingly, there are handwritten additions to the typescript that Césaire stitched into his piece following a conversation with an unknown publisher.

The next step of my trip brought me to the Abbaye d’Ardenne, a thirteenth-century  abbey on the outskirts of the Norman city of Caen, surrounded by fields and forests. The Abbaye is home to the Jacqueline Leiner archives. Leiner was Césaire’s close friend and his official biographer until she passed away. Because of its secluded location, the Abbaye d’Ardenne provides full boarding; researchers dine together and discuss their findings. It was at this archive that I felt most motivated as a researcher. Surrounded by other scholars, I felt myself become one; my research took on new importance and responsibility for me.

Leiner’s papers document Césaire’s life from a third-person standpoint. In the seven boxes brought to me, I found cut-outs of interviews given by Césaire, reviews of his plays, programs for events given in his honor and articles written on him by his contemporaries. This archival trip allowed me to understand the context in which Césaire was working from the late-1940s to the late-1980s. Some of the most illuminating material included an interview given to a small Martiniquais newspaper (Le Progressiste) in which Césaire reflected on his friendship with the French Surrealist poet André Breton and on the influence of Breton on his life. This made for an incredible counterpoint to the material that I found in the third archive of my trip: the Bibliothèque Littéraire Jacques Doucet.

Upon my visit to this third library, I was able to read Aimé Césaire’s correspondence with André Breton between 1941 and 1947. It was here that I came face to face with not only the poet’s hand but also his personal life. The experience brought me closer to my subject, allowing me a privileged insight into a small but consequential moment in his life. I was particularly moved by Césaire’s description of the difficulties he faced while living under the Vichy Regime in Martinique during the French Occupation.

When I returned to Berkeley, I felt reinvigorated by my trip. I sensed that I had something of my own to add to the ongoing conversation around Césaire’s legacy, and I have aimed in my thesis to reopen the doors of interpretation on Cesaire as a crucial literary and historical figure. I sincerely hope to do his memory justice as I follow through on a project that seeks jointly to celebrate his art and understand his person.