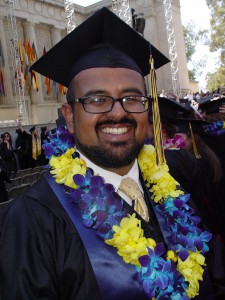 The English Department encourages its undergraduates to pursue serious archival research. Sixth in our “Lure of the Archive” series is a Q&A with Christian Durán (‘13), whose senior honors thesis — “Reconciling Daniel Venegas: Las Aventuras de Don Chipote in the Balance of History” — was recently recognized with an honorable mention from the Undergraduate Library Prize, one of Berkeley’s most distinguished awards for undergraduate research. The Library Prize committee, in its citation, called Durán’s work “an object lesson in the value of tenacity in research.” We recently caught up with Durán, fresh from graduation, and posed him a few questions about his own adventure writing his honors thesis.

I see your thesis as equal parts literary criticism and detective story: you’re giving us not only a fresh interpretation of the novel The Adventures of Don Chipote (1928), but also a fresh understanding of its author, the elusive and complex Daniel Venegas. Why were you drawn initially to The Adventures of Don Chipote? What makes it a fascinating novel, in its time or ours?

I first heard of Daniel Venegas’s Don Chipote while reading Culture Across Borders:  Mexican Immigration and Popular Culture, an essay collection edited by David R. Maciel and Maria Herrera-Sobek. I was really interested in Mexican migrant narratives and the effects of migration on people on a social and psychological level. Maciel and Sobek’s book referenced several migrant novels, but I was intrigued when I read that Nicolás Kanellos, a professor of Chicano Studies at the University of Houston, had dubbed Don Chipote the “first Chicano novel.” Kanellos was also the scholar who, fifty-six years after Don Chipote had been published in Los Angeles, unearthed Don Chipote in a Mexico City archive. His superlative estimation of the novel compelled me to check it out.

Don Chipote itself is very interesting.  As you can tell from the way its title gestures to Cervantes’s Don Quixote, it is a picaresque novel. It appears to be, at first glance, a critique of American society and its effect on Mexican immigrants. Its critique, though, is achieved through the use of self-deprecating humor — humor that often comes at the expense of the migrant. It is a great piece of comic satire, but what I feel makes it fascinating are the complex elements that came together to produce it: debates over labor, class, and loyalty to nation and race; Prohibition; the effects of the Mexican Revolution (which resulted in the largest migration of Mexican citizens to America up till then). All these issues, which stirred the Mexican-American community in 1920s Los Angeles, factor into the novel. It was an exhilarating time to be a migrant. I suppose it still is.

How did you get drawn into the ‘detective story’ side of things? What was the mystery posed by Daniel Venegas and how, concretely through your research, did you try to solve it? How did you go about reconstructing his life?

It’s funny. When I first opened the English translation of Don Chipote I saw a very poor- quality, grainy picture of its author. In hindsight, the fact that his face was half-covered in shadow seems to me to predict what was going to be a big part of my project—bringing Daniel Venegas to light. I might have tried to examine the novel on its own but I kept bumping into its author while reading it. The novel is very meta in that sense: Venegas keeps interrupting his own story to tell you about his experience and the things he considers significant.

I thought that it would be important to learn more about Venegas, so down the rabbit hole I went…

And you know, the more I learned about him, the more mysterious he became. I thought it interesting that Daniel Venegas would write a novel that painted life in America as something impossibly precarious. Especially since his own life in LA — as a playwright, journalist and businessman — was relatively successful.

I went about piecing together Daniel Venegas’s life by connecting dots across different genres and by using different sources. It was hard to determine what sources I should trust most: what do you take as autobiographical material?  The immigration and labor documents he signed his name to, which come out of their own charged negotiations? The newspaper articles he wrote for his satirical weekly El Malcriado (The Brat), which have their own spin? The autobiographical blurbs that he stitched into the novel itself?  I tried to look at the different ways the information fit together.

In terms of my method as a researcher, I used genealogical websites, like genealogybank.com and ancestry.com, to locate a lot of newspaper articles and official documents that mentioned Venegas. And once I knew that Venegas had appeared in La Opinión and El Heraldo de Mexico, UC Berkeley’s library became an invaluable resource. They have a great microfilm collection!  All the pieces began to fall together.

I can’t say that my research solved the mystery that surrounded Venegas. It was more that it revealed the complexity of the author. He was writing at a complex time. My research confirmed that complexity.

What surprised you as you assembled the fragments of his life? How did you feel that Venegas had been misunderstood by previous critics of the novel?

Initially, I wanted to resist the idea that Don Chipote was a celebration of Chicano identity. I jumped to judgment and assumed too much about Venegas: at a certain point, I had convinced myself that Venegas was an opportunist and hypocritical turncoat. The more I discovered about him, the more I saw that he was a product of a very complicated society. So while I don’t think Venegas was a clear pioneer of Chicanismo, I’ve also given up on my attempt to discredit that claim. Now I see the novel as a part of Daniel Venegas’s intricate attempt to navigate his own path in the world.

I began this project wanting to find a migrant narrative that would somehow reflect my own journey. I was frustrated by the fact that every novel I read failed to capture that for me. I initially saw this as a fault in the literature.  I know that sounds really egocentric, but that’s the way I saw it. I think I was hypersensitive to any part of the literature that I felt was either racializing or disingenuous. So this experience has taught me a lot about my own personal journey and that of others — and it has done so by helping me look at migrant novels in a different way.

I think the moment we start expecting the novel to show us a representation of a whole population’s experience, we risk misunderstanding that population. My story is not Don Chipote’s story, and that is all right. The story of Don Chipote, a bumpkin of a migrant, is obviously not Daniel Venegas’s story. Now I think that, to understand a migrant narrative, one needs to do a lot more work, provide a lot more contextualization. It should be a way to understand one person’s perspective; we shouldn’t take one perspective as representative of everyone else’s.

You’ve now spent six months reconstructing the life of Daniel Venegas and thinking seriously about The Adventures of Don Chipote. How does the novel seem different to you than when you embarked on this project?

The novel was central to my argument at first. I wanted to make my argument based on the novel itself and what I could glean from it.  But now that I’ve uncovered so much about Daniel Venegas and his socio-historical milieu, the novel is no longer so central to my argument; I see it more as a piece in the patchwork of Venegas’s life. I can’t say that the novel is or is not representative of the “Chicano experience,” but I might venture to say that if we take the complexity of Venegas’s life, with all its contradictions, and understand it as a whole, then we can get a clearer picture of how multifaceted the Chicano experience really is.