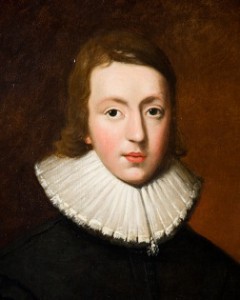 At the end of every spring semester, the English Department awards the Bronson Prize to the graduating senior, whose thesis is deemed the best that year. In 2013, it looks like we couldn’t choose: both Stephanie Ranks and Lily Rosenthal received the prize. Remarkably, both wrote on 17th-century poet John Milton. In separate reflections, Stephanie and Lily discuss the pleasures and difficulties of reading and writing about Milton.

Writing an honors thesis was easily one of the most grueling things I have ever done.  And I definitely mean that in a dual sense: there were times when I felt like all the thoughts my head could possibly contain had somehow liquefied and congealed into a single undifferentiated mass, churned into one sticky self-entangled glop.  No matter where I was or what I was doing, everything always managed to circle back to Milton.

And I suppose that was an unavoidable effect of spending such an inordinate amount of time with him in my head.  Because of course, that’s what Milton does: he gets in your head.  I had wondered for years, ever since my very first introduction to Paradise Lost in freshman year, just what exactly it was about Milton that was so endlessly captivating.  How could one poet continue to engage audiences so deeply after so very many years?  Why did we, as literary scholars, keep coming back to read him again and again?

So I read more.  And more.  I kept reading and rereading his prose, his poetry, his history, everything that was even tangentially connected to him, and over time I realized that the answer to the question was the question itself.  We are drawn to Milton because he draws us in.  My thesis ended up centering on a re-evaluation of Milton’s career, on what I call his “theory of engagement.”  Milton seized upon the (then still new) technology of print and its ability to establish intimate connections with readers, to form in essence, what he felt was a truer communion of souls than the traditional Catholic practice of consuming the eucharist.  This was predicated on the notion that when you read printed text, what is written is literally transubstantiated into voice inside your head.  We experience text as speech.  And to be able to hear someone else’s thoughts inside your head alongside your own is perhaps the most intimate connection possible between two human beings, a connection that transcends even time and space.  For Milton, this intimacy was necessary in order to fully engage with the ideas of others in an ongoing process of Truth-building that demanded readers be both wayfaring and warfaring in their encounters with new ideas; in order to arrive at knowledge, which is Truth, we must engage in this process of intimate discourse and then weigh what we learn against our own reason and decide for ourselves whether it is virtuous or not.

In the course of inhabiting the words of Milton, I found myself coming to terms with the root of why I started studying literature in the first place.  To form that intimate relationship between author and reader is to house in your mind, for a moment or a lifetime, the voice of another person.  And to engage with that voice, to actively participate in this truth-building process is what we routinely do when we study literature: we read and listen in order to better understand each other.

“But I can’t say I want to write on Milton,” I told a friend who was also applying to the honors thesis program, wringing my hands anxiously. “Everyone is going to want to write on Milton.” I don’t know if I’ve ever gotten a more pitying look. Of course, she was right: Milton isn’t any more popular with most contemporary English majors than he was in his days at Cambridge, and I think that’s a shame.

I’ve been fascinated by Paradise Lost since my first year at Berkeley, when Professor David Landreth introduced it as “an epic about losing.” Paradise Regain’d, the poem with whom no one wants to dance at a fancy-dress party, caught my attention in Joanna Picciotto’s class the following year—in fact, my curiosity as to why Paradise Lost’s Satan was so different from the Satan who appears in the sequel poem, a question which prompted my entire thesis, arose from a paper written for that class.

There’s an incredible amount of existing scholarship on Paradise Lost, and a fair amount on Paradise Regain’d, but almost none tackling the two texts in relation to each other. When they are discussed jointly, the focus is usually contrastive. That seems to me to do both epics a great disservice. The poems are different—Milton made sure of that—but I was and am much more interested in how that disparity reveals a meticulously planned connection between the two works. Part of the argument I explored in my thesis was that, as an explicit sequel and the completion of an unfinished project of individual readerly redemption begun in Paradise Lost, Paradise Regain’d is inseparable from the first epic, and vice versa. Splendid though it is, Paradise Lost is only half the story. Paradise Regain’d does not preen under the spotlight the way Paradise Lost does (such was not its upbringing), but it belongs there just as surely.

At first I was worried that my initial research idea would dead-end, that I would have to do something new, or even that I would want to do something new. But the spectacular thing I found about working with Milton’s poetry (and, indeed, his prose) is that the trouble lies not in extracting meaning, but in deciding what, amidst the wealth of potential information offered by each word, to focus on. I was asked “why Milton?” more than once over the last year, the implication often seeming to be “why Milton, when you could write on anything?” But really, if given the chance to write on Milton, how could I be expected to write on anything else?