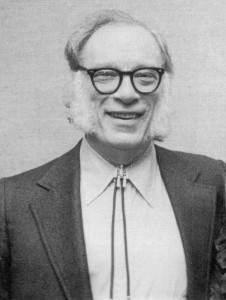 Below is a reflection from Bonnie Kim (’13), finalist for this year’s Bronson Prize, on her work with Isaac Asimov’s robot novels.

My obsession with Isaac Asimov began when I discovered that he had died in 1992, one year after I was born. I couldn’t help feeling an intense sorrow when I realized that I had shared one year with the sci-fi author, on this same planet, just before he passed away—although of course this was entirely coincidental. At the risk of sounding overly romantic, I would have to say that it was this very fact that determined that Asimov would hold special place in my heart, both as an author and as a person. And in the end I chose to take up my own unspoken instinct and indulge myself: for what else could I do but enjoy every aspect of my literary experience?

My adventures with Asimov took off with his fourth robot novel Robots and Empire the summer before my senior year. I later realized it was far from Asimov’s best work, but the book swayed me so much so that I decided to abandon my original thesis. I had been deeply involved with the Bancroft Library’s own Mark Twain Papers since the previous semester, originally intending to discuss the newly-discovered revisions of Twain’s Adventures of Huckleberry Finn. I had been fascinated by Twain’s ability to inject humor into his weighty social commentaries—and vice versa. Either way, it had certainly been a worthy topic and I was lucky to have access to the resources available on this very campus. But upon reading Asimov, I decided against it. In part it was because Mark Twain had plenty of scholars already, and I didn’t see what I as a mere undergraduate could possibly contribute to his massive legacy. In part it was because, simply put, Mark Twain seemed to me a relic of the past, whereas Isaac Asimov seemed a relic of the future.

Asimov didn’t necessarily revolutionize the literary world. He was incredibly influential in the genre of science fiction, but many would argue that his contemporaries Ray Bradbury and Robert Heinlein were the bigger names in mainstream publications. Asimov himself admitted that he didn’t write with any particular flair. He claimed instead that his inornate, plain style of writing was his biggest strength—for in all things he wrote with the utmost clarity, whether fiction, non-fiction, or letters to his friends and family. But he was right to follow his gut: his writings granted his ideas such translucency that, no matter the audience, no matter the reader, they would inevitably gain new knowledge and understanding. Asimov knew that his genius lay in his tremendous intellect and expansive imagination, and he allowed his writing to accentuate his talents. And it was this quality that truly captivated my heart.

I was very happy to discover that Robots and Empire was the fourth in a series of robot novels; and also that Asimov had written an entire treasury of robot short stories. And why not robots, indeed? Those human-yet-inhuman beings, those personalized and subservient creatures, those machines designed to change the world, for better or worse. Robots captivated my imagination, and they held such immense potential for growth and development—as much, it seemed, as humans themselves. Mankind would inevitably see itself reflected in the metallic shells of these curious figures, no matter whether they physically inhabit our space alongside us.

And I just couldn’t resist a good robot tale. Whether the technology proves to be feasible, as in Asimov’s selenium-mining robot Speedy; or utterly implausible, as in his mind-reading robot RB-34, I couldn’t deny the combined societal and literary implications Asimov strung throughout his fictions. It seemed that Asimov approached science fiction scientifically: he took infinite numbers of variables and imagined each possible permutation, guiding the reader with ease and fluidity. In one story he would depict a robot’s use of its superhuman wit to escape detection; and in the next he would re-circuit another robot to create a developing technological baby.

And his spell over me reached into the structure of my very thesis, as well. As my thesis class discussed various ways of approaching not only the subject of our thesis, but our presentation, one particular idea caught my mind. Our colleague (and Bronson Prize finalist) Prachi Naik mentioned that her thesis about the literary effects of colonialism in Southeast Asia could be crafted around the imagery of brewing a perfect cup of Chai tea. When I heard her I was struck—for what better place to implement the imagination than in my own presentation of science fiction? In which elements of fantasy and scientific believability merge; it seemed perfect. Prachi’s brilliance, together with the stirred pool of my own visual imagination, eventually birthed my own structure of the robot anatomy.

My thesis would be transformed into an exploration of robot anatomy, and thereby the essence of robot existence. From the moment I penetrated the robotic skin, through my explorations of the robotic brain; from robotic hand, to robotic heart, to robotic tongue; I would investigate each physical aspect as presented within Asimov’s short stories and novels, and then parse out the symbolic interactions between the physicality of the robot body, and that of the human body. It seemed the perfect tool by which I could explain Asimov’s vast imagination, for his own fictional writing often dealt with detecting and wrangling the nuances of language.

Asimov may not have taught me how to write with literary weight, but he certainly challenged me to endlessly expand my imagination. There was a reason why space travel was so compelling to the audience of its time; why technology has had such a large influence over the media; whether in wild optimism for a utopian future, or in the devastating pessimism of the apocalypse. As a scientific mind, Asimov’s brain was geared toward exploration in theory, rather than in action. And what better place to explore abstracts than literature, which collects the powers of imagination from readers all across the nation, and all across the world?