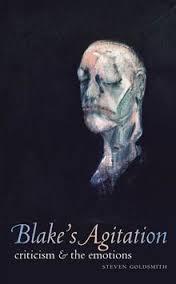 Recently, graduate student Joe Albernaz had the opportunity to talk with Professor Steven Goldsmith about his new book: Blake’s Agitation: Criticism and the Emotions. The resulting interview, which follows below, ranges across a wide array of subjects related to William Blake, from affect theory to the historicism of recent Blake studies to the characteristics of “enthusiastic” literary criticism.

Early in Blake’s Agitation, you refer to the book as a “sustained phenomenology of critical excitement.” What was it about William Blake’s life and work that made him such an apt figure through which to filter your concerns about the criticism of affect (e.g., affect theory), and, especially, the affect of criticism?

Blake’s work does not appeal to everyone, but for readers who find themselves drawn into its orbit it provokes an unusually passionate response.  I believe this stems from two sources: the sheer difficulty of his aesthetic experiments, which challenge the reader to interpret actively; and the breathtaking scope with which he critically engaged his world.  Blake strived to see the “fallen” modern world as a linked chain of ideological systems (religious, economic, political, familial, epistemological, etc.) that internally shape and constrain experience.  His work is characterized by the anxiety that comes from discovering the depth and complexity of these systems and by his conviction that thinking critically is the most effective form of pushing back against them.  I wanted to start with these “agitations”—which comprise the “phenomenology” of critical excitement—because they remain central to how we experience critical reading and thinking today.  Blake is eccentric in so many ways, but he is also representative of much progressive criticism after Romanticism, including the trends that have elevated affect theory into prominence over the last twenty years.

One of the central (and recurring) paradoxes of your book is the thought that criticism is “vigorous most, when most unactive deem’d” (to use the important Milton quote to which you draw attention). How important is it now to affirm the agency and importance of criticism in a time when humanities departments across the country are under intense scrutiny and even attacked for being “useless” and for failing to make “real change in the world”?

One early response to the book has been to see it as a defense of slow, patient reading against the charge that literature—and even worse, the study of literature—“makes nothing happen” (to quote Auden).  Every critic wants to believe that the work we pursue matters in the world, even when the evidence for its effects is tenuous and delayed at best.  But the inordinate emphasis on emotion in modern criticism is also a wishful response to what I call our “anxiety of inconsequence.”  Critical emotions attempt to bridge the gap between the dynamism we experience when reading and the absence of demonstrable impact outside that experience.  Put another way, emotion supplies us with evidence of agency—of thinking in action—when no other evidence seems to exist.  It is hard to tell whether affective evidence of this kind is reliable.  This was as true for Blake as it is for criticism today.  For that reason, my book toggles between investing in critical emotion and remaining skeptical toward it, without resolving the issue one way or the other.  If it is a defense of criticism at a time of “crisis in the humanities,” it also worries that such crises of confidence—perennial since Romanticism—have led humanists to exaggerate their agency and overstate their claim to significance.

While you acknowledge and discuss Blake’s passionate radical politics, you also warn against exaggerating his political involvement (as some critics have done).  Why do you think Blake for the most part distanced himself from direct political engagement, all the while remaining a radical his entire life – unlike, say, his contemporaries Wordsworth and Coleridge, who became conservative in old age?

This is a crucial question.  Blake’s vision is so consistently radical and his aesthetic practice so deviant that scholars have long found themselves pressed to explain his lack of direct political participation.  The problem is exacerbated by the fact that his revolutionary books had almost no audience or impact in his time.  Responding to this deficit, critics have taken a few isolated events (like his alleged participation in the Gordon Riots) and blown them up out of all proportion; or claimed that his religious enthusiasm prevented him from entering the more respectable circle of middle class reformers; or contended that he had a profound fear of censorship and even imprisonment; or argued that his politics were too radical for the emphasis on democratic individualism that dominated the period’s debates; and so on.  In my view, however, Blake’s apparent contradictions—fiercely radical inside his work, innocuous in his life outside—were not accidental but central to his practices as an artist and critical thinker.  Blake was a revolutionary spectator of the kind Kant first identified in the 1790s: deeply engaged in world events as accessed by the new media available to him (newspapers); enthusiastic for revolutionary principles; and unwilling to get involved directly in political action, in part because he found revolutionary violence appalling, in part because thinking passionately and critically about public events seemed like action enough.  In Blake we see a modern type still with us: the progressive intellectual who believes that critical thought rather than direct political action is the genuine (because uncompromised) engine of historical transformation.

The centerpiece of Blake’s Agitation might be the detailed reading of the short poem “On Anothers Sorrow” from Blake’s early work Songs of Innocence. What about this seemingly simple poem felt so central to your project?

The brilliance of “On Anothers Sorrow” lies in its dual nature: the poem mimes the period’s dominant attitudes toward sympathy so well that it can be read as a simple expression of those attitudes; but at the same time it builds into itself all kinds of frictions and resistances, creating little disturbances that rub against the conventional emotions.  This tension models Blake’s general tendency to inhabit his culture’s feelings while also contesting them from within; it demonstrates that critical emotions can disrupt our established ways of feeling and our usual ways of being human.  “On Anothers Sorrow” also played a crucial role in the development of Blake’s Agitation, serving as a pivot from the book’s first half to its second.  When I first began this project, I was more skeptical of the emotions in critical writing; I tended to view them as ways of compensating for the critic’s fear of ineffectiveness, especially in relation to politics.  “On Anothers Sorrow” helped me see that, despite his awareness of the deceptive or manipulative function of social emotions, Blake never dismissed emotion altogether or gave up on its critical potential. The dialectic of suspicion and affirmation represented by this small and seemingly simple poem remains characteristic of some critical approaches today, for instance, whenever affect theorists oppose the salutary disruptions of affect to the comfortable, identity-confirming routines of emotion.

You draw some fascinating comparisons between Blake and the politically and ethically minded later Derrida.  Do you think Blake shared Derrida’s messianic leanings and hopes for a “democracy to come”? Or does Blake emphasize self-overcoming and self-transformation in the here and now? Can we reconcile these tendencies?

Blake’s orientation toward an always future politics is entirely compatible with Derrida’s “democracy to come” and probably accounts for Derrida’s inclusion of a few pages on Blake in Politics of Friendship.  Somewhere Blake writes that democratic reformers are wrong to believe that we can achieve a utopian society (“paradise”) and live in it rather than just converse about that possibility.  Blake’s point, I think, is that a critical discourse on democracy always points us toward the future and prevents us from becoming satisfied with whatever compromised version of democracy we happen to inhabit.  The “democracy to come” is a perpetually revolutionary idea that by definition can never be realized completely.  For Blake, this idea does not seem to entail a choice between the “here and now” and the future: any moment in the present that deviates from the fallen world (even an event as slight as the “pulsation of an artery”) generates a messianic opening onto futurity.

The contradiction between “self-transformation” (or “self-annihilation,” as Blake called it) and collective transformation poses a more difficult challenge.  I don’t think we can answer the question of whether Blake was an “individualist” or a “collectivist”—or even a proto-socialist.  Those who emphasize the latter tend to ignore the bourgeois aspects in Blake; those who emphasize the former tend to minimize his most radical elements.  Blake, in fact, was both radical and bourgeois, exhibiting tensions that continue to resonate among progressive critics and still have not been resolved.

More than any other of the major Romantic poets, Blake holds a prominent place in today’s artistic and popular culture.  From various artists to choreographers and filmmakers, from the unofficial British national anthem “Jerusalem (Did those feet…)” to classic rock musicians like Jim Morrison and Bob Dylan to writers as diverse as Philip Pullman (His Dark Materials), Alan Moore (Watchmen), and Kenzaburo Oe, William Blake remains an inspiration. Just last week I bought an album of an obscure indie band on iTunes, only to find after the fact that one of the songs was titled “Satanic Mills” – a direct reference to Blake. What do you think accounts for the perennial appeal and influence of Blake in popular culture?

Blake once wrote that it’s a mistake to envision Time as a bearded old man when Time appears to his eye as an eternal naked youth.  That youthfulness alone (with all its loud, rebellious energies) is enough to guarantee Blake a receptive audience among musicians for generations to come—and to guarantee that those Romanticists who study Blake (rather than sober Wordsworth, say) will continue to fend off charges of immaturity.  Blake’s Agitation looks to Blake for a pre-history of our own critical culture and practices, but that is only one of his trajectories into the future, popular culture forming another altogether.  Given my own emphasis, I wanted to acknowledge Blake’s perennial appeal to progressive artists and thinkers while also striking a cautionary note.  Because of his working class and artisanal credentials, Blake seems to substantiate the idea that the intellectual is a hands-on laborer at work in the material world.  That’s a self-image that modern knowledge workers at their desks can find hard to resist.

You are in close dialogue throughout your book with some important recent studies on Blake, such as Saree Makdisi’s William Blake and the Impossible History of the 1790s. Any thoughts on where the study and appreciation of Blake is headed – or should be headed – in the next 10, 20 years?

I don’t think we’ll see any return to the mystical, occult, or purely visionary Blake of the kind that once led to a monumental study such as Kathleen Raine’s Blake and the Tradition (1968).  The historicist and politically inflected Blake is here to stay. However, I do expect to see a pendulum swing away from the recent historicist excesses (its neglect of text in favor of context especially) and back toward approaches that are more textually, theoretically, and philosophically engaged.  Blake’s aesthetic forms cannot easily be reduced to social allegory or historical example; they are too strange and resistant.  And as a lens onto theoretical problems that continue to engage us—problems of subjectivity, the emotions, materialism, collective life, the agency of art, and so on—his work remains an exceptionally powerful tool to think with.