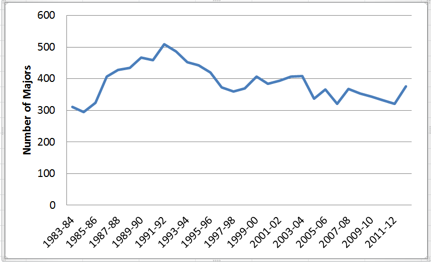 Professor Scott Saul’s New York Times op-ed (“The Humanities in Decline? Not at Most Schools”) actually began as a post written for our humble blog. Surprised by the many articles on the supposedly dismal state of affairs for humanities departments around the country, Saul wrote a piece in which he ran the national numbers against the statistics for Berkeley’s English Department. In its original form, Saul’s post put a greater emphasis on the statistical side of his argument and drew heavily on graphs, some of which were Berkeley-specific and generated especially for the audience of our blog.

When the New York Times expressed interest in Saul’s piece, the editors of the blog happily ceded our claim on it to the Times op-ed page. We now see the value in publishing what didn’t make it into the version published by the Times, and so are sharing Saul’s original post below.

A great deal of dust has been kicked up by the near-simultaneous release of two reports, from Harvard University and the American Academy of Arts and Sciences, worrying over the fragile state of the humanities on college campuses. At the Times alone, columnist David Brooks has speculated that the humanities “are committing suicide because many humanists have lost faith in their own enterprise,” and editorial board member Verlyn Klinkenborg has produced some frightening statistics to illustrate what he calls “the decline and fall of the English major”. At Yale, Klinkenborg notes, the number of graduating English majors fell from 165 in 1991 to 62 in 2012 (a 62% decline). At Pomona, his alma mater, the number of graduating English majors this year was a mere 16 out of 1,560 total students, or 1% of the graduating class.

I was struck by the statistics Klinkenborg offered because, as Director of Undergraduate Studies in UC-Berkeley’s English Department, I’ve wrestled with a quite different problem: how to accommodate the large numbers of UC-Berkeley undergraduates who, year after year, decide to declare the English major, then follow through with enthusiasm. Was Berkeley an outlier in a national trend, or were Yale and Pomona the outliers? Or was I self-deceived about the health of the English major at Berkeley? Or something else entirely? I turned to statistics for the beginning of an answer.

It cannot be denied that English departments across the nation have experienced wide fluctuations over the past 50 years. In the 1960s, English enrollments crested as never before. Often the rhetoric about “the decline of the humanities” uses the 1960s period as the benchmark for what constitutes success.

Here, for instance, is the graph on national humanities majors from Harvard’s recent report on the state of the humanities at the school (note the severity of its trendline):

There is a problem, however, with using 1960s enrollments as a humanities benchmark. As James English points out in his cogent The Global Future of English Studies, this boom in humanities majors correlates exactly with the arrival of women in massive numbers on college campuses. These women were expected to concentrate in a narrow range of majors, English being the most likely, as they were expected to move after college into a narrow range of careers (teaching especially). As more professions opened up to women in the 1970s, English enrollments experienced a rapid decline.

James English prefers to start his graphs from the period of the early-1980s, the point of settling after the 1960s boom.

From his own graphs, English concludes that the English major has actually been remarkably consistent over the past three decades — hovering between 3.5% and 4.5%, and competing surprisingly well with fields such as History and Economics. Widening his view, he writes, “English is one of the larger and more durable disciplines in a growing global system. Let’s stop writing its obituary and start charting its future.”

Berkeley’s English Department has largely conformed to these national trends, with a bit of happy local variance. If one looks at its enrollment numbers since the 1950s, the graph has a poignancy to it, since it seems we’ve drifted so far now from our 1970-era peak:

Yet if one focuses on the number of graduating seniors for the last thirty years, the overall picture is different:

While the number of our majors has generally risen and fallen with national trends, it appears that we are more robust than the average English department. In the mid-to-late-‘80s, when Berkeley’s English Department was incubating the literary-critical movement now known as the New Historicism, our major truly boomed — increasing by two-thirds over less than a decade, up to 501 at our peak in 1992. And though we have fallen from that peak, we haven’t fallen hard.

This year (2012-13) the Berkeley English Department had 376 graduating seniors — a 25% decline from 1992, but still an estimable number. Our 376 graduating seniors comprise a full 5% of the total UC-Berkeley 2012-13 graduating class. In 2012, our number of majors put us at a respectable distance from the most popular social-science majors — only 15% less than Psychology, and only 30% less than Economics and Political Science.

The Case of Yale, Outlier No More

What, then, of those terrifying numbers that Klinkenborg throws out for Yale English?

A Private vs. Public Divide?

Given that the trendlines at Yale are so different from the trendlines at Berkeley, we might ask: what are the likes of Verlyn Klinkenborg and David Brooks really lamenting? The decline of the humanities across the nation, or the decline of the humanities at the most elite private institutions? Here, one might note that the faculty behind the American Academy report (which, to be fair, is hardly as alarmist as Klinkenborg’s op-ed) hail overwhelmingly from elite private universities. Of the twenty-odd faculty on the commission, only four come from public universities, and they are all administrators — two former chancellors of UC-Berkeley, the chancellor from the University of Texas system, and the president of Miami Dade College.

It is my sense, through reports coming from schools like Stanford and Cornell, that the enrollment decline in the humanities at many of these elite institutions is real, and concerning. Still, these schools educate a small and economically privileged fraction of the Americans attending college at any one time. The number of Berkeley students who qualify for government-sponsored Pell grants is roughly the same as the number of Pell grantees for the whole Ivy League combined. We should not conflate the state of the humanities in America with the state of the humanities at these schools, though of course the two may be interrelated.

It would be very interesting to hear how the English major is faring at large state schools like Michigan, UT-Austin, Illinois at Champaign-Urbana, Ohio State, Penn State, and Wisconsin. They appear to have been singularly underrepresented in this conversation.

At Berkeley, it seems that the English major is more than holding its own. This is borne out not just in the statistical record, but also in the signs, large and small, of our students’ intellectual commitment — in their high participation in the Chernin Mentoring Program, a complement to the major that enrolls over two-hundred students per term; in the writing workshops they self-organize; in the archival research they perform for their honors theses; and, especially, in the intensity of mind that they bring to lectures and seminar discussions. Somehow, our undergraduates come into our classrooms believing that ideas do matter. Let’s hope that, in this regard, Berkeley remains the bellweather it has often been — and that the elite private universities rebound their way to a better equilibrium.