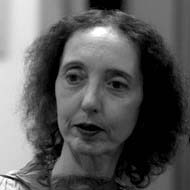 Joyce Carol Oates really needs no introduction. She is the author of over 40 novels, numerous plays and novellas, and many volumes of poetry, nonfiction, and short stories. She has received numerous awards, including the National Book Award, two O. Henry Awards, the PEN/Malamud Award, and the National Humanities Medal. Her work has been nominated for the Pulitzer Prize three times. In short, she is one of the most important authors of the last 50 years.

In 2012-13, the English Department hosted Oates, whose usual home is Princeton, as a visiting professor. While here, she taught a creative writing workshop on “short fiction” to a very lucky group of undergraduates.

Our own Donald McQuade recently had the opportunity to interview Oates about her experience teaching and writing at Berkeley. What follows is the text of this interview.

Given your experience teaching writing at Princeton, a private university, what differences, if any, did you notice in working with students here at UC Berkeley, a public university?

Truly, I don’t think that there is much difference. Individually, my UC Berkeley students might well have been Princeton students in terms of writing ability, general intelligence and enthusiasm and industry.  Many of my UC Berkeley students were very well-prepared by having taken courses in the English Department that seemed to be related to Creative Writing—courses that don’t exist at Princeton. Perhaps I was most surprised, and impressed, by the very high quality of the UC Berkeley students’ critical writing—analysis, assessment, insight. There were several students whose written critiques of stories I’d assigned were absolutely brilliant—I would read them to my husband. (Our anthology was The Oxford Book of American Short Stories, which encompasses a wide, historical range of short fiction from Washington Irving to Junot Diaz. Each week, I would assign students to read one “old” story and one “newer” story and make comparisons. Responses were virtually always very interesting and occasionally astonishingly good.)

Overall, the main difference was that, at Berkeley, I think I had 17 students in the course—a large group and so likely to be more lively than our smaller workshops at Princeton, which has a ceiling of 10 and is sometimes lower for one reason or another. One has the impression that, at Berkeley, a “sprawling” public school, individual students must “put themselves forward”—as it is said—in a way that Princeton students generally do not.

At Berkeley, I had a few “older” students who had transferred from junior colleges—or rather, community colleges—an unknown here [at Princeton]. One of my undergraduates was married and a mother—absolutely unknown here.

The racial/ethnic mix is virtually ideal—proportion of male to female students—but this is perhaps partly because I chose the students myself from 200 applications.

Over the course of your many years as a distinguished teacher of writing, what changes have you noticed in the discipline, in the students you work with, and, more generally, in the cultural environment on campuses such as UC Berkeley and Princeton?

Since my experience with writing students is so selective, it seems that I am always working with students of a similar type—they are self-selected, in fact. There is more interest in “making films” now—obviously. And I encourage students to “publish” online if they can, to assure some sort of audience.

How do you balance the pressures of teaching and maintaining the pace of progress on your own writing?

Writing is a matter of intense concentration, and stirs feelings of anxiety, frustration, exasperation, futility—teaching is quite the opposite. The two experiences are contrary, or rather complementary.

You have dedicated much of your professional time to teaching writing effectively, and from all accounts, you have earned the abiding gratitude and admiration of your students. In this respect, would you kindly tell us what there is about teaching that enriches your life as a writer?

In the most immediate way, my life as a writer is “enriched” by the close textual attention we spend on fiction in the workshop. When you have scrutinized the prose of Stephen Crane, Hemingway, Paul Bowles, et al. as with a magnifying glass in the company of sharp-eyed young writers, it is very, very helpful in ways difficult to explain, when you come to your own writing. The students’ writing is rather different in that my tendency is to search for things that are done well and seem original and successful, and to highlight these.

In what specific ways, if any, did your visit here have any appreciable impact on the content and/or progress of that writing project?

At Berkeley, at my desk on Panoramic Hill overlooking much of Berkeley and in the distance the Bay, I spent a good deal of time concluding a novel begun in Princeton, and had some time to work on a play, plus at least one story set in Wild Cat Canyon (“Mastiff,” which appeared in the New Yorker a month or so ago, and which several of my Berkeley students wrote to me about, recognizing the setting) and perhaps others.

In what ways, if any, did the immediate context and circumstances of Berkeley have an impact on your writing more generally?

It is too late in my career for any more “impacts” on my writing generally…. It might be said that whatever was going to “impact,” has done so.

In an interview with The New Yorker, you described yourself as having no personality when alone. To what extent—and in what specific way(s)—do you find this condition necessary in order to absorb information from the world and to craft it into fiction?

Really, I have no idea. We all have different personalities. Nabokov cast his shadow wherever he looked—Keats may have done so also, but it is less evident.

You have been quoted as saying that you “can basically write almost all day long, with interruptions.” What are the kinds of interruptions you most welcome in your writing day?

This varies. Artists are always thinking about their present project…. There is the Work, and Life is the interruption.