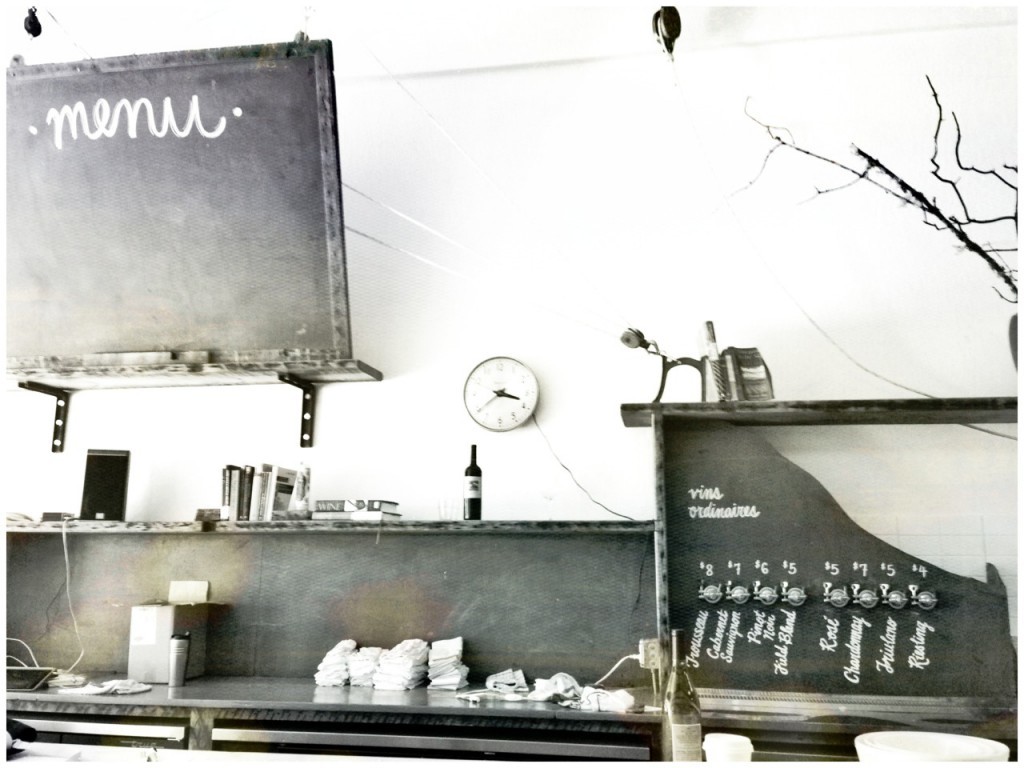 Bradford Taylor, a graduate student in the department, recently opened a wine shop and bar in Oakland called Ordinaire. To celebrate the occasion, we asked Bradford to write a piece for us about his interest in wine and the experience of opening the shop. What follows is his delightful meditation on topics ranging from taste to academia to small business ownership to (of course) oenology. We recommend you not only read what he has to say, but that you also visit him at his shop!

Wine can bring the worst out of literary critics, myself included.

I don’t mean the sort of stuff chronicled by Lodge and Amis; and I don’t mean the post-lecture denunciations that circulate in the lounge when the $3.99 Blue Fin Pinot Noir1 is running low. On the contrary, this is when wine is doing its job: fostering intellectual debate, forging liaisons between Medievalists and Modernists, convincing advanced graduate students they are more qualified than so-and-so visiting professor, and so forth. In these moments, we glimpse the shadowy outlines of the golden age of literary studies, when graduate school consisted of soirées dotting the Berkeley hills; when advisors routinely invited their pupils to explore the Claret collection they obtained (cheaply at auction) while doing undergraduate work at Oxford; when professors emeritus dropped in on job-talk receptions, smelling of cognac, bantering with each other in stichomythic blank verse; and when junior faculty fueled their research on Gimlets and Pall Malls, rather than Adderall and Diet Pepsi.

The “worst” that I am talking about is, rather, the hackneyed analogy between literature and wine: Wine is like great literature. The implication is that wine can move us just like Hamlet and “Crossing the Bar.” Less romantic, more accepted forms of literary study have variations on the analogy. Marxism might see a link between the shared conditions of appreciation; post-structuralism might analyze the vinous “text,” tracing words like “body,” “finish” and “les racines” in and out of literary and oenological contexts; cognitive science might show how wine and literature trigger similar mnemonic processes. You get the point. When literary criticism and wine are deliberately mixed, the latter is inevitably diluted. It ceases to be something we drink with dinner (or swill after (before?) a conference paper) and becomes something we sublimate into the airy cloisters of literary discourse.

I am guilty of this. My dissertation is about taste and literary Modernism, so I think about food and wine all the time—not only about what I am going to eat and how I am going to prepare it, but about what it “means.” The ideology of a red wine reduction? Deglaze. Whoever concretely enjoys artworks is a philistine; he is convicted by expressions like “a feast for the ears.” Thicken. Aura is the uniform sauce that the culture industry pours over the whole if its manufacture. Whisk in a pad of butter and test texture with pinky. That avaricious Philistinism always wants to touch it and taste it. Pour over rare sirloin. Art expunges from nature the rawness of what is unmediated by spirit. It sounds ridiculous, but even now, sipping overly alcoholic Côtes-du-Rhone watered down with a cube of ice, my mind jumps between the interwar discourse of temperance, the fetishization of the “blushful Hippocrene” from the “warm South,”2 and the recent trend in California to make wines of “restraint” and “balance.” How do these things fit together? Does it matter?

After passing my qualifying exams a couple years ago, I decided to open a wine shop in Oakland. Simply reading and writing about taste for nine months straight had me fearing impending irrelevance. I was also feeling hypocritical. If taste is so important to everyday life (an underlying assumption in my work) then why am I holing up in Townsend Center working groups and skewing the work of Merleau-Ponty into a complicated analogy for boeuf en daube? I should be “out there,” encouraging people to actually taste, not dissecting the protocols of this sensuous activity until it completely disappears. I found a spot near Lake Merritt, signed a lease, and drew up plans for a real aesthetic education.

Needless to say, I had no idea what I was getting into. An extensive (and expensive) zoning process that included two major conditional use permits and a variance, months of back-and-forth with the health department, a trademark lawsuit (see below), F.B.I. background checks, a state bureaucrat who goes on a two-week holiday the day before he is supposed to issue my liquor license. Not to mention the build-out. I learned how to seal a concrete floor, skip-plane reclaimed fir joists, install a wood floor, reinforce a stud, dig out impossibly deep splinters, biscuit join a table, apply a wax finish to steel, rig a block-and-tackle system to achieve mechanical advantage,3 restore a nineteenth-century chandelier, calculate water-heater capacity, glaze a window, use a chamfer bit, and install a fixed air gap. I joke with my friends that, if the shop falls through and the MLA interviewer is unimpressed with the expansive extra-curricular section in my CV, I can always turn to food code consultant or general contractor as a backup career.

But now I am finally opening, and it’s time to dig up the buried and bruised idealism that inspired this project. The shop is called The Red Whale—a not so vague allusion to Moby Dick. Like Melville’s whale, wine can inspire a life-long quest for a greater meaning, even though at the end of the day wine is just an easily understood result of farming and fermentation. This is the paradox of wine: both easy and impossible to comprehend.4 I knew for sure that I had to avoid names like “Cork” and “Sip” in favor of something only quasi-referential. Wine and wine culture can be nauseating because it tends to only refer back to itself, as if the only reason to drink wine is to be able to talk about drinking wine. I want my shop to be a place where people buy and drink wine as a pretext for living more fully. Of course, being an academic means that education is integral to life, so I also will host tastings, encourage customers to understand where their wine is coming from, and insist on the cultural and aesthetic benefits of honing one’s palate. Great name, right?

Enter trademark lawsuit (see above): Leader/visionary of Red Whale Coffee has his attorney send me a Cease and Decease letter a week before opening. I could fight and win for a cool xx-thousand, but I decide to change the name: no energy or money for this sort of thing. The new name (born out of a collective unconscious and a few hectic hours of easel-board brain storming) is ORDINAIRE. It refers to vin ordinarie, or “everyday wine,” which is wine that never makes it into a bottle, but is kept back for the winemaker, close friends, and the local bistro. This is the point of my shop: using wine to transform our concept of the ordinary–to transform our concept of the possibility of the ordinary. L’ordinaire est possible! If that wasn’t the title of an avant-garde manifesto, it should have been.

We will focus on wines from California, made by small winemakers with high standards. Wine is an agricultural product, and the environmental and economic benefits of buying local—from farmers and producers who care about the long term effects of vineyard practices and chemical additives—applies when you are browsing the liquor aisle at Safeway. Of course, a wine shelf is dramatically different than a produce aisle. You can smell and taste an apple with minimal investment, whereas the mystery of a dark Cabernet with a flashy label, sandwiched between two other equally flashy labels, poses certain issues. How do I know it’s good? Will the purported “cassis, pencil lead and clove” pair with my pot roast? Is it worth $16? Why is that one up there $23? Should I just get the same damn bottle I get every week? These are questions that can only be answered in the past tense. And trying to answer them definitively tends to hamper enjoyment.

Indeed, judging wine at all is a tricky process. Even the most qualified wine critics frequently get things wrong.5 Which is why assigning something as definitive as points is an absurd endeavor—akin to ranking literary works on a scale of 1-100. It’s even more ridiculous to buy and drink accordingly. The big, heady works will always beat out the less ambitious; but one can only read Ulysses so many times, and sometimes Waugh is just the thing. This isn’t meant as a dispensation for mass-produced plonk. Wine can be unpretentious without being shitty, and we plan to carry a lot of wines exactly like this, to be enjoyed with your Wednesday night tuna melt or stir-fry.

Getting to know the owner of a small wine shop is one of the easiest and most pleasurable ways to solve the problem of choosing a wine. You will no longer have to fall back on that house Zinfandel time and again, nor will you have to waste time scanning chat rooms for tasting notes and 90+ scores before heading to the grocery store. Leave all this to your wine merchant, who carefully curates a modest stock of about 100 wines from California and Europe. Stop in at 3354 Grand Avenue and introduce yourself. Say you’re from Berkeley. Tell me what you specialize in and what classes you are teaching this semester. Let me know what kind of wines you typically like. I’ll probably recommend something that I am sure will please you, alongside a bottle of something a bit more eclectic. Go home and drink with friends. Avoid dissecting the poor thing in search of individual flavors (Wordsworth’s maxim holds); instead, ask yourself and others if it was good. Perhaps it was intriguing or inexplicably different from what you expected. Come back to the shop and tell me what you thought, and we’ll go from there.

While you’re at it, why not have a glass wine? Ordinaire will also be a bar, with cheese plates and charcuterie. I would be thrilled to have visitors from Berkeley bellying up to our marble bar. We also have an amazing mezzanine with a hardwood floor6 and a massive table designed with the most ambitious working group or seminar party in mind.

1. A subsidiary of Bronco Wine Company, the corporation behind Charles Shaw, Franzia, and the general exploitation of undiscerning palates and California’s vulnerable labor force.

2. Today, the only wine with “beading bubbles” coming out of the “warm South” of France is technically flawed. But back before fermentation of still wines was halted with sulfur to prevent further fermentation in bottle, still wines would develop a small amount of pétillant naturel, a style that is once again growing in popularity amongst natural wine enthusiasts. I am more than happy to recommend a few bottles of deliciously light-bodied, low-alcohol pétillant for your next Keats seminar.

3. A largely unsuccessful project still in need of a modern mariner.

4. However, there is nothing behind the red veil; and it’s best to understand this right away.

5. Click here to read one of the more recent articles on this topic. I wonder: Why not make a reflective rather than determinate judgment when tasting wine?

6. Laid by yours truly, my wife Nicole Betenia, Alek Jeziorek, and Jonathan Larner-Lewis. While I’m at it, I should also mention my enormous debt to Alex Dumont and her partner Terry LaFrazia, who helped with everything from scraping off toxic carpet adhesive to grouting tile. Christopher Miller helped take down precariously high light fixtures. Wendy Xin painted the sign. This has truly been a departmental endeavor!