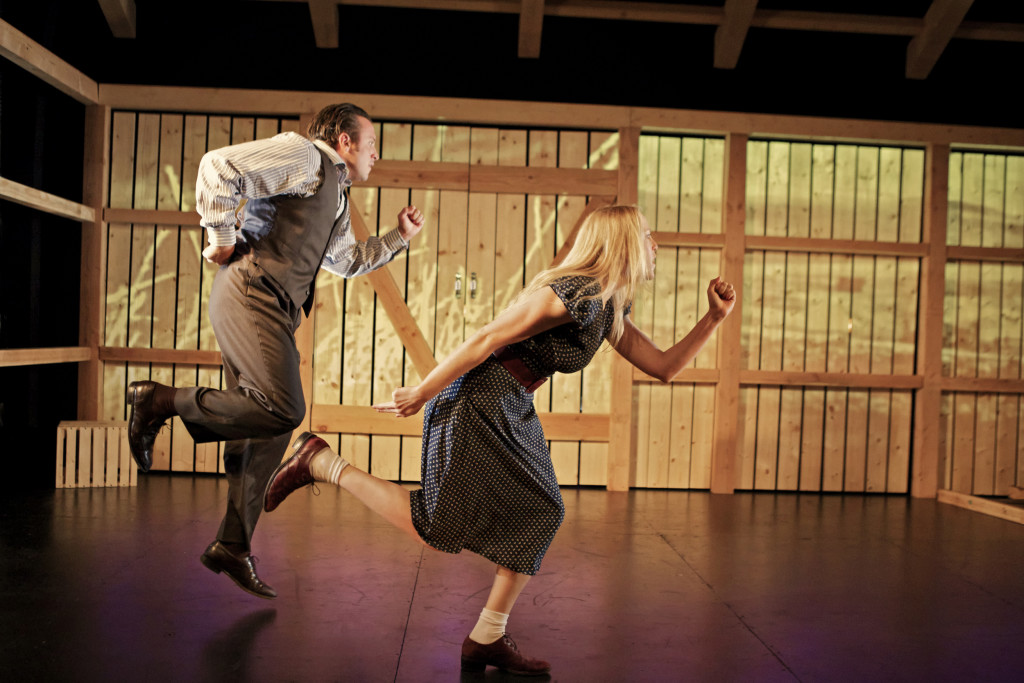 The first piece in the series is a review by Alek Jeziorek of the Shotgun Players’ performance of Bonnie & Clyde. The show runs at The Shotgun Players’ Ashby Stage (1901 Ashby Avenue Berkeley, CA 94703) until September 29. Tickets are $20-35. Call or visit their website for more information. (510)841-6500. www.shotgunplayers.org.

Adam Peck’s Bonnie & Clyde, directed by Mark Jackson for the Shotgun Players, is no retread of Arthur Penn’s justly famous 1967 film. Reshaping the myth of the infamous outlaws and compressing their story into a hypnotic two-actor drama, it speculates instead about the personal and everyday myth that Bonnie (Megan Trout) and Clyde (Joe Estlack) might make for themselves. The play pares their story down to a pith of juvenile fantasy, adolescent love, and repressed fear. Peck’s Bonnie and Clyde know they will die, and die soon. On a bare stage, they desperately hold onto every mortal detail of their life together, developing a nuanced personal chemistry that is both frustrated and tested by the couple’s hard living.

Jackson presents Bonnie and Clyde’s rebellion—against the law, against Depression-era poverty, against the media’s sensationalization of their rap sheet—as the work of children at the end of their run, hiding out in a barn turned dollhouse. They jump hopscotch with a handgun, while devising fantastical scenarios of “What would you rather be…?” They bicker childishly and jealously over past lovers, tattoos, and Bonnie’s recently departed pet mouse. Clyde touches Bonnie as awkwardly as an inexperienced and fearful teenager. Bonnie points a gun at Clyde and pulls the trigger. They play dress-up and pretend to get married. They fight about who will lie alongside whom in their burial plots. For all their celebrity outlawing, their pockets seem empty and their prospects bleak.

Trout and Estlack, under the direction of Jackson, perform Bonnie and Clyde as a short-lived but ultimately tender accumulation of habits and lovers’ idioms. Their manner of eating beans reflects the gestures they left behind as waitress and laborer: Bonnie deftly but mechanically spears and deposits one bean at a time into her mouth; Clyde carelessly arranges piles and shovels them into his gullet.

The set—knotty pine boards constructed into a loosely built barn designed by Robert Broadfoot—provides the blank canvas for Jon Tracy’s brooding yet whimsical lightscape, which interrupts the present action, signals the interludes that draw the audience into Bonnie and Clyde’s psyches, and comments on the play’s development with a Bacchic energy reminiscent of Greek chorus. Bonnie instructs Clyde that he should appreciate what she sees, how she sees: in her eyes she’s “got things going on in there you should take a look at.” In these interludes, the stage seems to transform into a literal space inside either Bonnie or Clyde’s head, which the audience views by looking into their gaze. Bonnie climbs the rafters and hugs them pleadingly in a tortured address to her mother. She fantasizes about the life she might have led as a Broadway star and performs the sort of vaudeville routine that might have got her to the Great White Way. And Clyde narrates the scene of their death fragment after fragment, while Bonnie slowly contorts under the fire of Tommy guns.

Perhaps coincidentally, the knots in the wood mimic, in the gray light, the bullet holes of Bonnie and Clyde’s last getaway car. The space between the boards suggests the awareness of some oblivion, some freedom beyond the overdetermined finale of Bonnie and Clyde’s story. And it provides the most private moment of the play, when, through the gaps of the barn, we see Bonnie and Clyde dance—when they almost escape the audience and are at last alone together, mostly hidden from our view and the law’s. These scenes, shaped by Jackson, Trout, Estlack, and choreographer Kimberly Dooley, interrupt the psychological drama of the play but make for its coalescent and innovative force.