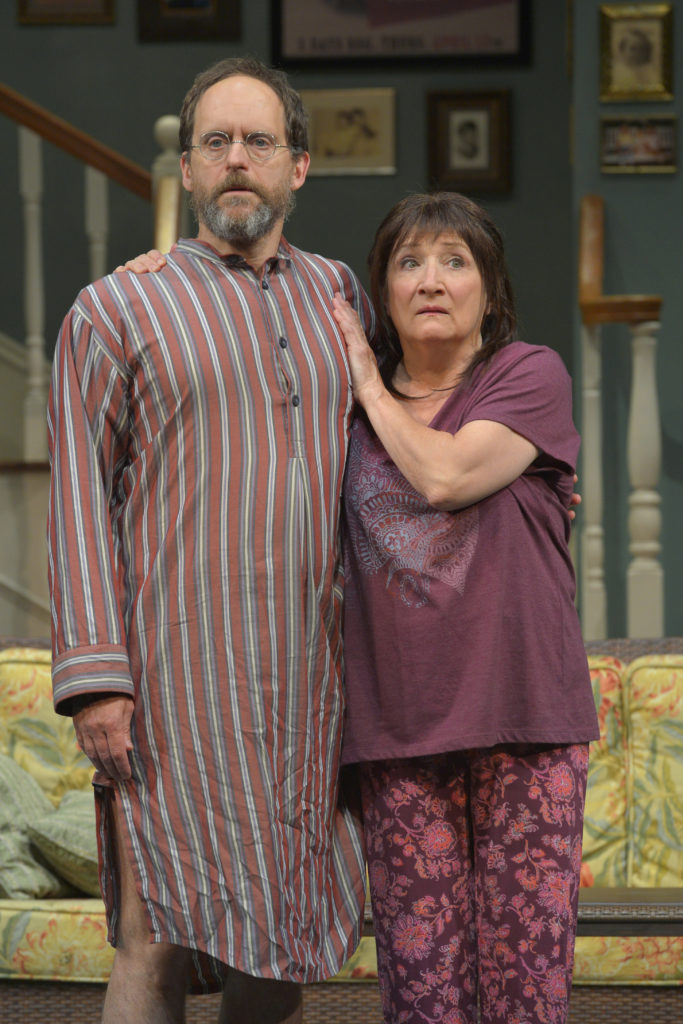 The second piece in the series is a review by Jonathan Shelley of the Berkeley Rep’s production of Vanya and Sonia and Masha and Spike, which won the 2013 Tony Award for Best Play. The show runs at the Berkeley Repertory Theatre until October 20. For ticket info call (510) 647-2949 or visit berkeleyrep.org.

Vanya and Sonia and Masha and Spike, Christopher Durang’s Tony Award-winning play now at the Berkeley Repertory Theatre, is an interesting mix. The title refers to a brother and two sisters named after Chekhov plays—that’s what you get when your parents were “college professors who dabbled in community theater”—and a boyfriend who it is safe to say has probably never read a word of Chekhov in his life. Durang’s play caters to both these types: fans of Chekhov will be tickled by the abundant nods to the Russian playwright but knowledge of Chekhov is by no means a requisite for enjoying this play. In this sense, Durang pulls off an impressive coup, translating the high literary themes of Chekhov into the mode of a sitcom—as if to prove that a lot of Chekhov easily could and should be material for a sitcom.

Vanya (Anthony Fusco) and adopted sister Sonia (Sharon Lockwood), chronic homebodies after having cared for their ailing parents, dwell in middle-aged arrested development in their bucolic Pennsylvania home. Life is routine save for the prophetic exclamations from their black housekeeper Cassandra (Heather Alicia Simms) and occasional visits from their sister Masha (Lorri Holt), a Manhattan dwelling star of stage and screen who paid for the parent’s care and now pays for the house thanks to the fifth sequel of the film franchise Sexy Killer. She stops by on the way to a nearby costume party, her much younger and frequently bare-chested boy-toy Spike (Mark Junek) in tow. She reveals that she intends to sell the house, arguments ensue, and Masha seems like she has the upper hand until Spike befriends Nina (Caroline Kaplan), the bubbly young ingénue next door.

Vanya, Sonia, and Masha butt heads for almost every reason that siblings usually do, but the potentially heavy moments are lightened thanks to Richard E.T. White’s nimble direction. Kent Dorsey’s set with its plethora of family portraits mounted on the walls and tables serves as a reminder of the history that plagues this family, but everyone literally and figuratively dances around these burdens. Vanya and Sonia’s irritation with each other surfaces only to be dissolved seconds later, when their genuine caring shines through. Spike, when not doing impromptu yoga or faux-parkour on the furniture, tackles Masha in writhing make-out sessions, with both Unek and Holt turning in remarkably physical performances. A brief choreographed scene change in which Spike and Cassandra rearrange the furniture to music speaks to a larger rhythm in the play: the performers are often hopped-up, restless in their drive to put things aright.

This energy is also sustained by a script which treats its literary references—Greek tragedy, Shakespeare, fairy tale, pop music, and television—with a breezy nonchalance. Nonetheless Durang manages, with help from White’s staging, to inject the script with some serious conceptual features. The power of theatricality is frequently evoked: over half of the characters are professional or aspiring thespians; there is a play-within-a-play; and every character is forced to don a costume at some point. It is in these moments that the characters seem to truly find themselves, as Sonia’s blinding sequined gown unleashes a show-stealing Maggie Smith impression from Lockwood.

But these more intriguing explorations of theater’s possibilities are overshadowed by the script’s overbearing politics, and it is in the second act that the play indulges some of its worst impulses. For all its sympathies to the likes of the aging Vanya, Sonia, and Masha, Durang’s script has a mean streak towards its young and non-white characters. Vanya and Sonia do little more than make Cassandra clean up their coffee strewn across the walls, and Masha assigns her the job of making lunch despite Cassandra’s reminder that she’s “not a cook.” Cassandra’s performance of a voodoo ritual in an attempt to prevent the house from being sold is both baffling (why would she care about the house’s ownership?) and cringe-worthy.

Meanwhile Vanya and Sonia get to realize their dreams. When Sonia finally gets “to live” and is asked out by a man she met the night before, it’s touching due in large to Lockwood’s moving sensitivity. Vanya too, thanks to Nina’s doting, musters the courage to share his never-revealed play with everyone, but he descends into a vitriolic harangue when interrupted by Spike’s texting. It is an off-putting moment in a largely charming play, and while Fusco admirably commits himself to Vanya’s misanthropy, the speech itself is an oppressive and tiresome onslaught of banal and ageist topical gripes: kids and their gadgets, the frivolity of multi-tasking, all lower-case text messaging, self-adhesive postage stamps (they were apparently better when you had to lick them), the show Entourage, Lindsay Lohan, the rudeness of young people, the fact that no one knows who Señor Wences is anymore, and the list goes on. Any serious complaint—such as Vanya’s lament about Disney’s unceremonious dismissal of Tommy Kirk from the Mickey Mouse Club upon learning that he is gay—is shrouded by so many trivial and hypocritical grievances that it’s no surprise why Vanya is so alone. It’s an unfortunate scene that caters to the play’s prejudice and makes Spike’s shameful millennial-narcissism almost inspiring.

At its comedic core, Vanya and Sonia and Masha and Spike shows three bickering siblings becoming comfortable with themselves and each other. But such a resolution feels more like a surrender than a maturation. Durang’s characters still seem bitter in the end, and rather than achieving genuine reconciliation, they just seem tired of hating each other after two hours. As in a sitcom, Vanya, Sonia, and Masha seem poised for another episode of sibling rivalry. That would be worth tuning into with Berkeley Rep at the helm, but the same cast is also capable of executing far more nuanced and thoughtful comedic material.

Vanya and Sonia and Masha and Spike runs at the Berkeley Repertory Theatre until October 20. For ticket info call (510) 647-2949 or visit berkeleyrep.org.