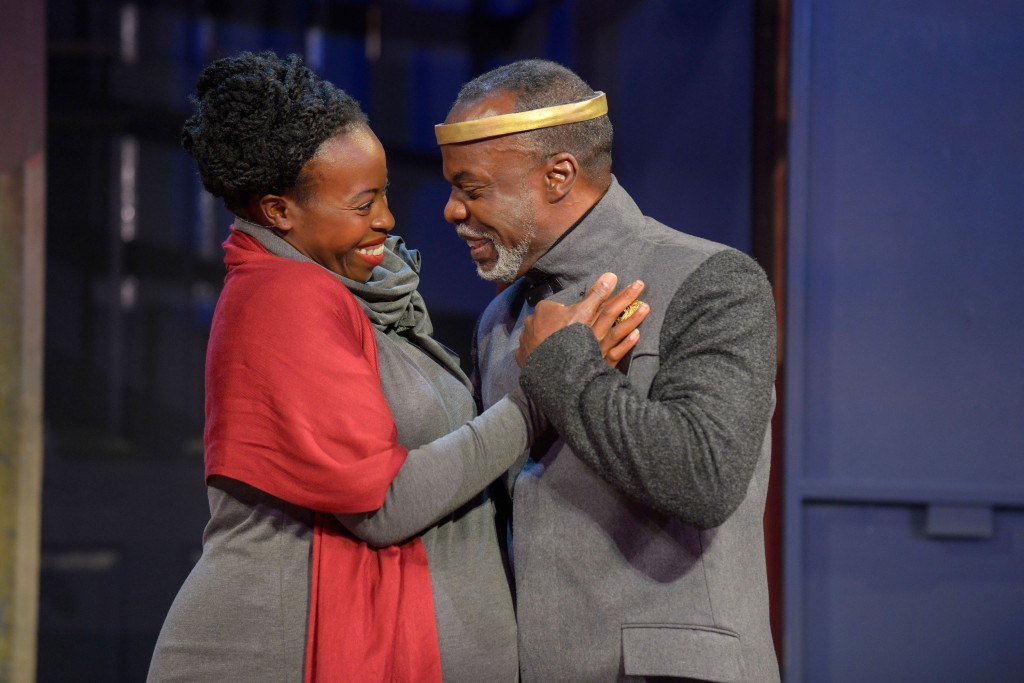 The third piece in the series is a review by CFS. Creasy of CalShakes’s production of A Winter’s Tale, directed by Patricia McGregor. The show runs at The Bruns Amphitheater at 100 California Shakespeare Theater Way (formerly 100 Gateway Blvd.), Orinda, CA 94563, until October 20. Call the box office or visit their website for more information: www.calshakes.org / (510) 548.9666.

Much depends on “the favour of the climate.” And it seems that Northern California is favored indeed since it can afford, in late September, a comfortable outdoor evening performance of a Shakespearean play so un-English in much of its weather. In keeping with the mildness of the climate is the irrepressible gaiety to be found in the California Shakespeare Theater’s current production of A Winter’s Tale. This late ‘problem play’ offers, along with the usual question of how to navigate its tonal and generic ambivalences, two of the most famous staging difficulties in Shakespeare—the bear that chases Antigonus offstage, and the miracle of the statue. Directed by Patricia McGregor, this Cal Shakes production manages to obviate those difficulties almost entirely, and in an unexpected and inventive manner.

Cal Shakes productions done in collaboration with the Triangle Lab always emphasize forms of overt audience engagement in their shows, and though one can only imagine how successful this may be with other dramas, it works to surprising advantage with A Winter’s Tale. Much of the mise en scène directly involves the audience in one way or another, as do some powerful moments in individual performances. (All of the performances are quite strong, but L. Peter Callender’s double duty as Leontes and the Shepherd, and Margo Hall’s as Paulina and the Clown are particularly rich.) For instance, Leontes addresses his first asides and soliloquy with more than an eye toward the audience, commenting on the spectacle of Polixenes and Hermione (“O, that is entertainment / My bosom likes not, nor my brows”) in a manner so nearly conspiratorial that the audience feels as much in collusion with him as, he suddenly suspects, Hermione is with Polixenes. It calls to my mind Vladimir’s and Estragon’s commentaries on their evening’s entertainment (“c’est terrible” / “on se croirait au spectacle”), though it bears an entirely different implication. More overtly, the production has Christopher Michael Rivera’s Autolycus break character, perform a ‘magic trick’ with an audience member ‘proving’ the reality of miracles, and then lead the audience in a chorus of his song from the end of Act 4, scene 3, to allow for a scenery change occurring before our eyes. Paulina enjoins the audience to join in the music made to awaken Hermione; and so on.

Amid these, though, perhaps the most interesting moment of the performance enfolding the audience comes when, at that strange turning point in the play, the actors ask for a volunteer to come onstage to perform the role of Time. With this move, the production makes the spectators’ “dreams” as much our “actions” as its own, and it captures one of the strengths of the production. Rather than directly confronting potentially irresolvable questions the play poses about the relations between art and nature, between faith and illusion (dramatic or otherwise), and ultimately about the possibility of grace and miracles, McGregor’s production so implicates the spectator in the performance that questions of belief, verisimilitude, and the like are largely side-stepped with a deft agility (the lack of which Antigonus must certainly lament as the bear follows him offstage). Thus, though the staging of the bear and the famous closing scene of the play may not be, in and of themselves, particularly innovative resolutions of the underlying dramatic question, by the time they arrive we seem to have been cured of the perspective from which they would constitute difficulties for dramatic presentation.

The production is presented overwhelmingly in a major key, espousing an interpretation of A Winter’s Tale as ultimately a comedy of regeneration, redemption, and grace. And this is reinforced by the lighthearted, wilful anachronisms—Autolycus played as a sort of George Michael lookalike musician; the bear’s appearance being heralded by a few bars of funk, and its breaking into dance before following its prey. This playfulness converges with the overall emphasis in the pastoral-tinged second half of the play on winking drollery and mirth; the more tragic first half is played with an undertone of wry, self-aware bathos. (I found myself laughing at Leontes’s threats to stomp his newborn daughter to death—but this may be more revelatory of my character than of the play.)

I began by saying that the clemency of the Bay Area’s climate fits nicely the fundamentally jubilant root note of Cal Shakes’s A Winter’s Tale. It is perhaps a bit much to align the natural setting wherein the Bruns Amphitheater sits with the production’s embrace of the rejuvenating, festive Bohemian spring and the comic side of the Tale’s conclusion. But one cannot help noticing that the production passed over Act 5, scene 2—so replete with commentaries on and images of “joy waded in tears” and the struggle “’twixt joy” and “loss”—with a jaunty half-sung, half-rapped musical summarization, so as to speed on to the final scene and luxuriate in the miraculous “blossoms” of the protagonists’ “fortune.” Mamillius famously tells his mother that “a sad tale’s best for winter,” and, at Cal Shakes, that sadness is indeed transubstantiated into the joy of the telling. The wonder this performance posits is in the words the audience sang, to itself, along with Autolycus (or was it Christopher Michael Rivera, or is this even a question that the performance allows us to ask?)—in this telling of A Winter’s Tale, “A merry heart goes all the day, / Your sad tires in a mile-a.”