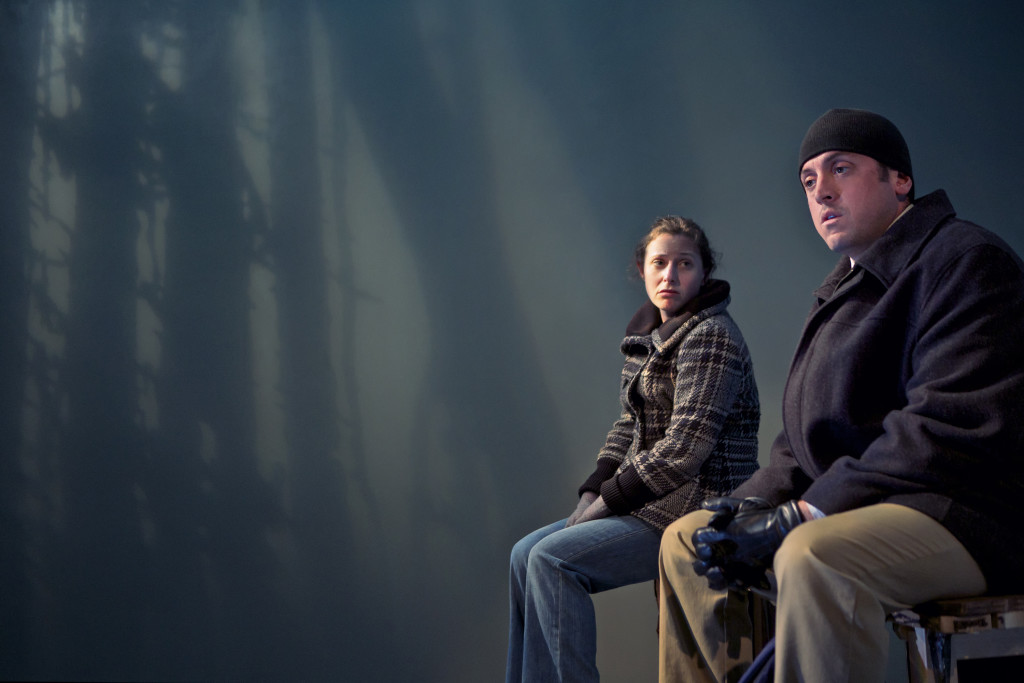 The fourth piece in the series is a review by Alek Jeziorek of Shotgun Players’ production of Strangers, Babies, directed by Jon Tracy. The show runs at The Shotgun Players’ Ashby Stage (1901 Ashby Avenue Berkeley, CA 94703) until November 17. Tickets are $20-35. Call or visit their website for more information. (510)841-6500. www.shotgunplayers.org.

Linda McLean’s Strangers, Babies, directed by Jon Tracy for the Shotgun Players, opens with May (Danielle Levin) fixedly peering off a corner of the square stage at an injured bird on the balcony of her apartment. She seems anxious to help, citing that “injured things can survive,” but, peculiarly, she seems reluctant to intervene—obsessive yet distant. Her husband, Dan (Cole Alexander Smith), looks on knowingly and patronizingly. He tries to convince her that hanging a bird feeder on their balcony, although caring, entices more birds to fly into the glass of their sliding door, leading to more “wounded birds” to look after. After all, converting the balcony into a bird sanctuary prevents him from using the balcony to fulfill his banal Sunday dreaming: drinking fresh coffee and reading the newspaper in the morning air. The scene is paradigmatic of the play’s atmosphere, equal measures of veiled violence, improper care and everyday life.

A disturbing event in May’s distant past, although unspoken, infuses every scene with the possibility that May’s present life is a symptom of that event. May’s monologuing as she looks off-stage in this first scene signals that the audience is looking for something that isn’t immediately there. The events of the play—like the subsequently wounded birds—keep banging against the invisible glass of May’s past. It’s an absent history that seems to fuel the inability of the men in May’s life to relate to her. It also doesn’t permit the audience to construct a coherent story of May or the play, which McLean presents in five fragmented vignettes about May, the specter of her past, and the men, who rehearse various roles of male inadequacy—patronizing husband, venomous father, impotent lover, unsympathetic brother, and bureaucratic social worker.

The stage, designed by Nina Ball, is a place where these characters and their conversations with May don’t meet. Each person seems to interrupt the other’s speech. And the men, obsessed with May’s past, set up psychic obstacles to hinder her hunger for absolution. Ball’s set design ingeniously reflects this. Between scenes the back screen lifts up to reveal in its entirety the veiled contents of the play—May, the men and their props—which shuffle quadrilaterally and without expression on and off stage. If what we see in the action is the surface of May’s life, then Ball’s design reveals its backstage—the buried experiences that bubble up as the symptoms of May’s “synaptic omniscience.”

Danielle Levin’s thoughtful performance as May emphasizes the tension between seeking forgiveness within herself and without. The latter part wins her attention as she attempts to find satisfaction in being the “hurtee,” rather than the “hurter,” and, especially, as she attempts to satisfy the demands of the men by showing proof of her stability. Her encounter with Roy (Tim Redmond), whose rage at his own bumbling impotence in the face of playing a convincing “Dom” ironically fuels his own sexual fantasies, when he asphyxiates May. On the other hand, in a surprise visit by Abel (Tim Kniffin), she worries about her baby’s sleep, while Abel writes commentary on his clipboard about May’s fitness to be a mother. Because Abel is a stranger, he is as difficult to read as it is for May to read the evaluation form he guards with professional calm.

Most impressive in the play however are Richard Louis James and Joe Estlack’s performances as Duncan, May’s father, and Denis, her brother. When May visits her dying father, the pain of his terminal illness reaches every ear open to James’s screaming speeches for his morning oatmeal. He succeeded in evoking in me the familiar pang of shame particular to parental embarrassment. And the abatement of such spectatorial discomfort left me relieved, at least temporarily, when he entered a morphine-induced dream-state that reveals his own personal shame at May’s past. During this quite literally excruciating visit, May tries to comfort her father and find solace in the fact that, “Strangers smile. It’s normal.” as if normalcy were all she could aspire to.

Estlack’s performance as Denis in the fourth scene incorporates the best aspects of the play. The light (Kurt Landisman) impresses the audience with the crisp Fall shade of trees hanging over a park bench, while the ambiguity of the play manifests: the seasons appear to change, but does May? When sitting with May on the bench while she explains that she’s pregnant, Denis responds to her with a host of vitriolic curses. Both speak rapidly and at the same time, and neither seems to respond to the other. May talks herself through every “nook and cranny” of her synaptic omniscience, but Denis seems to read from an index of curses. Due in large part to the intense chemistry between Levin and Estlack, it never becomes clear which character enters or leaves the solipsistic spiral of obsession and anxiety. Ambiguities like that in this scene render the affective force of the play.

Ultimately, the play’s performance and the parataxis in the title ask us to wonder whether our relationship to strangers, which is brought about by the absence of a relationship, is any different from our relationship to our family, lovers, or children. The play suggests that we, disconnected like the vignettes of Strangers, Babies, each bear a personal burden—the inability to know how we relate to other people, and the anxiety that we may nevertheless be responsible for bits and pieces of their life’s experience.