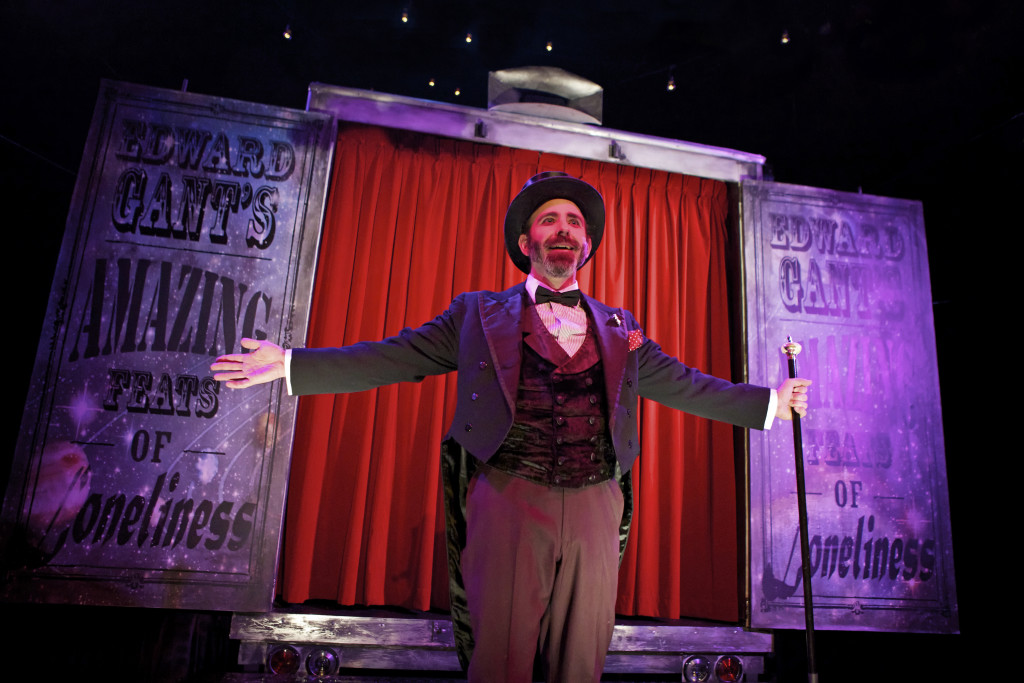 Thinking about the conflict that Edward Gant’s Amazing Feats of Loneliness wrought in me actually moved me. I mean the conflict that I felt about the play’s superlative performance—I felt enjoyment—and the complex feelings evoked by Anthony Neilson’s script—I felt ambivalence. It’s a script that evokes the bawdy tradition of “low” popular theater and attempts a “high” theater that thinks about itself (we’ll call it meta-theater). The script showcases performance and The Shotgun Players take full advantage of this. Yet, the writing doesn’t fulfill the promise of the meta-theater it depends upon. Nevertheless, the experience impelled me to think through something akin to a meta-theater review, which clarified for me, in the slow painful duration I call my thought, what I think of “the theater review.”

My normal “theater review” might have begun as follows:

“Equal parts rustic circus, Edwardian vaudeville, and Christmas pantomime, Edward Gant’s Amazing Feats of Loneliness, directed by Beth Wilmurt, promises in part a variety show that entertains. The play makes good on its title and presents three vignettes about lost love and its subsequent loneliness that successively build toward a not entirely surprising climax. They are partly narrated by the showman, Edward Gant (Brian Herndon), and partly enacted by his idiosyncratic troupe, which includes the leading lady, Madame Poulet (Sarah Moser), the melancholic dissenter, Nicholas Ludd (Patrick Kelly Jones), and the doggedly loyal Jack Dearlove (Ryan Drummond). Musical interludes with ukulele, accordion and barbershop quartet divide the three ‘Feats of Loneliness’ and showcase the breadth of talent in the actors, all of whom perform their various roles magnificently.

The theatrical space could only be described as a successfully integrated outdoor travelling show. Gant and his actors perform on a stage jutting out from the back of a semi-truck (set design by Nina Ball) to a group of spectators living in one stop on the troupe’s presumably endless tour. Being an “outdoor performance” inside a theater, the frame of the play allows the actors to make use of all of the Ashby Stage’s space to the hilarious ends of slap-stick. Thus, the casual atmosphere of a travelling show took its effect: during the performance, the audience let escape some ‘Mms.’ and ‘Ohs!’ and, during the set changes, the audience spoke freely about what they had seen with a little (good) judgment here and there but mostly excitement.”

All of this would be true were it written, but it wouldn’t incorporate the invitation to the audience at the beginning of the play nor the meta-theater that it inaugurates. And the invitation is lofty. The play, like the book of Genesis, begins with a cosmic dumb show. Poulet, Ludd, and Dearlove lead strangely compelling and beautifully wrought models of the sun, moon, Mars and Saturn in orbit around a model earth that lowers from the ceiling (props by Kirsten Royston). While narrating the creation of the universe enacted before our eyes, Gant invites the audience to assume “the aspect of God.” If the earth becomes the center focus of the cosmos again, then Gant only reverses the Copernican turn astronomically: man’s interior orbits—especially of love and its complement, loneliness—are the center of Gant’s narrative-theater and the audience is to look upon them as objects of its creation. But the questions that the play asks near the end (too late) and doesn’t think through are immediately relevant to this opening act. Do the spectators assume the aspect of God by witnessing the performance and, by seeing, making it so? Do they sympathize with their loneliest of creations? Or is Edward Gant the God-like author of this performance, manipulating the audience’s emotions by authoring the script that his acting troupe and the audience must follow? The play’s answer seems to be all of the above. But something about that feels wanting.

In the last third of the play, Nicholas Ludd stalls for time before the next act by reciting some of his original poetry, “The Night Watchman” and “What Need Have I of Whimsy?”. When he forgets the climactic line of the latter villanelle, we realize that this has been the third act all along. The “Phantom of the Dry” haunts Ludd as he tries to remember his line (going “dry” we are later told means forgetting one’s lines) and a ghost of childhood past—a forgotten and discarded life-sized teddy bear played by Madame Poulet—asks for an imaginary cup of tea and slice of cake, the preparation of which is a conventional Stanislavsky muscle memory exercise. The scene, manipulated into theater by Gant, forces Ludd to perform the whimsy he derogates in his poetry, distracting him from completing his poem about oppressive poverty and, ultimately, asking him to give it up. Ludd’s poetry asks that art deal with “real people” and “real issues” and the scene itself blurs the line between script and authentic individual expression, whimsy and reality. In the end, Ludd feels like a pawn, who wants to reach beyond himself, and so do I, especially in the emotionally manipulative moments, when, for example, the ragged teddy bear tells a classically painful story of his owner’s innocence lost in order to distract us from Ludd’s “realism.”

This same ambivalence I felt when watching the play carries over into reviewing it. The above would-be theater review would feel to me like I was writing a “theater review” (obviously), a form perhaps dangerously close to obscuring entirely what I think in favor of my general obligation to be positive. There seems to me to be two poles when approaching the genre, which I assume are conventional to more experienced reviewers. On one hand, I could write what I honestly think about the play and use it as an occasion to talk about what I feel or find interesting, while preserving the excellent work of the people who put it together. On the other, I could participate in the 700-word advertisement that constitutes the “theater review,” of which 350 words are quotable strings of adjectives. Writing in this latter way somehow feels like giving in to Edward Gant’s version of loneliness in ways I think Ludd’s character wants to resist. If I felt the pang of loneliness in this play, it wasn’t Gant’s version of it—that is, the version that produces the reliable sensation of opening an old wound because Gant knows the audience will feel it. Rather, I felt keenly Ludd’s mode of loneliness, and also the loneliness of the actors who have even less of a voice, Madame Poulet and Jack Dearlove. These voices all go mostly unexpressed because Gant believes in making his own experience the central concern of the play. Ludd seems not to know if his voice matters. He wants it to have some effect. But he instinctively makes the ethical decision to speak about “real people” and their experience of “real issues” instead of himself. Unfortunately, he also unravels his own ideals: Ludd recites poetry alone on stage—the stereotype of self-centered expression—and also with a not-unrecognizable dose of self-righteousness. I feel ambivalent about that too.

But in the spirit of Ludd’s gesture, I’ll try my own modest version of his attempt at self-expression, but in theater review form. I’ll try keep it more or less isolated to this paragraph. Here it goes. Edward Gant knowingly and overtly manipulates the audience’s feelings for the promise of meta-theatrical stakes, but, in the end, gives them up to ask us to sympathize with Edward Gant’s personal love and loneliness. And I think the brown face of “Ranjeev the Uncomplicated” is uncomplicatedly uncritical and actually shocking, even if it is a play about vaudeville conventions such as brown or black face and cross-dressing. These are problems with the writing and not the performance. Whew.

But, fortunately for us, the script does not a performance make. And I think what it so successful about the The Shotgun Players’ direction, acting, stage and prop design in Edward Gant is that they manage to force you to pay attention to the ambivalent feelings that the theater might evoke, even when that ambivalence is constantly subverted or hidden by enjoyment. I should emphasize that I think the theater should be able to make us feel ambivalent and that ambivalence, for all its slow thoughtful indecision and resulting discomfort, could be something to value. I think that the strength and weakness of Edward Gant’s Amazing Feats of Loneliness is that it opens a lot of questions and leaves them unanswered, all while distracting us with the whimsical performance of, as Gant puts it, “all that is superfluous to survival.”