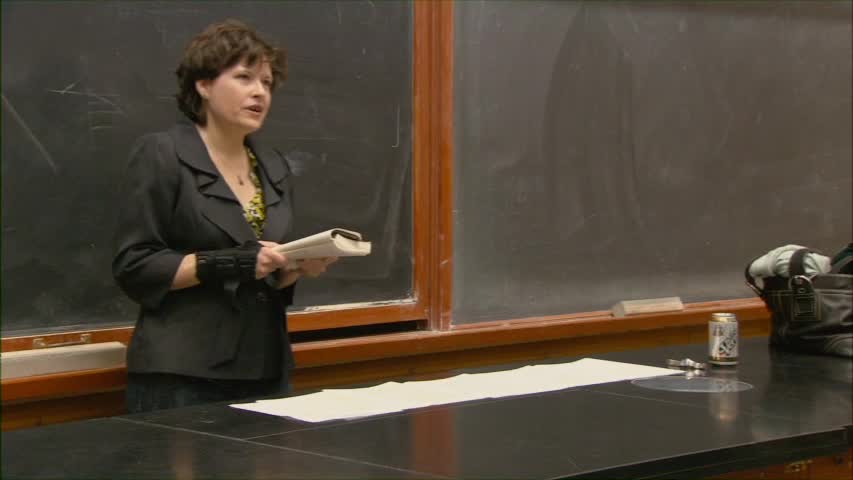 Renowned documentarian Frederick Wiseman’s At Berkeley aired on PBS in January 2014, clocking in at 4 hours and 4 minutes long. The documentary centers on extended, intimate looks inside Berkeley classrooms and administrative meetings. Of these classrooms, two happened to hold classes being conducted by English Department professors: one by Professor Mitch Breitwieser and another by Professor Maura Nolan. Here, Professor Nolan reflects on the experience of watching herself teach in the film, as well as on the film as a whole.

I have never seen myself teach before. Hearing my voice and seeing my gestures as I lectured on John Donne’s “Elegy XIV” was a curious experience; of course, I know what I say in lectures, but I normally don’t have a sense of what the students hear and see. Seeing myself as a student might see me had a strange distancing effect, as if I were watching someone else inhabit my body and my voice. I wear a brace on my right wrist, and I was shocked to see how large it looked. I tend to forget that it’s there, but I can now see why people ask me about it all the time. It’s really big!

My personal experience extends in some ways to the experience of all members of the Berkeley community watching Frederick Wiseman’s film: we’re seeing ourselves as someone else sees us. We’re suddenly noticing aspects of our campus that look much more prominent or dramatic than we had imagined. We see parts of ourselves that we don’t like very much. We are surprised by aspects of ourselves that we often ignore. Above all, watching the film makes us realize that Berkeley is both much bigger and much smaller than we thought.

Because the film follows the Chancellor and his senior leadership team so closely throughout, it creates the impression that Berkeley is a small and cozy community. We see the same faces again and again, and we get to know Chancellor Birgeneau, EVCP Breslauer, and the others fairly well as we see them react to a variety of challenges over the course of four hours. At the same time, the film is so full of varied Berkeley enterprises, people, units, groups, classes, labs, and teams that the cozy campus evoked by Chancellor Birgeneau’s leadership team seems to expand infinitely. Between the various scenes in the film, Wiseman uses outdoor shots of the Berkeley campus as well as images of building interiors, all of which include many Berkeley people engaged in their everyday lives. These shots create the impression that Wiseman could have told an infinite number of Berkeley stories, one or more for each person we see lying on the grass reading a book or walking across Sproul Plaza.

This double perspective on the University, as both a small community and a large and varied institution, captures – and refuses to resolve – a key tension on campus. For students who have just arrived here, anxious to succeed and unfamiliar with a major research institution, Berkeley seems terrifyingly big. It is easy to feel alienated and lonely amid the crowds of students who flood onto campus each semester, all trying to navigate this complex environment. Those of us who have been here for a while – administrators, faculty, grad students, advanced undergraduates – sometimes forget what those early feelings of alienation are like. We have carved out communities that make Berkeley feel smaller and more comfortable to us.

But At Berkeley reminds us that not everyone feels comfortable here. Leaving aside the larger narrative about state support for higher education and the role of student protesters, the most powerful scene in the film, to me, was the discussion among African-American, Asian-American, and white students about study groups in STEM disciplines (science, technology, engineering, math). Watching a young African-American woman describe how she has been deliberately excluded from study groups by her peers was a painful look at the role of racism in the classroom and among students. One young man tried to explain why this exclusion happens, saying “They have to prove themselves. You don’t want someone in your group who won’t pull their weight.” Another student then asked why Asian and white students don’t have to prove themselves, but African-American and Latina/o students do. No one was willing to answer. This exclusion from study groups has far-reaching implications. Studies have shown that the key to success in STEM courses is group work – getting together with a study group to work on the problems and concepts outlined in lecture. If certain students are systematically excluded from this system, they are automatically disadvantaged on exams and other assignments.

Most of the students responsible for excluding their peers don’t see themselves as racist. Instead, I suspect that they understand their actions as dictated by what they perceive to be the cutthroat environment of STEM courses. Whenever resources are scarce, prejudice and discrimination arise as people look for ways to advance their own interests over those of others. When people feel under threat, they seek out ways to distinguish “us” from “them” in the hope that banding together with people like them will repel whatever danger or scarcity they face. The students in the film experience their classes as an environment of scarcity, one in which it is hard to succeed without the help of other “smart” students. Their fear of failure leads them to rely on stereotypes about racial and ethnic groups; their fear of being called racist leads them to use euphemistic phrases like “who can contribute the most” or “who won’t be a drag on the group” to describe a process of exclusion. These phrases are revealing, because they show how much the white and Asian students perceive themselves to be closing ranks, protecting the welfare of the group by excluding members they assume to be weaker.

I doubt that STEM is the only discipline in which this kind of exclusion happens, but it is very easy to see it in the competitive environment of the sciences. Students in the humanities, for example, don’t compete with each other for grades; there are rarely any curves and each student is judged individually. It wouldn’t be fair to stigmatize STEM, however; I’m sure that a diverse group of English or Comparative Literature or French majors could hold a very revealing conversation about the dynamics of inclusion and exclusion across racial and ethnic groups – and perhaps that is a conversation worth having. My hope for the future is that honest conversations like the one in the film might provoke changes in the way that not only students, but also GSIs and professors, approach questions of inclusion and exclusion, equity, and racial and ethnic stereotyping. For example, professors can change the way they institute study groups in class, a suggestion made by one of the African-American students in the film. The program that I direct, Berkeley Connect, is especially committed to diversity; we have been working with participating departments and future departments to come up with ways to build better communities, in which all students can get the support and mentoring that they need. There is no quick solution, but At Berkeley shows us the work we have to do to make our university into the kind of community we want it to be.

Despite the fact that I have written so much about one of the darker aspects of At Berkeley, my experience of watching the film overall made me proud to be a faculty member here, at a place that values transparency and free speech, a place where administrators, faculty, and students are willing to be shown – warts and all – for the world to see. At its best, Berkeley is the university described by the group of Cal Veterans who appear in the film: a university that reaches out to students from every background while maintaining the high standards that have earned us an unsurpassed reputation for academic excellence. As one Cal Veteran says ruefully, “this place will kick your ass.”  We’re proud of that. We’re equally proud, though, that we strive to create the support networks that all students need to thrive here. We do have things to work on, as the film makes clear, but I don’t think students can find a better place to earn their degrees and build their futures than at Berkeley.