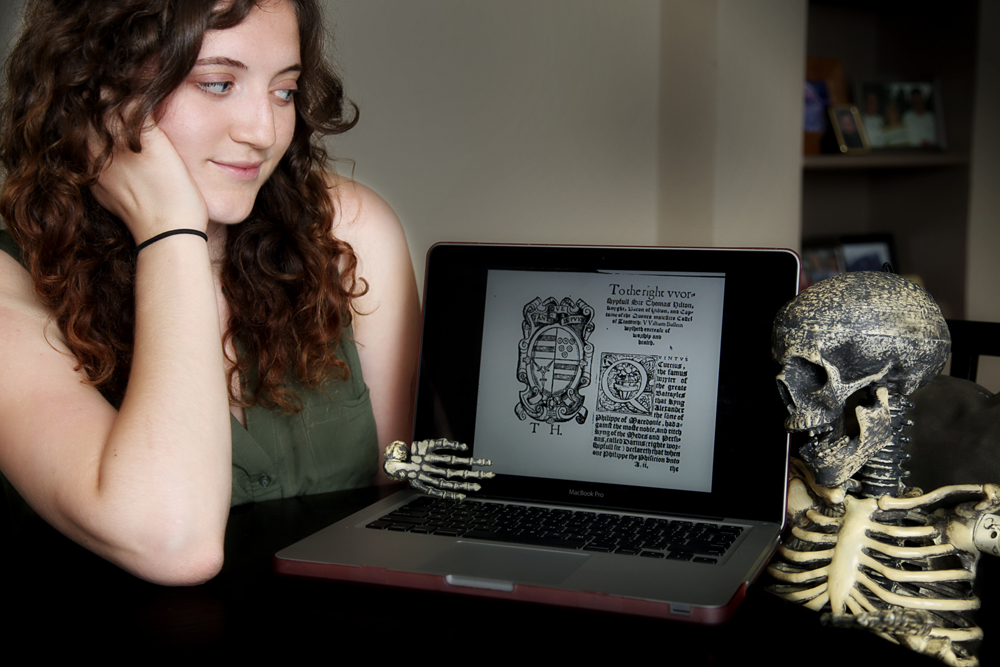 Caitlin Lowe is a current student in the English Department at Cal (class of ’15). This summer, she was given the opportunity to pursue independent research through the Student Undergraduate Research Fellowship (SURF) grant. SURF is a campus-wide award that supports student research under the supervision of a faculty sponsor.

What follows is Caitlin’s reflection on her summer of research.

My project combines two major fields: religion and literature, specifically from the Early Modern/Renaissance period. It started with my interest in King Henry VIII’s split with the Catholic Church in 1534 that brought about the social and political turmoil known as the English Reformation, in which the Church of England replaced Catholicism as England’s national religion. In order to study the social, political, and theological responses to the politically imposed mass religious conversion of England, this summer I researched Early Modern print books that involve the Bubonic Plague. Why Bubonic Plague of all things?

Well, Protestantism worked to dismantle the excess and hierarchy that Catholicism had created, in order to construct more direct connections between the congregation and God. However, in this action, Protestantism broke the living’s connection to the dead and mortality by doing away with Purgatory and prayer to saints. Lacking these two important conceptual frameworks that mitigated death, writers and intellectuals were left with the task of theologically and philosophically constructing a new relationship to man’s mortality. This pressure was intensified by the pandemic resurgence of the Bubonic Plague from 1564 to about 1666.

My original research question asked: how can literature be used to express doubt in a society ruled by religion? I read testimonials, dialogues, pamphlets, and prayer books along with about 33 secondary source books on religion, plague, the body as a metaphor, history, and the Danse Macabre looking for the doubt I was sure existed.

However, the more literature that I read from Elizabeth’s reign, the more I realized that what arose was not doubt but an entirely different way in which to interpret religious texts in order to fit early modern plague. Rather than adhering to the longstanding body of religious text, writers were turning away from Biblical explanations of disease and punishment to instead create their own laws out of the literal material bodies of the dead and dying.

This is not to say that the writing became secularized. Rather, that Biblical examples of God’s plagues offered insufficient explanations of the plague that afflicted England. In Biblical plagues, there is a one-to-one ratio between sin and punishment. The Israelites sin so God sends a plague to punish them; the Israelites repent or stop the sinful action, and the plague is lifted. Yet, prayer and repentance could not alleviate the plagues of the 16th and 17th centuries, especially the outbreaks that reached epidemic proportion in 1563, 1578, 1593, and 1603. Worse, there was no obvious sin to name as the cause of punishment on that scale.

Thus, authors began to use The Bible’s laws as the basis for the laws they personally created out of material concerns. James Balmford’s A Short Dialogue Concerning the Plagues Infection (1603) turns away from the Biblical law of the lepers and purports action that can be seen as condemnable by Christian law. He calls for quarantine and the abandonment of the sick, claiming his authority comes not from the Bible but from the more pertinent “mortal contagion,” the pestilence. The material and very present plague usurps the mere ceremonial law of lepers from The Bible. Balmford’s text demonstrates a common trend of the writing that worked to understand the epidemic: the textual themes that arose to psychologically and theologically rationalize mass catastrophe made the present material world became more important than the immaterial spiritual world.

This movement of textual focus was intensified when texts began to show the treatment of disease and punishment of diseased bodies moved into the realm of the government rather than the realm of the Lord.  Shown by Thomas Dekker’s The Wonderful Yeare (1603) Death is seen as the origin of the disease rather than the Lord in the form of punishment. Dekker takes this metaphor further when he blames the Virgin Queen for the origin of the sickness. He claims in the text that as Elizabeth failed to give birth to a proper heir, she instead gave birth to “sicknesse” who was then nursed by Death. Death and sickness are seen as originating and operating in the material world. They are not connected to God or punishment from God, but rather punishment for failure in the political arena.

These are my preliminary findings after two months of intensive research. I spent most of the summer reading primary source documents. Modern technology like Early English Books Online, a digitized database of early modern print books, and the Oxford Database of National Biography allowed me to read original texts from the 16th and 17th centuries on my computer, download the PDFs, underline and leave myself notes on the pages without ever touching the priceless pieces.

As I approach the end of my summer project, I look forward to expanding my research project into a senior thesis. I am so thankful that I received this grant as it has taught me how to work diligently alone on a single project, how to read an intense amount of literature, and how to evolve a research question. The grant gave me the exceptional opportunity to work directly with my brilliant faculty mentor, Kevis Goodman, who pushed me to work hard and asked me the questions that got me to this point. Most importantly, the grant has fuelled my desire to go to graduate school and pursue my passion for research.

I will be presenting my findings at the end of summer SURF Conference on the 25th and 26th of August along with the rest of the SURF cohort. More information about the original research projects as well as details about conference can be found on SURF’s website. My experience this summer has been invaluable and I encourage all who are interested in writing a thesis or pursuing research to apply next year.