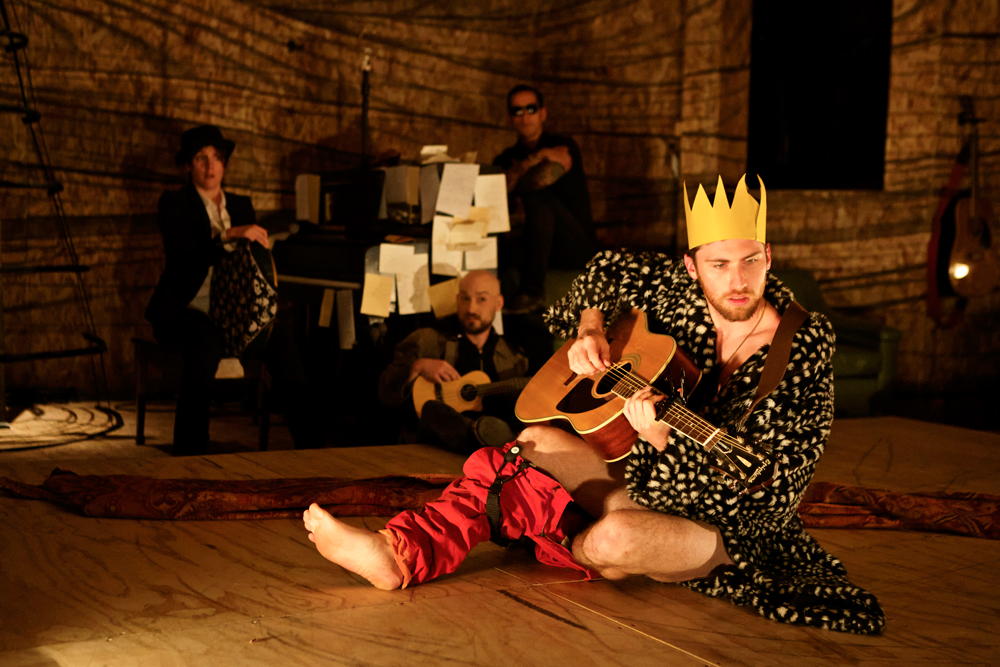 In “On the Scene,” a series on theater, we ask current graduate students with an interest in theater to review select local plays. For those of you in the Bay, this will be an excellent way to keep track of nearby theatrical offerings. For those of you elsewhere, perhaps these reviews can re-create a little slice of Berkeley theater for you.

The sixth piece in the series is a review by Aileen Liu of The Shotgun Players’ production of William Shakespeare’s Twelfth Night at the Ashby Stage. It has been extended until August 24, 2014. Call or visit their website for more information: (510)841-6500, www.shotgunplayers.org.

Although Twelfth Night is considered a comedy, the Shotgun Players’ adaptation invites us to consider all the ways it isn’t.

To be sure, Shakespeare’s play provides plenty of opportunities for farcical hilarity and physical comedy, and the production takes full advantage. The characters of the main plot are getting themselves all twisted up over love, cross-dressing, and mistaken identity. At the play’s maximum point of confusion, identical twins Viola (Rebecca Pingree, wide-eyed and entreating) and Sebastian (Will Hand, charming but underused) are each mistaken for the other by those around them. Antonio (Sarah Mitchell, in an inexplicably gender bent role) asks Viola for his money back, thinking she’s her brother Sebastian. Sebastian marries Olivia (Ari Rampy, who plays her character’s many emotional 180s with aplomb), but she thinks she’s marrying Cesario—Viola’s eunuch alter ego. Both Sebastian and Viola are confused by these two strangers’ passionate solicitations—Sebastian happily, Viola with dismay. All this confusion is enabled by the fact that Sebastian and Viola each believe that the other one is dead, with the result that everyone believes everyone else is mad.

The characters in the subplot, meanwhile, are dancing, drinking, shouting, peddling on a rickety stationary bike, cracking sex jokes, and drinking some more. At some point the group—Sir Toby Belch (Billy Raphael, who does his character’s name proud with a can of beer), Sir Andrew Aguecheek (Nick Medina, hamming it up to the crowd’s great delight), Fabian (Cory Sands, playing the role straight-faced with one very funny break in character on the night I attended), and Maria (Deborah Rucker, bawdy and bellow-y)—decide to play an elaborate prank on Malvolio (Terry Rucker, who displays impeccable comedic timing). Why? Because they’re bored, and because he’s always raining on their parade. They publicly humiliate Malvolio, and convince him that he is mad.

The audience delights in witnessing the characters’ confusion, because we’re able to see through it. That is, we are able to understand each character’s perspective, how they’re interpreting their reality, and hold in our minds all of these perspectives simultaneously. Shakespeare knows the deep pleasure in being able to see at once multiple, conflicting points of view. That’s one of his many gifts to us. He knows, too, the feeling of transcendence that can accompany moments of revelation—when all those points of view suddenly collapse together, into unity. “O Time,” Viola says, early in the play, “thou must untangle this, not I. / It is too hard a knot for me to untie.” When Viola and Sebastian at last come face to face toward the end of the play—the production stages this beautifully, with the twins standing closest to the audience and the rest of the characters framing them in a semi-circle just behind—I felt chills.

Twelfth Night is considered a comedy. This, in spite of the lovesick desperation and casual cruelty of the main characters, each one in love with precisely the wrong person. This, in spite of the uneasiness of the play’s ending, in which Malvolio threatens the rest of the characters—“I’ll be revenged on the whole pack of you”—and Feste (Jeremy Vik, who has some mean juggling skills) sends us off with a chilly, wistful final song—“When that I was and a little tiny boy, / With hey, ho, the wind and the rain, / A foolish thing was but a toy, / For the rain it raineth every day.” (This last song, along with the other full ensemble songs, shines.) If there is pleasure in seeing disorder restored to order, disunity collapsed into unity, Shakespeare denies us that pleasure, by leaving Malvolio and Antonio conspicuously outside the play’s conclusion.

I’ve mentioned the songs, which are original compositions for this production. They tend to be in minor keys. Songs in a major key, like when Malvolio, stripped down to yellow stockings and cross-garters, guitar solos for a revolted Olivia, feel parodic. The Ashby Stage marquee and the playbills prominently feature the first line of the play (which doesn’t appear as the first line in this production, curiously): “If music be the food of love, play on.” What it leaves out is how quickly Duke Orsino (Ben Euphrat, resplendent in an oversize coat and charmingly handmade crown) changes his tune: “Enough; no more. / ‘Tis not so sweet now as it was before.”

Shotgun Players’ production of Shakespeare’s Twelfth Night, directed by Jon Tracy, music by Shakedown, is currently playing at the Ashby Stage (1901 Ashby Ave. Berkeley CA 94703). The show has been extended to Sunday, August 24, 2014. Call or visit their website for more information: (510) 841-6500; www.shotgunplayers.org