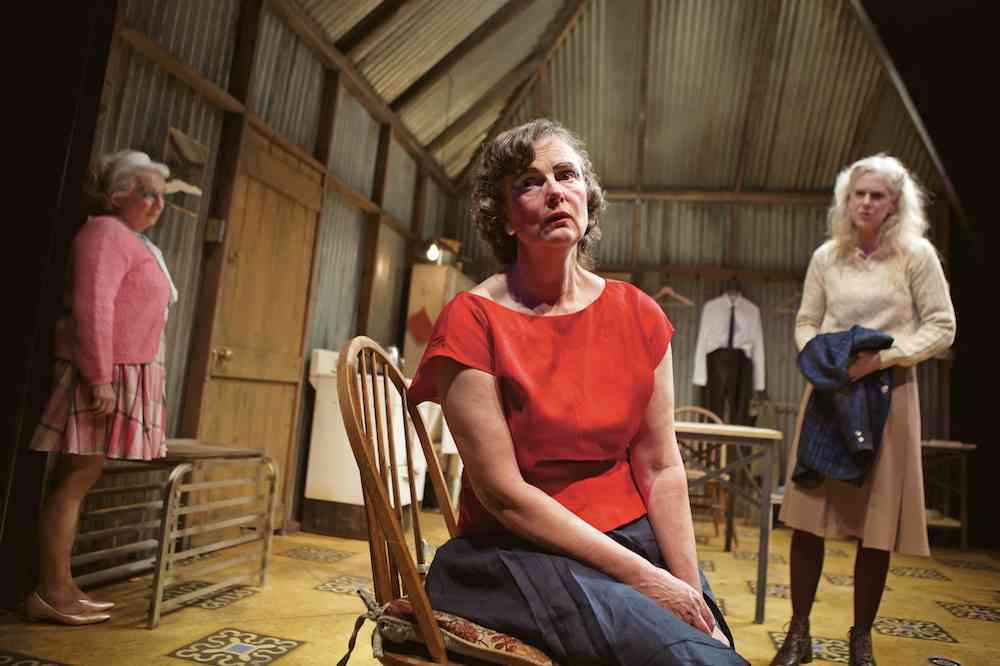 The seventh piece in the series is a review by Aileen Liu of The Shotgun Players’ production of Enda Walsh’s The New Electric Ballroom at the Ashby Stage. It runs until October 5. Call or visit their website for more information: (510) 841-6500, www.shotgunplayers.org.

The New Electric Ballroom takes place entirely inside a kitchen. In the room, three sisters sit and talk, stand and talk. A glass bowl holds a single slip of paper. A cake sits untouched on a side table. Three outfits hang on the wall—party frocks, for two women and one man. A tray of fish squats by the door. A man comes in and out of that door, bearing more trays of fish.

In the room, sisters Breda (Anne Darragh, all hard edges) and Clara (Trish Mulholland, winsome, girlish) tell a shared story of a single evening. On that night, the teenaged Breda and Clara eagerly headed to the New Electric Ballroom to see Roller Royle perform on stage. We hear and see the story of that night at least twice, once from Clara’s point of view, once from Breda’s point of view. The sisters help each another out of their house dresses and into their party clothes to reenact the memory of that night so long ago. For Clara, it is a cream blouse, a pink-patterned skirt, and pink cardigan. For Breda, it is a red blouse and a blue skirt. Heels, garish slashes of makeup, and hair spray finish their grotesque transformations.

The youngest sister, Ada (Beth Wilmurt, enigmatic), when she’s not telling her own story of working for the local cannery, supplies Breda and Clara with their well-rehearsed lines when they falter, urges them “Louder!” when they mumble, and commands an ancient boombox that provides the soundtrack to the story. Ada’s smoothness of direction reveal that this story has been told a thousand times before, and that she plans to help her sisters repeat it a thousand times more.

Periodically, the door to their small shack is thrown open, announcing the arrival of local gossip- and fish-monger Patsy (Kevin Clarke). His presence—loud, blustery, unapologetic—freezes the women in poses and attitudes of nervous disregard. His monologue is interrupted only by Breda’s repeated insistence that he leave. Eventually he does.

We see this scene play out once. Then again. There’s comfort and humor in repetition, but it can also deaden. (On the night I attended, there was laughter the first time around, scattered nervous laughter the second time around, then silence.) The sisters come alive only when they veer away from their script, but they descend into verbal and physical violence. Perhaps it is better after all to stick to the script.

Then Patsy blows in, as always, but this time rather than sending him away, Breda invites him in. She orders him to strip. Clara bathes him, not tenderly. They dress him in a glittery suit to match their party dresses. Ada emerges. He jumps on the table and sings. He grasps Ada and pours forth a vision of a shared future, the two of them together. The air is charged with hope. Then: A revelation.

I’ve spent most of my review retelling the plot of the play, I realize. The New Electric Ballroom is all about telling and retelling, so in a way the shape of my review honors its essence. Storytelling is a uniquely human act. It shapes and warps our relationship to time, collapsing years into a single sentence, or stretching out a single moment into years. It helps us understand ourselves and others. It can also obscure understanding.

The New Electric Ballroom shows us that, like enchantment, storytelling has the terrible power to transform or transfix. Which will it be, for these characters? Will Ada break free of her older sisters’ cycle, or is she doomed to be a part of it? What place should memory and storytelling have in our lives?

Shotgun Players’ production of The New Electric Ballroom, written by Enda Walsh and directed by Barbara Damashek, is currently playing at the Ashby Stage (1901 Ashby Ave. Berkeley CA 94703). The show is playing through October 5, 2014. Call or visit the website for more information: (510) 841-6500; www.shotgunplayers.org