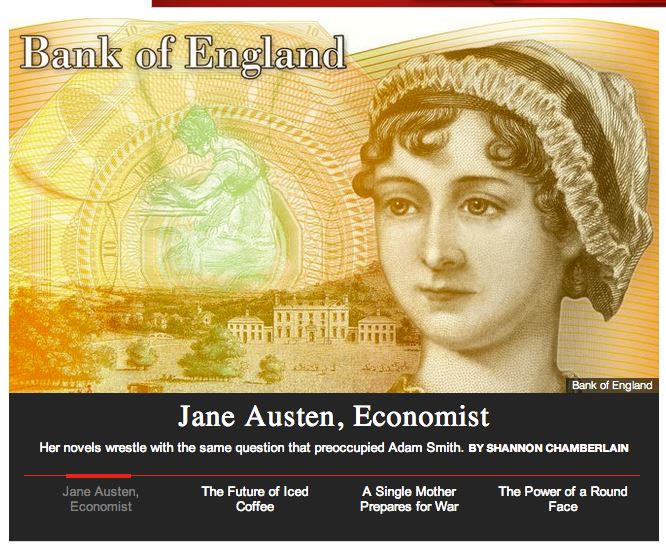 Shannon Chamberlain is a seventh year graduate student in the department, specializing in eighteenth-century studies. Her dissertation is about Adam Smith and the rise of the British novel, and this summer, she had the opportunity to turn some of that research into a series of articles for the Atlantic Monthly. This is her account of what it was like to write on academic subjects for a non-academic audience.

In penning my title, I am well aware that this practice—writing for non-academic audiences—is one less and less in need of any defense. Many of my colleagues here at Berkeley have written beautifully for publications as diverse as The Awl, The Los Angeles Review of Books, and The New Yorker.

In the end, I think the person for whom the practice needed the most vigorous defense was—me.

My dissertation project here at Berkeley is an attempt to forge and revise certain connections between eighteenth-century novels and eighteenth-century philosophical terms like “sympathy” and “sentiment.” More to the point, it’s one of those projects that claims “everybody has been doing this wrong” in the nicest possible way, and then proceeds to catalogue all of the various ways in which everybody has been doing this wrong.

As such, I thought that about 10 people in the world would be interested in anything that I had to say about something as abstruse as the ways in which I think other academics had been misunderstanding Adam Smith on the subject of novels. I’d largely already done my personal reckoning with this future of obscurity and broader, even monkish cultural irrelevance when I got an email from the business editor of The Atlantic, Rebecca Rosen.

I’d pitched a very different kind of article for an upcoming series in The Atlantic, one that had absolutely nothing to do with literature or the eighteenth century. In a show of discernment that actually made me respect her quite a bit, Rebecca rejected this idea wholesale. But I’d also included a brief biographical note, almost as an aside, that talked about a paper I’d published in Persuasions, the Journal of the Jane Austen Society of North America. The paper was about Adam Smith’s economics and the strange ways that they manifested in the plot of Sense and Sensibility.

Now, Rebecca wanted to know if I might be interested in turning this work into something for The Atlantic.

Would I! This was The Atlantic, after all, a publication for which I’d unsuccessfully applied for internships three consecutive summers in college. Although this record left me with little confidence that I could complete the task, I agreed to give it a try.

It took weeks. I kept drafting pieces that I knew weren’t right, and which I didn’t even bother to send to my editor. One was too jokey and condescending; the next got bogged down in its own internal debates with hidden interlocutors. The challenge was that I was essentially trying to discuss two works (Smith’s philosophical treatise about the proper way of feeling for others, The Theory of Moral Sentiments, and Austen’s first published novel), one of which I thought my audience wouldn’t know and the other that I suspected it knew too well to entertain new ideas about. To my great surprise and in a stunning blow to my own self-image as a graduate student, I found that I tended to err in the direction of assuming my audience was stupider than it really was, which I now suspect is the more common mistake among academics.

Finally, I gave myself a deadline: if I didn’t get the tone right by a certain Friday morning in late July, I was going to either email the editor and tell her I couldn’t do it, or, more likely, slink off into ignominy without even an apology.

Something about the prospect of failing at the task made whatever part of my subconscious controls such things kick into high gear. With my final draft, I knew that I’d finally managed to write something that I’d read in The Atlantic. There were still some jokes, including at least one about Star Wars, but I felt I hadn’t compromised on the complexity of my thesis or done an injustice to either Adam Smith or Jane Austen, the patron saints of my dissertation.

I held my breath for several days before learning that Rebecca had really liked it, and wanted to publish it. Then, in the manner of any good editor, she began to change it completely.

I exaggerate a little, of course, but this is a part of the process that seems less familiar to us in the world of academic publishing. Sometimes a journal will request a few edits, but they’re usually to things like formatting, nothing very fundamental. An article is either acceptable or it isn’t, with very little room in between. This isn’t the way it works in popular publishing, at least not at The Atlantic. Unsurprisingly, my draft still had a few sentences that were too long, an entire couple of paragraphs that I was a little in love with but which Rebecca had determined had to go (she’d requested 2000 words and I’d given her closer to 3000), and a whole section on how eighteenth-century economic conditions like entail became transformed in modern updates of Austen novels. Gone, gone, gone.

The only substantial disagreement that I had with her was over a paragraph that cited the work of another scholar. The Atlantic wanted it out, probably because it seemed a little inside baseball for their readership. I agreed to modify the paragraph, but I wanted to keep the reference where it was, as a tribute to someone who I thought had done good work on the subject and deserved to be cited for it. Citing other scholars in popular articles, as I’ve learned, is a tricky business. With no footnotes to which to confine either your debts or your disagreements, you have to think really hard about what’s important enough to be integrated into the text of the piece itself. For me, at least, this was as much of a moral calculation as it was a practical one: plagiarism is the cardinal academic sin, and I wanted to avoid even the tiniest whiff of using somebody’s else work without giving him credit.

In the end, I was more pleased with the outcome than I could have ever hoped. I felt that the article had reckoned with the complexities of eighteenth-century moral reasoning about economics, but hadn’t talked down to its reader in the process. It was shared frequently on Twitter and Facebook and Rebecca was already asking for more. I’ve since published a piece that finally managed to justify my college purchase of The Marx-Engels Reader, and I have another essay upcoming about something closer to the heart of my dissertation, the influence of novels on the philosophy of Adam Smith, in which I get to talk at length about Samuel Richardson’s crazy, sexy, raucous Clarissa.

My advice to fellow literature academics thinking about venturing into these waters is, first, not to fear them as much as I did. I think there are plenty of people out there who like to see close readings and historical analysis of novels, poems, and plays, who remember college fondly and wish that they had more time to research the deeper meanings of their favorite works. We’ve all to some extent imbibed the lesson that the humanities are irrelevant to most people’s lives, but it’s just not true. Literature and art are the things that make life interesting and meaningful, and not just for those of us who read professionally. People can spend weeks of their lives on the internet arguing about George R.R. Martin’s latest. We, of all people, shouldn’t be underrating the importance of our own work.

My second piece of advice: don’t spend as long as I did agonizing about a title. It’s just going to get changed to please the search engine algorithm gods anyway.