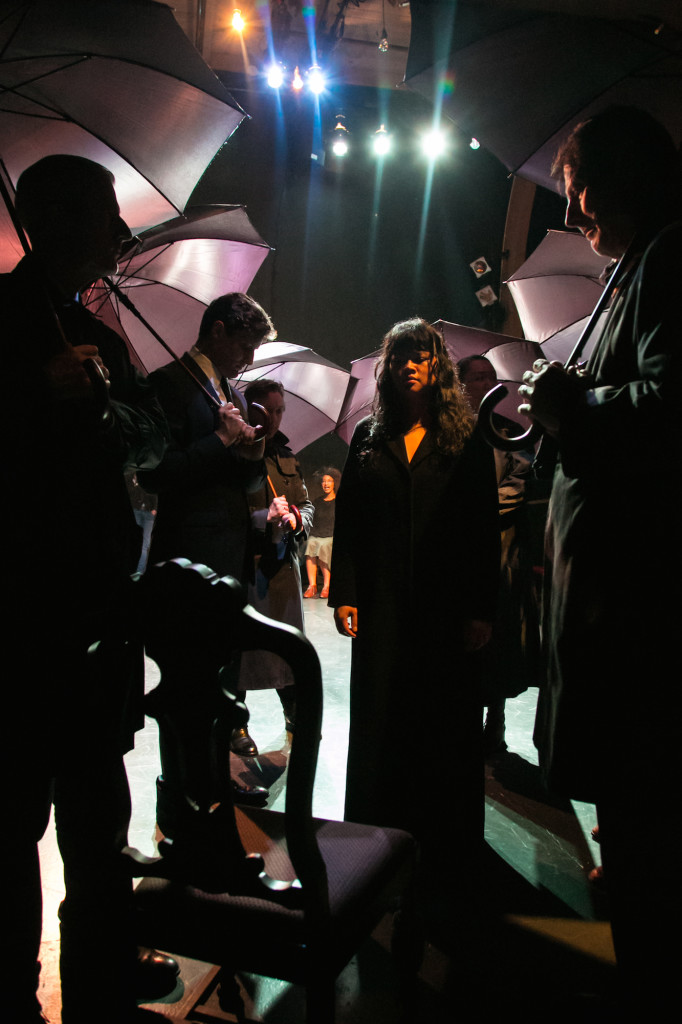 The ninth piece in the series is a review by Christopher Patrick Miller of The Shotgun Players’ production of Our Town at the Ashby Stage. It runs until January 25. Call or visit their website for more information: (510) 841-6500, www.shotgunplayers.org.

Just down the street from where Thornton Wilder graduated from Berkeley High in 1915, the Shotgun Players have staged a resourceful, nuanced version of Wilder’s famous regional drama. As with previous productions, Samantha Martin has stayed true to Wilder’s wishes of minimal stage props (aside from some tables and chairs) and stark, atmospheric sounds, leaving the reality effect of everyday, small-town life up to a series of pantomime gestures and clever positioning of actors in and around the audience. The physical austerity matched with the dramatic and sonic depth made one feel completely immersed in the town, even if that town feels mostly like a fiction.

Of course, since premiering in 1938 in Princeton, Wilder’s play about small-town New England life, located somewhere in the Southeastern part of New Hampshire, has become something of a regionalist or local color standard.  What I came away with after the first act, however, was a sense that the locality of the play seems relatively unstable, even for all the attempts at accurate geographical scene-setting by the “Stage Manager” (Madeline H.D. Brown).  For example, as someone from this part of New Hampshire, you would be hard pressed to find “I do declare” among the local sayings. Rather, what felt more at stake was whether or not a series of moralisms about family, community, or “the human condition” could be attached to or claimed by any particular place or person.  You can hear this especially in the repeated, ironically proud voicing of the “unremarkableness” of “Grover’s Corners.”

The Shotgun Players seemed particularly good at showing how the crux of the play lies with the way characters sort universals with particulars or generalizations with exceptions and how “our” sense of the ordinary comes from the fact that what characters say often doesn’t quite match up with where or how they live. The first act of the play seemed the most successful at expressing this tension, as the characters balanced the more self-conscious lines about dramatic production and constructions of the ordinary with its typology of small-town characters: the doctor, the housewife, the neighbor, the newspaper man, the dairy farmer, etc. The second act, which takes up the marriage of neighbors Emily Webb (El Beh) and George Gibbs (Josh Schell), felt a little more flat as the performers didn’t draw out the tension in Emily’s character between a more measured distance from the virtues of small-town life and giving in to the stability and security of marriage. The third act felt the most estranged, perhaps intentionally, as Emily is granted the wish to vicariously watch over a previous day in her life after dying in childbirth. We also meet the alcoholic choir teacher (Christopher Ward White) and Mrs. Gibbs (Molly Noble), who spoke their lines in a relatively deadpan, abstracted tone. What was odd about the performance, though, was that the frustrated judgment Emily delivers about the obliviousness of the living felt a bit too hyperbolic or divorced from the cleverly self-conscious world of the first act.