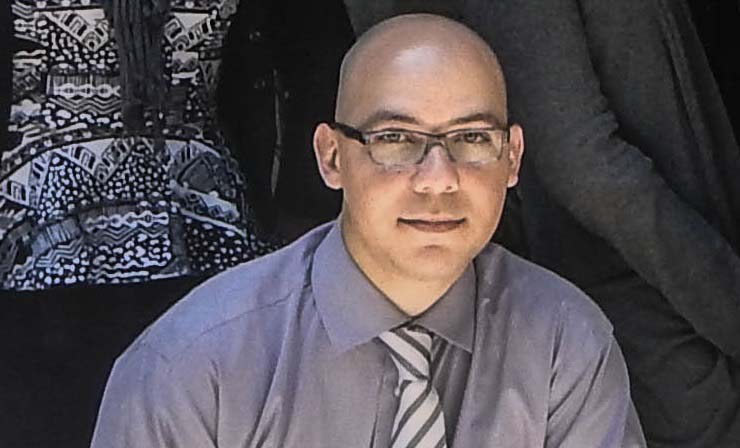 Dennis Velasquez (‘15) was given the opportunity to pursue independent research through the McNair Scholars Program and the Haas Scholars Program (the only student awarded both research fellowships for 2014-15). His project is a comparative study of strategies of literary defiance of English Linguistic Imperialism across disparate temporal and geocultural locations. He has investigated the distinct internal discourses of Tobias Smollett’s The Expedition of Humphry Clinker (1771) and José Antonio Villarreal’s Pocho (1959) in relation to one another.

What possible reason could I have for selecting an eighteenth-century text by a Scottish author and a twentieth-century text by a Mexican-American author for a comparative analysis? How is it that these wholly distinctive texts seemed to inform one another? The answer to these questions requires some digression, and intentional ambiguity, on my part. The first two upper-division English courses I ever enrolled in were: a course on Chicano literature and a Pre-1800 literature course. It was in these courses where the connection between the Scottish and Chicano experiences was forged. During a lecture in class one day, one of my professors began to discuss the vitriolic sentiments of a dominant English speaking culture towards members of a subaltern population. The hate speech included words like “dirty”, “lazy”, and “criminals,” in addition to other invective that relegated them to little more than subhuman savages who could not even speak English. The biggest complaint was that “they’re coming across the border to take our jobs.” It might surprise the reader to learn that this was a lecture in my Pre-1800 literature course, and the border being “transgressed” was that of England’s by their neighbors to the North, Scotland. The more I read and learned in these two classes, the more associations I identified between the Scottish and Chicano experiences. I soon discovered that I was moving into sparsely charted territory.

Innovative and canonical works within very diverse literary traditions, the novels of Tobias Smollett and José Antonio Villarreal have never been studied in relation to one another. Yet, upon close investigation, there exist astonishing commonalities in their texts regarding strategies of defiance against what Robert Phillipson dubbed “English Linguistic Imperialism”—that is, “the dominance asserted and maintained by the establishment and continuous reconstitution of structural and cultural inequalities between English and other languages.” Smollett and Villarreal were themselves members of subaltern communities living within predominantly Anglo societies. Concerning their most influential works, my research asks: to what extent might these authors be repurposing the discourse strategies of their respective predominant Anglo societies in order to defy their authority?

My summer travels began with my visit to the Archives and Special Collections of Santa Clara University.

Not knowing what to expect, I envisioned my first foray into academic research consisting of being made to pass through some sort of sanitizing chamber, given gloves, and harsh instructions which would make me fear even breathing improperly on the materials. Obviously, I was way off. The curator/coordinator, Sheila Conway, and her staff were fantastic. They provided me with unfettered access to the collections of works of José Antonio Villarreal (who was a UC Berkeley English Alum, class of 1950). I had the good fortune to review manuscripts, correspondences (private and public), audio lectures and interviews, reviews, books (published and unpublished), etc. from his life and career. This provided me with immense insight into his works, motivations, and reactions to the critical and cultural acclaim those works received. Best of all, the majority of the time I had the place all to myself. The campus and surrounding community are beautiful and very welcoming and I am indebted for their assistance.

From there it was time to visit the other side of the world. Prior to this trip I had never been outside of North and South America, and I am exceedingly grateful to the Haas Scholars Program for providing me with the resources to make this happen. My first stop was London, United Kingdom. The atmosphere and pace reminded me very much of my childhood home, New York City, but… older. Jet-lagged and out of sorts I made my way to the British Library the next morning. I registered as a reader, had my picture taken, was issued a library card, and proceeded to walk into one of the most amazing collections that exist under one roof. The library was massive, almost like a giant shopping mall complete with elevators, escalators, food court, and shopping center. I checked my belongings into the deceptively mysterious-sounding Cloak Room and went off to the Manuscripts wing of the complex. There, I was given some of the original works of Tobias Smollett that I had reserved. It was absolutely surreal to have in my hands works that were older than the United States government. It was equally mind-blowing to read private correspondences amongst British literary figures discussing “disturbing” rumors and events pertaining to the rebelliousness of the American colonies. Needless to say the remainder of the time I spent at the archives there proved to be equally fascinating. I learned much concerning Smollett, his contemporaries, his intentions, and the complexity of the changing society he lived in.

From London, I traveled to Glasgow, United Kingdom to attend the First World Congress of Scottish Literatures held at the University of Glasgow. The conference was excellent, and there was a strong UC Berkeley presence, though I was the only undergraduate. My faculty mentor, Janet Sorensen and my former GSI, Shannon Chamberlain both presented. I was grateful for this experience as it allowed me to see their brilliance outside of the classroom context. I was able to meet and mingle with professors, graduate students, and authors from around the world as they converged on Glasgow to share their appreciation of Scottish literatures. Events included dinners and tours of the city. City Hall was a magnificent edifice. All in all, I fell in love with the city and the people almost instantly, and look forward to returning someday soon. Perhaps as a presenter myself.

After the three-day event ended I was then off to Edinburgh. Edinburgh is a beautiful city, one which I must also return to soon. Although, I simply want to be a tourist the next go round. This last leg of my journey was for the purpose of spending time at the National Library of Scotland which houses some more of Tobias Smollett’s materials. Here I had the chance to pore over more private correspondences and was once again wowed by some of the things I came across. I read letters between David Hume, Adam Smith, Tobias Smollett, and Alexander Carlyle all making mention of one another. I had never imagined this kind of interconnectedness amongst these great Scottish figures. These letters were mixed in with other items which, even though had nothing to do with my project, were just really cool. There was one letter, which I assume was in ancient Gaelic (although I have no idea) that was so old it was written on some sort of animal skin (I hope). It smelled like beef jerky.

From there it was back to the Bay Area. I had only a few short weeks after returning from the United Kingdom to make up a summer’s worth of work and prepare for the 22nd Annual McNair Symposium. That I was able to put something together at all was just short of miraculous as I hadn’t even started sifting through the data I collected on my journey, much less have preliminary results ready to present. Berkeley was the host school this year and some 500 folks from 59 schools converged on our campus in order to present their research, mingle, and share ideas. Despite my panic beforehand the consensus was that my presentation went well. The conference was great. I was able to meet and connect with so many brilliant and motivated individuals whose projects really are going to make a difference in how we see things in a variety of disciplines going forward.

This past January, I presented my work at the Haas Scholars Winter Conference. That too went well.