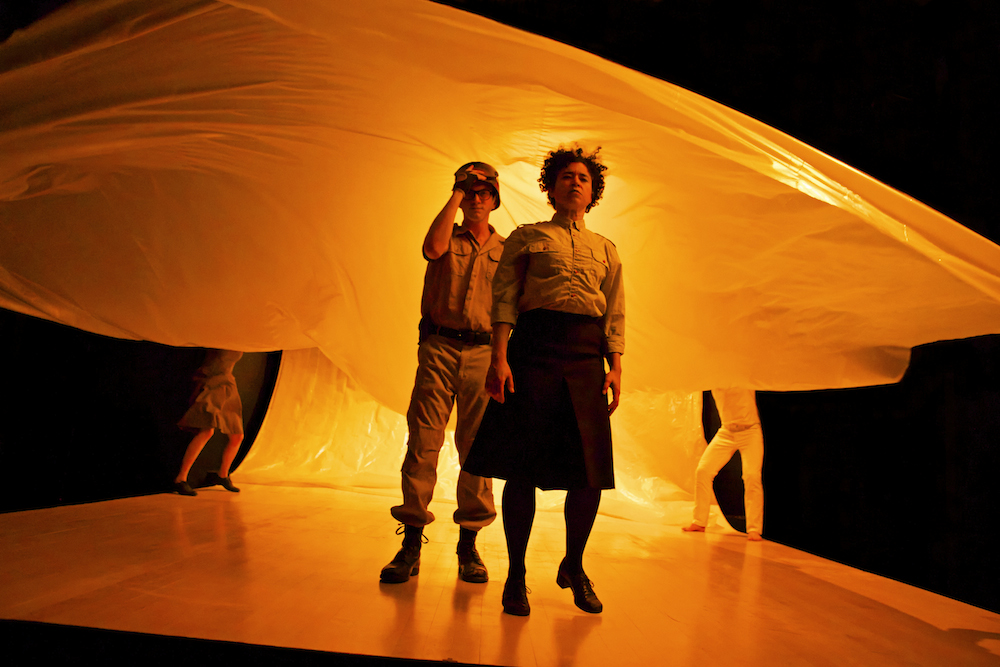 This is a review by Samia Rahimtoola of the Shotgun Players’ production of Anne Carson’s Antigonick, co-directed by Mark Jackson and Hope Mohr. It has been extended until April 26.

Three productions of the Antigone myth can be found on Bay Area stages this season—The Cutting Ball Theater’s Antigone, African American Shakespeare’s Xtigone, and Shotgun Player’s Antigonick, a performance of Anne Carson’s recent adaptation of the classical Greek tragedy. Staging the conflict between state law and social justice, the play’s resurgence speaks to the discrepancy between legal and moral orders. In this sense, the play uncannily joins conversations that have been happening around the country in the wake of the death of Michael Brown, the death of Eric Garner, and the 50th anniversary of Selma.

Set in the aftermath of the rebel invasion of Thebes, Sophocles’ classic tells the story of Antigone’s refusal to follow the ruler’s edicts. King of Thebes, Kreon, has decided that no traitor can be buried in his kingdom, leaving one of Antigone’s two brothers, who killed each other in the war, unburied. Antigone, following familial and divine laws, buries her brother despite the edicts, and is sentenced to death for treason. Upon hearing this, Kreon’s son Haemon, who is to marry Antigone, pleads with his father to release her. Kreon’s hubris prevails, and tragedy unfolds. By the play’s close, Antigone, Haemon, and Eurydike, wife of Kreon, have each killed themselves, and Kreon prays for his own death.

In her new translation and re-imagination of Antigone, entitled Antigonick, Anne Carson makes several revisions, including the invention of a silent character, Nick. Nick haunts the drama of the play. As Carson writes in her cast-list, Nick is “a mute part [always onstage, he measures things].” Primarily, Nick is the measure of time, and the play’s repetition of the phrase “in the nick of time” links him with the propulsion and weight of time’s passage.

Under the direction of Mark Jackson and Hope Mohr, Nick is hardly mute. Played by Parker Murphy, whose beautiful movements both captured and complicated the dramatic unfolding of the plot, Nick’s expressive gestures carried the play. Making choreography a central part of the performance, Shotgun Players’ adaptation of Antigonick draws on co-director Hope Mohr’s background in dance. While Murphy’s agile movements were a welcome inclusion, at times the extensive use of movement detracted from the dramatic tension of the play. For instance, the over-athleticism of the pivotal moment between Haemon and Kreon made it difficult to follow the actors’ speech. Although the scene certainly captured the mood of conflict, it missed the opportunity to approach the drama from the perspective most sympathetic to Kreon.

Perhaps the most riveting moment of the entire play occurs with Monique Jenkinson’s marvelous performance of Eurydike. Facing a projection of her own live-feed image, Jenkinson’s monologue effectively expands the emotional resonance of the play by interrupting the otherwise closed circuit produced by Kreon and Antigone’s competing visions of social order. In a rare moment, we are invited to step outside the ideologically charged conflict of the play to witness the immense psychic costs it exerts on both family and city.

Encouraged by Carson’s playful allusions to the play’s long interpretive tradition, which includes philosophical heavyweights like Hegel, Brecht, and Beckett, Shotgun Players turn the performance history of the play to account. Nina Ball’s brilliant set design evokes the constraints of fate, with its sloping, wooden quarter pipe that characters frequently try to crawl or run their way out of. But, it also suggests that the staging and interpretation of Antigone, after more than 2,000 years of performance history, has itself become part of the constraints that face any contemporary encounter with the classic tale. By managing to display this historical tradition as part of the fabric of the story itself, Shotgun Players, like Anne Carson, offers an inventive, nuanced re-imagination of the tragedy of Antigone.

The Shotgun Players’ production of Antigonick has been extended until April 26. Call or visit their website for more information: (510) 841-6500; www.shotgunplayers.org