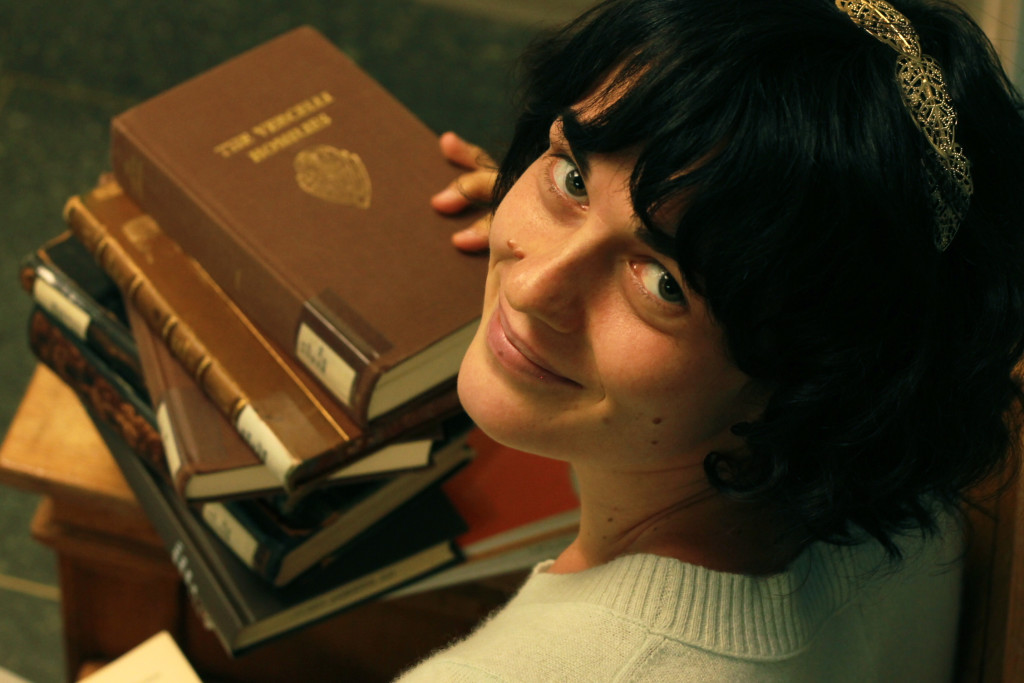 Amy Clark is a graduating senior, and was recently awarded the Charlene Conrad Liebau Library Prize for her English honors thesis, “More than Meets the Eye: Cultural Color Resonances in Old English Literature.” She plans to continue studying “Old-Englishy things” in Berkeley’s Ph.D. program starting this fall, and will be presenting her research over the summer at the International Society of Anglo-Saxonists conference in Glasgow, Scotland. Color is a funny thing. In one sense, it’s an objective phenomenon; light enters and is processed by the eye, and this process manifests in the brain as the perception of a color – say, blue. In another, it’s impossibly subjective; in contemporary English-speaking society we “feel blue,” listen to “jazz blues,” and admire Picasso for his “blue period,” even though no native speaker would expect these instances of “blueness” to look the same – or to look like anything, necessarily. These are the symbolic and cultural aspects of color, and they are slippery; they shift, they change, they surprise us.

My work on Old English color words began when I realized that few scholars had explored these non-visual color valences in Anglo-Saxon literature – and the research that did exist had been limited by lack of access to a comprehensive, searchable literary corpus. I, however, had no such limitation: the online Dictionary of Old English Corpus (DOEC), a searchable archive of all extant Old English texts, was at my disposal through the UC Berkeley library system. The question was, how could I use it to accurately assess color symbolism – a notoriously subjective, culturally specific, inherently slippery aspect of literature? earching corpus linguistics and contemporary English texts, it became clear to me that tracking color-referent collocation –relationships between specific color words and the things they described – would be the most concrete way to “pin down” these cultural resonances. But the DOEC alone wouldn’t allow me to track these patterns; for that, I needed my own system. I spent the next three months compiling a set of Excel databases that allowed me to track the color-referent collocations of three specific Old English color words: read (red), fealo (fallow), and sweart (black).

The patterns of association I found allowed me to draw some interesting preliminary conclusions. Read, for example, consistently described man-made objects of a very high value – sometimes seemingly in spite of their literal appearance. Sweart, on the other hand, was associated with sin almost 70% of the time, while fealo – yellowish-brown color – seemed to signify decline and decay because of its association with dying plants. These findings suggested that my initial hunch – that colors did have tacit literary and cultural meaning in Old English literature, separate from their visual significance – was correct, but I knew the numbers weren’t enough on their own. I needed to ground them in other forms of evidence from Anglo-Saxon England. For that evidence, I returned to the library. Each color required a different angle of investigation; for the role of read as a status symbol in material culture, I hunted down archaeological studies on Anglo-Saxon grave goods, studied print editions of early English homilies, and used Berkeley’s institutional access to digitized manuscripts from the Corpus Christi Library at Cambridge to consider the use of red ink in medieval literature. Fealo led me into the realm of historical linguistics, where I traced fealo’s Indo-European root sideways through Old and Middle High German, and forward into Middle English, in order to understand the changing role of color connotation over time. By the time I got to sweart, I found myself elbow-deep in the Handbook of Discourse Analysis, looking to work on functional grammar and corpus linguistics to explain why different types of color association appeared in different types of text. Though, of course, the DOEC was the most important tool I used during this project, each part of my research contributed to another – and each section sent me burrowing back into the library’s resources to hunt for clues.

As I near the final deadline for the completion of my Honor’s thesis, I am frankly astonished at how far my color words have taken me. My work will be presented this summer in Glasgow to some of the world’s most prominent Anglo-Saxonist scholars, who I hope will find the end result even half as informative as the research process has been for me. As I continue my studies in the Berkeley English Ph.D. program this fall, I have no doubt that the results of my undergraduate research will enrich my future work – and, with luck, my eventual contribution to the study of Anglo-Saxon England!