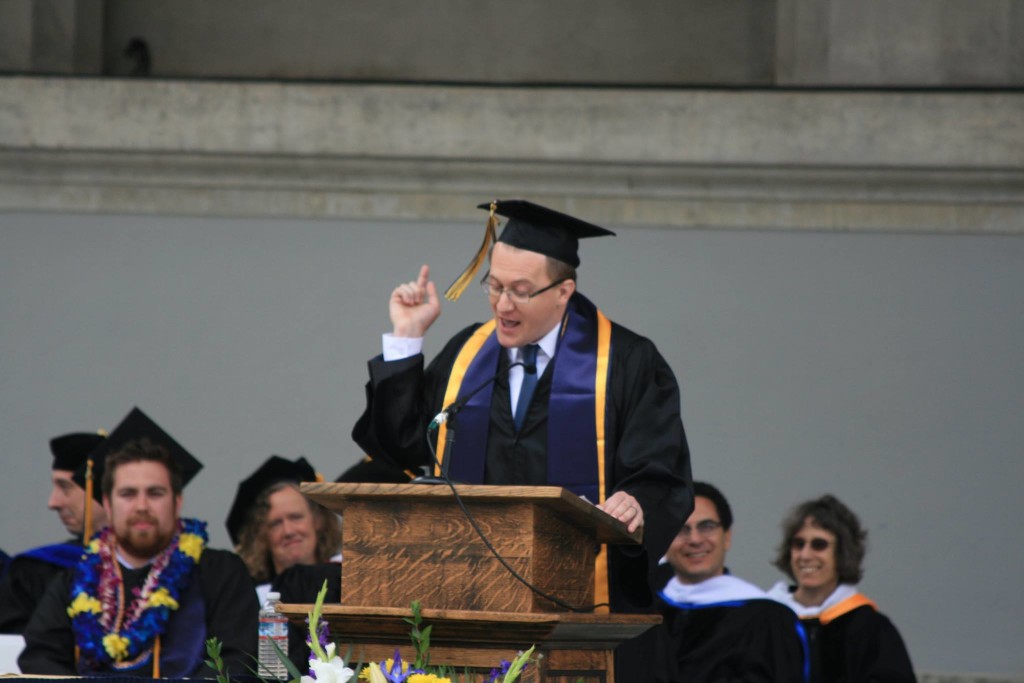 To kick off Fall 2015, we thought we would return to the end of Spring 2015 with Michael Shaw’s commencement elegy, delivered May 23rd, 2015 at the Greek Theater in Berkeley. If you’d like a bit more theatrical experience, you can click here for the video of the reading.

An Elegy in the Style of John Milton’s “Lycidas”

in Which We Mourn and Celebrate the End of

THE CLASS OF TWO THOUSAND FIFTEEN

and, in Leaving, Must Reconcile Their Joy, Grief, and Future Prospects.

Given at The Greek Theater, University of California, Berkeley, May the 23rd, 2015.

You’re leaving us, so a new crop

Of hats and gowns can sprout next year.

On this occasion of joy and fear,

Up one level in an unlevel field,

Where convention calls for hats in salutation,

But we’re just praying for an employment situation

To service our indebted tuition’s inflation.

Berkeley, I invoke you; I conjure you here for the last time.

I’ve come to give you up in elegy,

A death-defying feat in lines;

I call on the spirits and minds

That made you. Let me hear you Berkeley!

Berkeley, walking together, you and I,

In that “etherized,” Modern evening,

Where “women come and go / Talking of Michaelangelo,”[1]

“Between the curling flower spaces,”[2] walking

Back, on a Romantic afternoon, going

“Towards these steep woods and lofty cliffs”

Made “more dear, both for themselves and for thy sake,”[3]

And, earlier and earlier, to “A paradise within [us], happier far,”[4]

But not so fast and not so early,

Because in the shadow of your tower,

Singing hourly and thrice per day in bells,

We lag, in Berkeley Time, ten minutes past the hour.

But you have ended, Berkeley,

Ended the time when we needed shelter,

Ceased ringing, and scattered us to an open sea.

We were like the mottled, microbial mats, that ancient synthesis,

The proprietors of oxygen, life’s teacher,

But now we’re only single cells of a once-great creature.

Such is our loss, when you left us, Berkeley.

But why are you cut so short?

Four years perhaps, but I knew only two.

Get out: make way for a new cohort!

Are we so starved in this nation for good public education?

Feed the vices of corporate lenders on benders

Who will take our interest, in their interests, burn us ‘till we’re dépressed

In a not-that-Great Recession, that brought in concessions,

And the students and workers of Berkeley, they suffer these subtractions and retractions:

Cuts, flat, trims, the fat––except, we are the fat.

Curtailment without avail-ment, means a little haircut here, and a haircut

There, until we have no hair left: blinded and barely holding on these pillars,

But we, patiently, refuse, to pull, so we might earn this degree,

But we all know our education should be free!

But what education? What has my future self paid for?

People ask me about English, as in “English?” as in “What is that for?”

They want me to justify myself and this institution;

They think I should reassess, pursue success, a career.

Success, well, I guess that’s a forward destination, without fear,

Measured at the meat-market bars by the cars we drive, when we arrive,

We strive for this destination, but where is it? I want to know––show me success!

But success is made up. As Hank Green says, “If you’re smart enough and you’re dedicated enough and lucky enough and sacrifice enough, [you’ll] find out that…You get successes, but you don’t get success.”[6]

An open door that opens on successes,

Moments to create something, to help someone, to find

Moments of victory that, as Horace Mann said in 1859,

We should “be ashamed to die until [we] have won some victory for humanity.”[7]

Scatter us, Berkeley; scatter what remains

Of your little successes, because you’ll remain to blow

Future seeds into the valley, maintain

Your promise that another generation will grow

Where “You may trod me in the very dirt

Carried, as I am, in this, my bacca-laureate hearse,

Mean we’ve done this before,

Overcome, when faced with goodbye, before.

Our project, here in literature, is a cure for callous disconnection,

A space to see other lives complexly by reflection;

It’s all these lives we’ve lived, and more.

Though we might feel “far out to sea and alone…

We must not be “borne back ceaselessly into the past.”[13]

We can be that unmonstrous Monster, “fearless, and therefore powerful.”[14]

We can be the Truth, but we must “descend

T’ affections, and to faculties,

Which sense may reach and apprehend

Else a great prince in prison lies.”[15]

Though the world lies not beneath us, we can elevate it.

What is English literature except our task

To illuminate, to care, to implore?

And our world has so much to atone for.

This “What is English?” question that we face,

Is in where we place our values.

So take the Truth and wear it as a “mantle blue”

We wear our mantle everywhere,

[2] William Faulkner, The Sound and the Fury

[6] Hank Green, “You Will Be Forgotten…And That’s OK,” http://youtu.be/OjiMvcCzDBQ

[18] Special thanks to Professors Kevis Goodman and Robert Hass for providing feedback and guidance on this project.