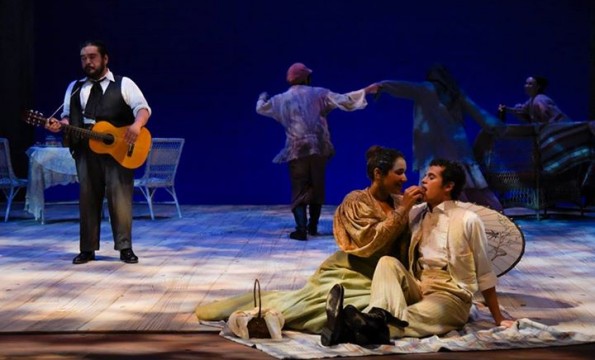 From October 23rd to November 1st, Cal’s Department of Theater, Dance, and Performance Studies staged a production of Anton Chekhov’s last play The Cherry Orchard, adapted by Libby Appel and directed by Lura Dolas.  English Major and Daily Cal columnist Kate Irwin had the opportunity to attend closing night; here is her review of the final showing.

Losing everything, starting over, moving on: Discarding the husk of one’s ancestral past is never easy. Such is the tragedy of Anton Chekhov’s “The Cherry Orchard,” a play written in 1904 about the economic decay of a Russian family unable to hang on to their treasured orchard and estate at the turn of the century. Though Checkhov intended the piece to be a comedy, the setup and dialogue has led to some ambiguity about the play’s tragic core.

UC Berkeley’s Theater, Dance and Performance Studies department’s six-show staging of “The Cherry Orchard” ran weekends from October 23 to November 1 at the Zellerbach Playhouse. In Chekhov’s four-act script adapted by Libby Appel, the loss of the orchard is the catalyst for compelling depictions of human emotional conflict and struggle for survival in a changing world. The orchard is but a metaphor, a placeholder for a bigger sense of familial identity lost with each successive generation as traditions fail to uphold the future. Directed by Lura Dolas, Cal’s rendition effectively depicts a tragedy with elements of dark humor that satisfy as much as they startle.

Cal’s “Cherry Orchard” stayed true to the original’s dual identity as both tragic and comic. It emphasized its characters’ individualized traumas over all else, each actor psychologically isolated yet intermittently drawn into the larger relational web. Some moments of verbal comedy seem a little forced, the more authentic humor arising through irony or dark silences between words. The monologues at times seem melodramatic, but perhaps some things are lost in translation. As the narrative perpetually reminds us, human needs, tastes, and rhetoric change over time.

Nevertheless, many stellar performances were delivered. Notably, Emon Alboudwarej as Lopakhin, who buys the estate, and Roger as Firs, who convincingly croaked and strained across the stage as the elderly butler rejected and trapped in the estate house at the end by his bourgeois former employers. Jessica Slaght as Lyubov, aristocratic co-owner of the estate, also delivered compelling emotional displays of simultaneous love and hate, longing and loss that emanated outwards into the crowd, made tangible through the elegance of her performance.

Closing night drew a sizeable crowd. Everything from the set design, carefully crafted to emulate the inside of the hollow estate, to costumes, character movements and dance sequences were streamlined and evocative, immersing the viewer in the play’s unique time and place. Cal’s adaptation successfully blended a minimalist stage aesthetic with rich, charismatic performances, offering a contemporary American take on the Russian classic.

For more information on The Department of Theater, Dance, And Performance’s future events and productions, please visit the Upcoming Events page on their website.