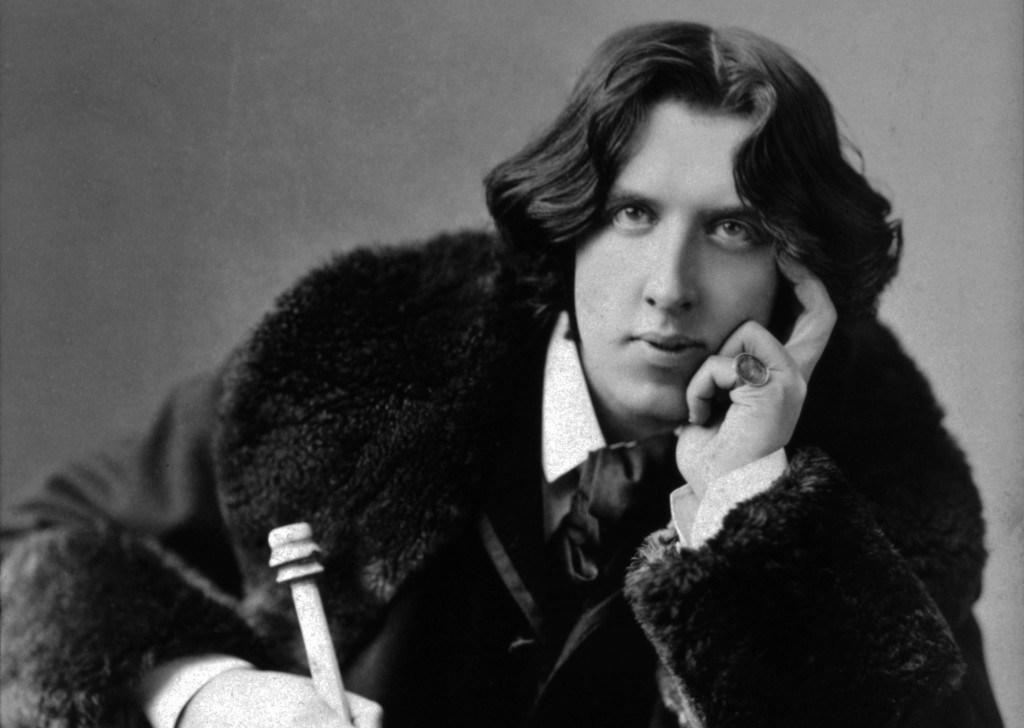 For our 2015 Newsletter, Professor Jos Lavery taught English 165: Oscar Wilde and the Nineteenth Century. In this piece, Jos talks about teaching the Wildean epigram.

The background of my Twitter account is a screen-cap of a slogan posted by the moderator (and who is that, exactly?) of the Oscar Wilde Facebook page. It reads, “You can never be overdressed or overeducated – Oscar Wilde.”

Of course you can, as Wilde well knew – especially, one imagines, when he wrote in his “Phrases and Philosophies for the Use of the Young” that “the only way to atone for being occasionally a little overdressed is by being always absolutely overeducated.” Emphasis mine, obviously. Far be it from me to complain that the Faceless bureaucrat managing Wilde’s postmortem social media platform routinely bowdlerizes the great epigrammatist’s zingers. He was hardly above doing so himself: the line in “Phrases and Philosophies” reappears in a slightly more boring form in The Importance of Being Earnest – he constantly recycles old material – and, if the testimonies of his friends Amy Levy and Max Beerbohm, or his enemy J. A. M. Whistler, are anything to go by, many of his gags were ‘borrowed’ from his witty acquaintances in the first place. More interesting, I think, is the strange function of the name “Oscar Wilde” on the Internet. He may be the unacknowledged genius of Twitter itself, but he is the all-too-often acknowledged “God” and “Founder” of Uncyclopedia, an unfunny meme-aggregator that places his moniker after any old piece-of-garbage joke. It’s a kind of reverse bathos: look, my joke isn’t funny, but if I claim that Wilde said it, its very unfunniness operates as a critique of the cultural capital that the name supposedly comports. Lazy. But, I’m forced to concede, not altogether un-Wildean.

One consequence is that it can be difficult for students to know which of the epigrams they have heard attributed to Wilde are authentic, and which bogus. My contention that the line should be blurred anyway doesn’t help matters. Many students have told me, sometimes quite late into English 165 (my Special Topics course on Wilde), that their favorite Wildean line is “Everything in the world is about sex, except sex, which is about power.” He definitely didn’t say that. Or did he? It’s a trivial and annoying quip: dear fake-Wilde, please disaggregate “sex” from “power” and then let’s try to work out what the word “about” means. But insofar as it banalizes not Wilde but his sometime contemporary Sigmund Freud, it reinforces one of the major claims I promote in English 165: that Freud and Wilde need each other to make sense. So: grudging thanks, I suppose. Even the dumb versions are twinned.

At the end of the class, I asked students to write an epigram of their own, which would be worth something terrifying like 30% of their course grade. I was almost as scared as they were. The students had learned about Wildean inversion (and theorized it up the wazoo with Jonathan Dollimore, Amanda Anderson, Alan Sinfield, and Eve Sedgwick); they had played about with his litotes, his copula, his asyndeton, and his praeteritio. They had heard me declaim that “Oscar Wilde” is a function of discourse, no less than an historical person; that they could therefore – in principle – use his signature if they understood the stylistic practices properly. (Wilde, I’m sure, wouldn’t object. Some of my more pragmatic students found the idea absurd.) But they hadn’t come along expecting to reproduce Wildean texts. They reflexively believed (contra the author of “The Critic as Artist”) that critical and creative writing were as chalk and cheese: and not in the sense that both are generally crumbly, often used by hand, and never available in sufficient quantity. Most worryingly for me, as a teacher, I had no idea whether the “good” ones would be noticeably better than the “bad” ones. Sometimes I’m concerned that I design student assignments in order to award as many A-grades as possible. Shirking responsibility. Also not entirely un-Wildean, come to think of it.

But there was a point to it. We too quickly associate length with seriousness: higher-level courses tend to have longer essay assignments. Why is that? I wanted the students of English 165 to learn how to condense, epitomize, prioritize. These are among the virtues that Wilde tried to teach his contemporaries, with some posthumous success (e.g., modernism). They are perhaps still more pressing in our age of haiku-like utterances; “tweets” and “posts” and –gramma demanding to be read as “insta.” We annotate the passing scene in epigrams anyway. Wilde might be able to teach us how to do so more beautifully, more precisely, and more authentically.

Here are some of the epigrams produced by the students of English 165, Spring 2014. I am extremely proud of them, and I hope their authors are too. (Oh, and one of them is by Wilde himself: do be a sport and try not to guess.)

Epigrams from English 165
(and one from Oscar Wilde)

The beauty of Sorrow is that it doesn’t degrade into Fact.

In examinations the foolish ask questions that the wise cannot answer.

The actor’s charge is to conceal the artifice of Life behind the truth of Art. Life, nonetheless, is usually found out. Only in death can the actor be truly artistic.

In the end, the artificial Diva loses her ephemeral luster. It is the Aunt who is the perfect type of a perfect woman.

In truth, all art is gay art. Desire for the opposite sex is by nature unaesthetic – it is a narcissism blind to its own Beauty.

A reader only reads what he brings to the book. A writer constantly learns he was wrong.