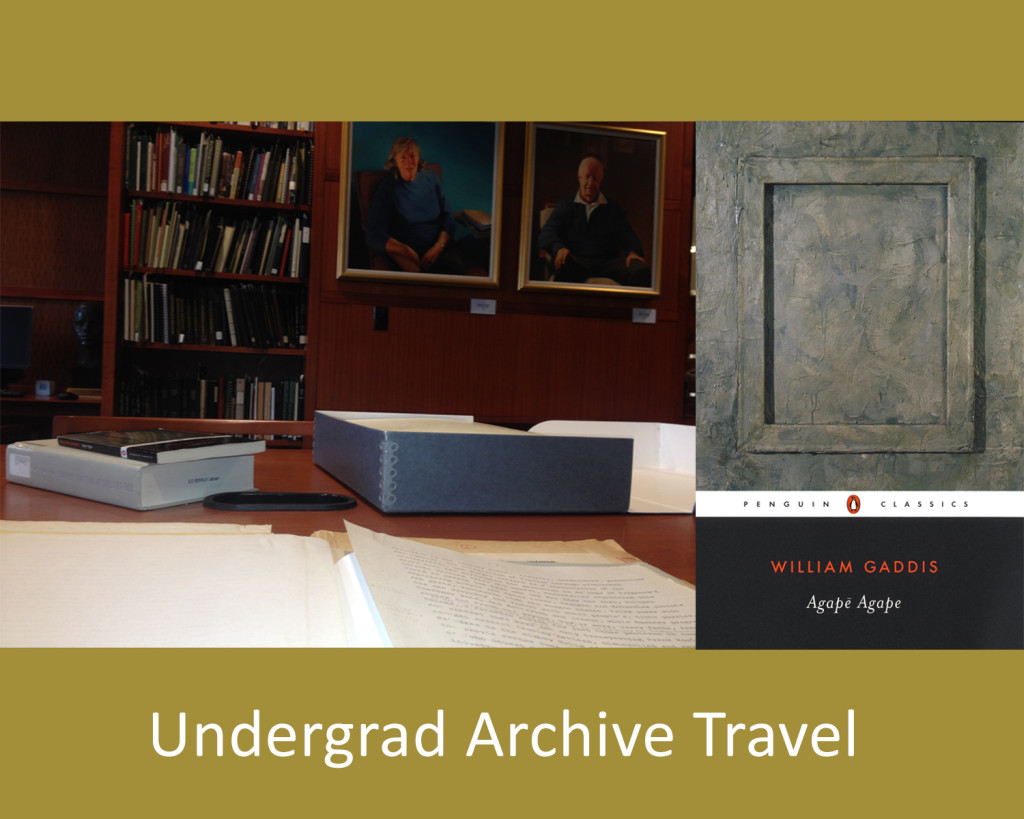 What follows is Keanu’s reflection on his summer of research.

On a summer evening a few weeks before I began my first classes at UC Berkeley, I opened a small, almost pamphlet-sized book titled Agapē Agape. I neither knew the meaning of the title nor recognized its author, William Gaddis. Several hours later, I had devoured its 96 pages and finished my first read-through of the novella. Whether due to its focus on the depersonalization that results from the use of mechanical reproduction in society and the arts, or to its dying narrator who feels estranged from his own thoughts and limbs as he speaks, Agapē Agape gripped me then, and has lingered with me throughout my time in Berkeley.

I only learned later — around the time I decided to center my senior thesis around the novella — that Gaddis had been planning this work, in its various manifestations, for almost fifty years. Having discovered that Gaddis’s papers were housed at Washington University in St. Louis (where his close friend William Gass taught for many decades), I decided to visit his archive and peruse the drafts of Agapē Agape. Yet I was unprepared for the at once daunting and exciting amount of ideas that surfaced when I saw how passages in the novella evolved over time. Remnants of King Lear in the published work — a narrator who divides his property to his three daughters, for example — translated into boxes of handwritten notes detailing plans to incorporate the play’s entire cast into the novella. A few references in literature on Agapē Agape to Martin S. Dworkin, a long-time friend and mentor of Gaddis, did not prepare me for the initials ‘MSD’ that Gaddis wrote throughout his drafts and outlines, nor the more explicit references to Dworkin in Gaddis’ later drafts. The Gaddis Literary Estate at the University of Washington is rich in material, and has helped me grow more familiar with the cryptic and disorienting narration of Agapē Agape.

It was equally satisfying to study how Gaddis patched together the novella. I say ‘patched’ intentionally and with admiration – Gaddis glued cut-outs from newspapers, novels, and his own typewritten drafts onto larger sheets of paper, which he then covered with additional notes. Several topics that Gaddis underlined and annotated in the newspaper clippings, such as Nietzsche’s final years or the word Torschlusspanik (German for ‘gate-shut panic,’ or fear of time running out), are thematically essential in the final novella. For Gaddis, writing was tactile; it is telling that the only physical events in Agapē Agape either affect or involve writing materials – the narrator finds and then loses his pencil, spills water on financial documents, and tips over a stack of books and notes. Leafing through boxes of drafts, I got a small taste of the sensory bouquet that enfolds the narrator of Agapē Agape.

In particular, this visit has helped me understand the narrator’s mode of address: how he speaks both to an ambiguous ‘you’ who pervades the text and to a “Self who could do more” (and whose death the narrator stages as the result of mechanization). I have been able to confirm moments when the ‘you’ refers to an off-stage Fool or Cordelia figure, and have also spotted an intriguing passage in which the narrator relates the “Self who could do more” to a mentor figure. The former point will allow me to analyze what role the reader fills when she identifies with the narrator’s ‘you,’ and the latter will help me parse out how the narrator mourns this “Self who could do more” throughout the novella. Is the “Self,” as the drafts suggest, constructed in part from fragments of the Martin Dworkin that Gaddis describes in his drafts and letters? If so, what might be the effects of an act of mourning that covers up the human traces of its object?

I hope to work through the above questions in detail this semester in my thesis, which examines the relationship between narrative structure and mourning in Agapē Agape. I am sure the drafts will give rise to further questions while I write my thesis, but look forward to exploring a dynamic that’s at the heart of the novella: why, on the one hand, the narrator strains to show that the “Self who could do more” is dead while, on the other, he laments this loss.