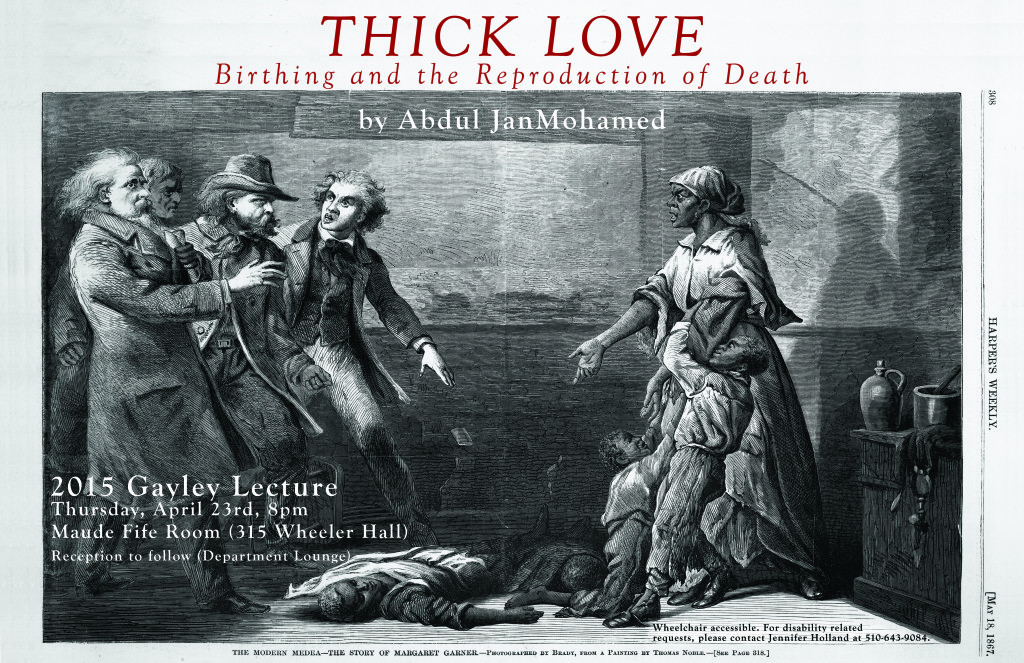 Tomorrow, English Department students, faculty, and alumni will crowd into the Maude Fife Room on the third floor of Wheeler Hall for the annual Charles Mills Gayley lecture, the department’s highest honor. The 2016 lecture, “Historicism: a Eulogy,” will be given by Professor Steven Justice and will begin at 7:00pm.

On the eve of this occasion, we thought we would look to the past and revisit last year’s lecture. In 2015, Professor Abdul JanMohamed presented his lecture, “Thick Love: Birthing and the Reproduction of Death,” to a packed audience.  The lecture, devoted primarily to Toni Morrison’s Beloved, was drawn from a larger study examining the predicament of the slave mother who is obliged to bring life into a world that will immediately (re)form that life as death-bound-subjectivity. The slave mother is forced to produce an impossible possibility, to produce life and death at once.

Below you will find an abbreviated abstract for the talk. If you’d like to read the lecture in whole, you can do so by clicking here.

Thick Love: Birthing and the Reproduction of Death

My analysis of the political deployment of death in my last book, The Death-Bound-Subject, was restricted to the viewpoint of an individual heteronormative male subject, namely Richard Wright, who does not feel burdened to keep a family together. In fact, most of Wright’s fiction is unconsciously dedicated to the shredding of family ties. His notion of the male slave is in some respects close to Frederick Douglass’ conception of himself as a putatively self-sufficient individual struggling against the master. However, the battle to the death between Douglass and Covey seems romantically luxurious from a maternal viewpoint. Consider very briefly Harriet Jacobs’ perspective. Her protagonist, Linda Brent, uses her biological capacity of impregnation and maternity as a political weapon to protect herself from the master’s lascivious reach, and Jacobs also deploys the prevailing trope of maternity very effectively in the literary construction of her autobiographical novel.   But maternity is both a weapon and a liability for Jacobs. In the prolonged struggle against her master she makes it quite clear that she, like Douglass, would prefer death over slavery if she did not feel obliged to care for her children. Her maternal status requires a significantly different approach to death. Her seven-year sojourn in the garret of her grandmother’s house – a period during which she experiences the severest form of social death and several times comes very close to actual death – is, in my view, the maternal equivalent of the two-hour battle between Douglass and Covey. One of the fundamental differences between the masculine and the maternal consciousness of the dialectics of death is best captured by Jacobs’ feelings when her son is recovering from a serious, potentially deadly illness.

As the months passed on, my boy improved in health . . . I loved to watch his infant slumbers; but always there was a dark cloud over my enjoyment. I could never forget that he was a slave. Sometimes I wished that he might die in infancy . . . Alas, what mockery it is for a slave mother to try to pray back her dying child to life! Death is better than slavery. (62)

In short, this conflict between the simultaneous desire for life and for death renders the maternal site the most complicated and aporetic of all the subject-positions under slavery – it is indeed the site of impossible possibilities.

Regarding maternity I would like to begin by acknowledging the obvious fact that it is a vast and complex subject that has received enormous scrutiny recently, and I am not going to engage the bulk of that scholarship tonight. Instead I will be concerned solely with maternity under slavery as a formation that is penetrated by the master’s deployment of death, as a site occupied by a fundamental struggle between life and death, between eros and thanatos.   As Jennifer Morgan, Dorothy Roberts, and others have pointed out, the master is capable of seeing the birth of a child almost solely as an augmentation of his productive apparatuses. By contrast, for the slave mother, as for all mothers, that birth is a utopian moment, in principle full of boundless love and infinite possibilities. But we must also acknowledge that this moment of utopian potentiality conflicts with the unconscious tendency that allows bio-cultural reproduction to take place without significantly altering the prevailing social relations of production. In the vast amount of fascinating work done on the concept, structure, and function of mothering and birthing, there are two strands of thought that I find most useful for interrogating biological and cultural reproduction under slavery. The first is a line of phenomenological thinking best represented by the recent Levinasian theorization of critics such as Anne O’Bryan and Lisa Guenther. The second strand consists of the Marxian analysis of critics such as Leopoldina Fortunati, Silvia Federici, and above all Mary O’Brien’s work on the “dialectics of reproduction.” O’Brian articulates a rigorous dialogue between the Marxian theorization of the “reproduction of social relations of production” and the traditional view of this issue, which sees matters of biological and cultural reproduction as belonging to the realm of “natural” rather than social reproduction. Lisa Guenther theorizes the child as “gift”: one’s own birth, she says, is “a generosity that gives me and is given to me” and, looking forward to the act of birthing, the arrival of the child she views as the “giving of a gift that keeps giving.” Considering the child as a gift allows us to understand, according to Guenther, that both the receiving and giving of that gift entail a radical responsibility for the Other. This gift is “neither circular nor linear” but rather discontinuous; she calls the giving and receiving “an open circuit” that interrupts the phallocentric economic circle of “possession, dispossession, and equivalent compensation,” proving to be the gift that Derrida thought impossible to achieve. Morrison diegetically theorizes the same political economy from the slave master’s viewpoint. When Paul D compares Sethe’s value to his own (he cost the master $900), he realizes that her value is infinitely higher than his because she is “property that can reproduce itself without cost.”

Thus under slavery the maternal site becomes a war zone traversed by a murderous struggle between the mother and the master. What the mother sees as a gift, the master sees as a commodity. Consequently, the maternal site also becomes a transformative matrix, one in which the mother either “allows” her child to be defined and appropriated as commodity or she adamantly resists that attempt, even when infanticide remains the only viable mode of resistance. In his commentary on Hegel’s master-slave dialectic, A. Kojeve insists that this struggle is the moment of anthropogenesis – that is, of the birth of the human as a self-conscious species. If so, then every maternal site under slavery consists of a battle over anthropogenesis. From the master’s viewpoint the slave is what Agamben defines as “bare life,” that is, a putatively human life that can be killed without that murder being considered either a sacrilege or a homicide. The slave is thus suspended from the moment of birth between the realms of the divine, the human, and the animal. Against this, Toni Morrison explores the slave mother’s insistence that her child be defined as human. Thus under slavery the maternal site is one in which two radically different political economies compete for dominance.