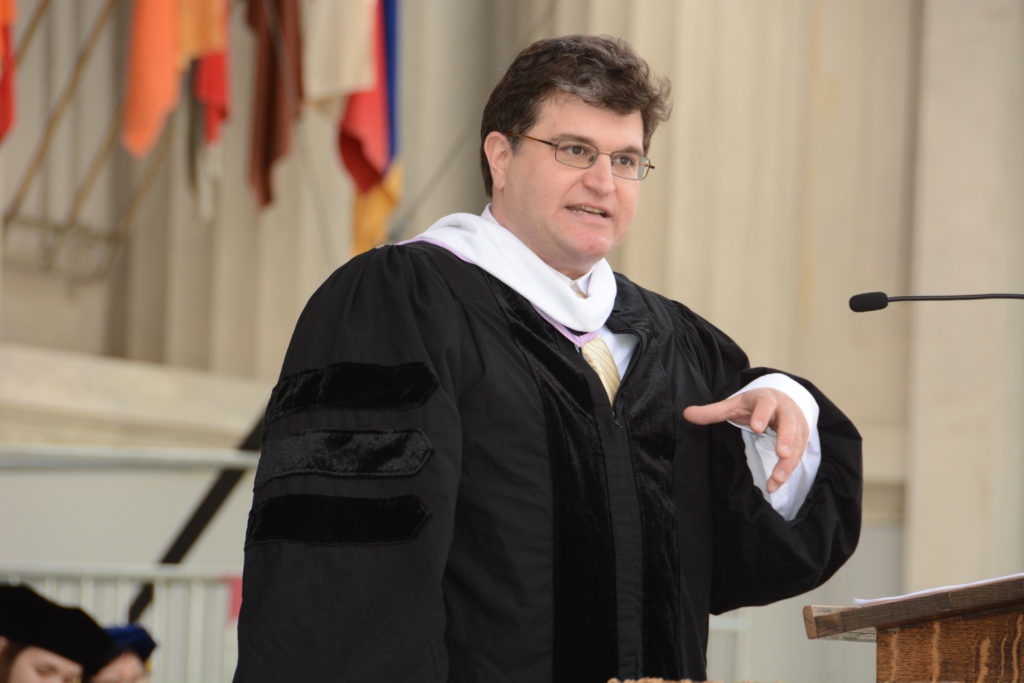 The following speech was given by Professor Eric Falci to the graduates of the English Department of the University of California, Berkeley, at their Commencement, on Saturday, May 21st, 2016.  Professor Falci has published two books, one on contemporary Irish poetry, Continuity and Change in Irish Poetry, 1966-2010 in 2012 (Cambridge University Press,) and The Cambridge Introduction to British Poetry, 1945-2010 in 2015; he is currently working on a third book project, tentatively titled Poetry’s Musics, on the conjunctions and disjunctions between poetry and music in 19th- and 20th-century British and Irish literature.   Professor Falci holds a Ph.D. from the Graduate Center of the City University of New York (May 2006.)

When Professor Padilla and I sat down in his office and he asked me about giving an address at commencement, he mentioned that something around a 10-15 minute talk would be ideal. At which point, 2 thoughts began to develop in my head. As any good English major type would, I did a quick calculation—okay, 10-15 minutes, that’ll be something around 5-7 double spaced pages. Fair enough. Then I realized: oh god, a 5-7 page paper. I’ll be delivering a 5-7 page paper to the graduating seniors, many of whom I’ve assigned 5-7 page papers in the past, often in the very, very recent past. In English 45C or 180L or 134 or 170. Karma is really something. What goes around…indeed. And then, another thought hit me, one that was perhaps more terrifying: I will be delivering a 5-7 page paper to the graduating seniors, the newly minted PhDs, all of your families and friends, and…my colleagues. Who will be sitting behind me, watching. I imagined myself as a kind of Olympic figure skater (okay, well some other sport) and an array of international professor-judges behind me holding up scorecards to signal how the speech was going. C, B, A-, F+, disqualified. Unfortunately, these thoughts didn’t fully take shape until about 10 minutes after I left Genaro’s office, having already agreed to speak today. So, here we are.

I guess I should say at the outset that if this speech were indeed to be thought of as a 5-7 page paper, it would be a pretty bad one. There’s really not a thesis statement anywhere to be found. There are a number of places in which I’ve written “awk.” in the margins. I blatantly overuse the first person singular pronoun. There’s very little textual evidence adduced for any claims that I make…and the transitions are unbelievably rocky.

The first thing that I’d like to do is to congratulate all of the graduating seniors and the new doctors of philosophy. Congratulations for completing your degrees with distinction. For persevering through the rigors of 45A, and 45B, and 45C, and the research seminar, and the honors thesis; and orals exams, and language exams, and your dissertations—all while living complex lives, with other courses and responsibilities, often while working in other jobs, and taking care of your families. What you’ve each done is significant. And what you’ve all done matters. So, firstly: many congratulations to every one of you.

Before I talk briefly about what I’m going to talk about, I want to talk for a moment about a topic that I’m not going to talk about. One hears and reads—nearly incessantly—about the crisis of the humanities or—more fatefully—of its demise; about the need to justify English departments or Art History departments or Philosophy departments; or the need to explain what you’re going to “do” with such a major. As though any one “does” something with a “major,” in the way that one “does something” with a lawnmower or a frisbee.

You’ve all heard this; at some point in your time here, someone—maybe from EECS or Haas—has engaged you in a spirited discussion on such a topic. And so, we, of course, want and need to defend the humanities and the English major specifically. But I’m done justifying it. It needs none. Every culture that we know about in the history of the world has had poets, and singers, and storytellers—those who have fashioned words to help explain ourselves to ourselves, to recollect the past, guess at the future, and understand the present; to try and say what it is that we think and know and feel, and to try and get a bead on what we don’t; to articulate the world and our places in it. The platforms will change—vellum, parchment, print, pixel—and the shapes will morph. But we are creatures of language. Creatures in language. And literature—which seems to be a remarkably capacious term, poem and novel, play and screenplay, blog and essay, video game and tweet—literature might simply be a term for those fashionings, those constructions of words and ideas, that continue to speak to us and to move us and to present the full complexity of the complex world. To be sure, the humanities, the English major, needs defending. But, not justification.

If we give up on reading closely and deeply those superlative artifacts of language, whose creatures we are, then we’ve given up too much. If we imagine that our world is one in which big data and binary alone matter, then we’ve stopped imagining. So, I’m not going to spin another variation on the “justify-the-humanities” theme (although, of course, I guess I have tried to do just that, and will probably continue to do just that). In any case, on to the next topic. (I warned you that the transitions are shoddy).

Part of the trick of the English major is that it so fully instantiates one of its key terms. I was cleaning out and packing my office last week—as you know, the English department is leaving Wheeler Hall, just for the year, so that it can undergo some needed refurbishments, and so the English department along with all of the occupants of Wheeler are being relocated somewhere out past Tatooine, I think. (You’ve all chosen an auspicious moment to graduate.) So, I was packing my office and came across a letter from a student who took the very first class that I taught at Berkeley in 2006—English 134. She said that she learned—among other things, I hope to god—that literature is very often, and almost always, ambiguous. I re-read the letter, and thought back over the classes I’ve taught the past ten years, and said to myself, “crap, maybe that’s all I teach”—that every text’s ambiguous, that every line of poetry might mean several things at once, that novels seem to generate meanings ceaselessly, that interpretation just keeps going.   This is the kind of stuff that drives some people nuts about literature, about art—why is everything always so ambiguous? Why does every text have multiple meanings, and why does every last English professor want to point out each one without resolving them? It sometimes drives us nuts too. Isn’t this why STEM folks think we’re less rigorous than they are? Because we always find some other out-of-the-way interpretation to latch onto, and go googly-eyed at how a poem or a novel can hold multiple, incompatible meanings within itself without any irritable reaching after a single solution—a right answer? Is that what we are—connoisseurs of ambiguity, of undecidability, of not choosing—negatively capable souls who have, as John Ashbery writes, raised “fence-sitting” to “the level of an esthetic ideal”? Is ambiguity an English major’s infernal and everlasting bugaboo?

No, it’s not. It’s not necessarily the case that ambiguity is a negative word—although it is sometimes used in such a way. There may be a handful of absolutes. A very small handful. A finger and thumb full. A thimble full. But most of the world and much of our lives are murky—both not entirely clear and going in several directions at once. To paraphrase one portion of the OED definition of the word, this is simply to say that most things admit “more than one interpretation, or explanation” and have double meanings or “several possible meanings.” If we look as deeply as we can at something—some issue, some topic, some idea, some text—then we’ll usually find that we are of at least two minds about it. Ambiguity may well be our oxygen.

The English major itself is ambiguous. And this is all to the good. When we tend to list the careers that Berkeley English majors have gone on to, it is, to be sure, an impressive list. But, it’s also a wonderfully ambiguous one. Berkeley English majors, just from the past handful of years and just going by students who I’ve kept in touch with, are now lawyers, doctors, actors, choreographers, political operatives, nurses, teachers, graduate students, writers, musicians, Googlers. It’s not an ambiguous major because it’s vague or unclear, but because it means multiple things at once, and my hope is that each of you will make it mean lots of different things over the course of your lives and careers.

In fact, there may be no better preparation for this particular moment in your lives than being an English major. My guess is that each of you feels, right about now, ambiguous. You each give off multiple, perhaps incompatible meanings; excited and wary, nervous and thrilled, happy to be done and perhaps unhappy to leave, ready for the next phase and perhaps unsure of what that phase will be. I can’t stand here and say that everything will soon be clear and straightforward. But, if we grant the premise that much of the world, and a good bit of life, is indeed ambiguous, and go on to suggest that one of the key aspects of literature is that it affords us a way to think through ambiguity, multiplicity, possibility—then having finished your degree in English means that you are uniquely suited to wrangle with the inevitable ambiguity of our lives in the world—to watch it unfold, to track its movements, to consider its effects. To take part in the crucial work of the world that needs to be done.

You all have vital parts to play and important contributions to make. It’s okay that you might not know exactly how those parts are going to play out, or that you might not be able to see the future as some crystal clear path in front of you. The future doesn’t ever appear so clearly—neither does the present (and perhaps the past least of all). Both present and future tend to be…ambiguous—and, as such, you are all entirely ready for them.

Finally, I’d like to say thank you, from myself, but also on behalf of my colleagues in the English department. You are all the beating heart of this entire enterprise. There are a number of great things about working on this campus—but more than anything else, I love teaching here. You are all fiercely intelligent; you think deeply and you work hard; you take risks and jump into texts and ideas with intensity and keen-ness; you make this place what it is, and I want to thank you for spending so much of your time over the last several years around Wheeler Hall. It’s been a pleasure to get to know you and a privilege to work with you. Thank you. And congratulations to you all.