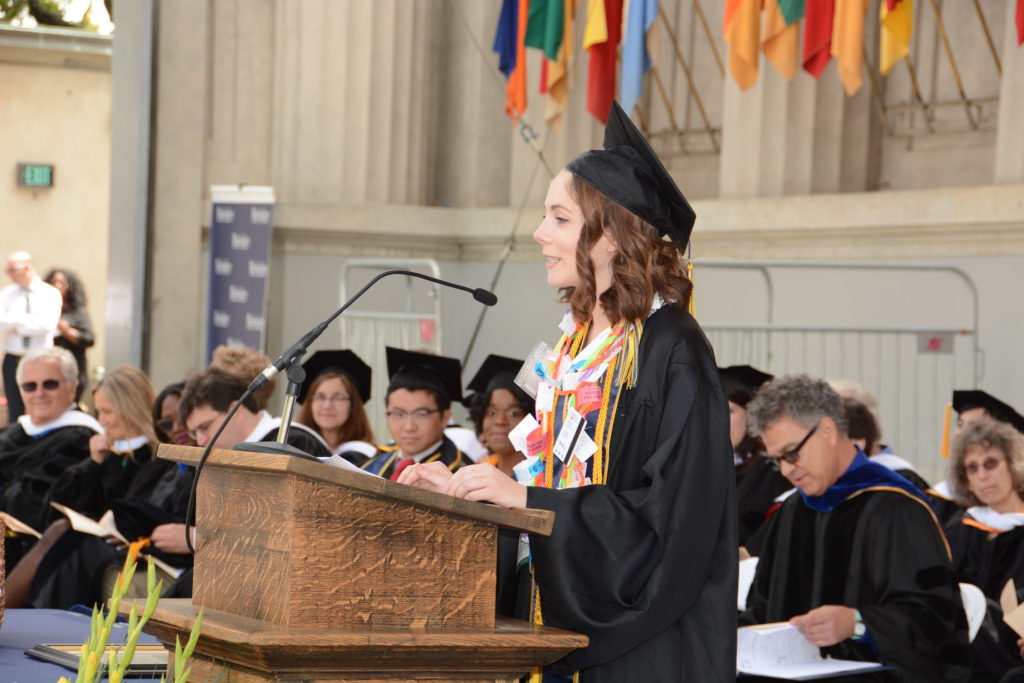 Each year, the Department Citation is awarded to one outstanding graduating senior who is recognized by faculty nomination as having produced exceptionally high caliber work as an English Major. The following speech was given by this year’s winner, Maris Emily Dyer, at the department’s May graduation ceremony on May 23rd, 2016.

Hi, Class of 2016. Wow. I can’t believe I’m here talking to you today—I don’t think I’ve ever been so honored and terrified in my life. Terrified, because I know after Sheryl Sandberg’s speech last Saturday, my speech is going to seem pretty lame in comparison. But, as my dad helpfully reminded me, this isn’t going to be live-streamed to Facebook, so the stakes are a little less high. I’ve also been told that last year the student speaker literally wrote his entire speech as an elegy in the style of Milton, invoking the Berkeley muses to guide his pen as he referenced Faulkner and Eliot: even at graduation, Berkeley students keep making insane standards. Well, sorry to disappoint, but for all you out there scanning this speech automatically in your head, you already know I’m not writing this in blank verse.

I’m so honored to be here because this department has honestly changed my life, or, perhaps, given me the tools to make my life what I want it to be. When I came to UC Berkeley, I was 17 and I was from a town in the middle of nowhere in Northern California called Shingle Springs. At my high school, kids rode tractors to school in the mornings and Future Farmers of America was the cool student organization to join. I did not fit in. I was a dorky kid that really loved books and dreamed about living elsewhere, anywhere, with people who got me, who wanted to talk about literature and music and art and culture. When I was 13, my parents took me to see an Alison Krauss concert on this very stage at the Greek Theater. I was so in awe of Telegraph Avenue, Doe Library, the view of the Golden Gate Bridge from the Campanile on a clear day, how many flyers for different clubs I could collect in a single walk across Sproul Plaza—back then, I was begging them to give me a flyer instead of concocting elaborate schemes to avoid them. I knew that I had to come here for college. It just felt right.

And when I came to Cal, I did find people who got me. I found those people everywhere at UC Berkeley, not just in the English major, but I only found myself by studying literature in this department. As a freshman, I was so scared of getting lost among the many talented people at this very large, intimidating public university. I wasn’t in Shingle Springs anymore. My friends who study science would come back to the dorms talking about how they had gone to their Bio 1B class late and there weren’t any seats left because there were so many students, so they had to go to an “overflow room” where they then Skyped in to listen to the lecture. In this department, that just wasn’t the case. Here, I found professors who were always at office hours, GSIs who patiently taught me the difference between parataxis and hypotaxis—although I tried to explain this to my friends when I was practicing this speech and I think I still need a refresher—and fellow students who consistently challenged each other to be better in constructive and positive ways.

The professors here are not only some of the most intimidating and smart people I’ve met at Cal, but also the most kind and empathetic. Professor Falci, who’s speaking today, remembered me after meeting me once at a department event in the first month of school and would cheerfully greet me by name every time he saw me in the halls of Wheeler afterwards. Also, side note, rest in peace Wheeler. It’s getting renovated next year and I know we’ll all miss occupying your hallowed halls. The other day, I saw one of my friends sitting out on Sproul. She looked like she had been crying. I asked her what was wrong, thinking it might be the usual things—you know, rough midterm, bad essay, randomly remembering, as I often do, that the Golden Bear Cafe no longer sells chicken strips—but instead, she said: “I just came out of Professor Arnold’s lecture about Cleopatra in Shakespeare and you know, it was so beautiful. I think the GSIs were crying too.” I immediately remembered what lecture she was talking about. During the Ferguson protests, it was only in Professor Saha’s class that we set aside our lecture for the day and talked candidly about anger, privilege, and the Black Lives Matter movement. My other classes that day ignored what was going on around us. There are so many other professors I could thank here specifically for helping me these past four years, you all know who you are and how much I appreciate you. Your acts of kindness and wisdom that went above and beyond what is expected from a professor here are what I remember most clearly from my undergraduate experience.

I think, sometimes, when I retell these moments of connection in the English Department, that people mistake my anecdotes as signs of the English major’s easiness. Any of you sitting here today knows that this is so far from the truth. From learning how to read Middle English in the pre-1800s requirement to writing 18 pages of critical, original analysis in one night because you really procrastinated on your paper for your research seminar to reading a book, or maybe two, in a day, the English major at UC Berkeley is not easy. And I’ve also found that the people who choose to study English, despite the social stigma that’s often attached to this major and that most of us suffer through when we go home for major holidays—“Oh, so you want to become a teacher?” “How are you going to get a job with that?” “Isn’t your major something you can do for fun in your free time?”—are also the people that are the most ambitious and driven. Because we have to justify our beliefs and our passions constantly, especially in this part of the world that is so focused on tech, we have to be able to articulate precisely what we want.

Looking out at this class, I see so many people who I admire, people that are as idiosyncratic and interesting as the characters we read in novels for class. There are Daily Cal columnists I read religiously, the leader of the Student Advocate office, someone with a tattoo of Oscar Wilde’s cell number on her arm—it’s C33, for those of you wondering—poets and authors, co-op presidents, editors, teachers, some of you heading for Masters and PhD programs and medical school and the Peace Corps, fellow thesis writers—and to quote Sheryl, that’s just the women. I am so privileged to call many of you my friends.

I can only hope that in the future, I meet the same type of wonderful individuals who want, as Thoreau once said, to “live deep and suck out all the marrow of life.” I’ve learned a lot from the authors I’ve read in my past four years here: Chaucer showed me that it’s always the one that you don’t expect that comes up with the raunchiest tale when you’re going on pilgrimage, Milton taught me that hanging out with the Devil is usually more fun than God, Melville reminded me that if I ever develop a monomaniacal obsession with a whale, I should probably take a step back and reevaluate before things go too far—but I’ve learned so much more from the professors and students here who have made Wheeler Department my soon-to-be-retrofitted home.

It’s one thing to memorize dates and endless quotations so you can identify them on midterms, which we’ve all dutifully done; it’s another to make people feel like they have worth as human beings. I hope that as this class goes out into the world, we continue to remember people’s names, to look for beauty in the details, to ask someone to tell us their story. These are the abstract, indefinable things that are the most difficult to teach in the classroom. Some might scoff and think those skills aren’t exactly lucrative, but when I think about the people who stand out most clearly to me as thinkers, artists, and innovators in the past four years, I remember the ones who were not only smart, but who were also tolerant of people from different backgrounds, spoke their minds clearly, and treated others with compassion and respect. Those lessons are ones that we learn from the books that we read and the essays we write, but this department truly puts them into practice. I can only hope that I will find and contribute to a community like this one after college as well.

Thanks to my beautiful friends, family, and boyfriend on FaceTime who are sitting through this long graduation. Thanks to my incredible parents, who never questioned my decision to become an English major, but always inspired me to do my best. Thanks to my amazing student job at Cal Performances for running this show, and thanks, so much, to all of you. So, I know this hasn’t been as good as an elegy in the style of Milton, but I did manage to come up with a simple haiku to commemorate our time here:

We did it, go bears