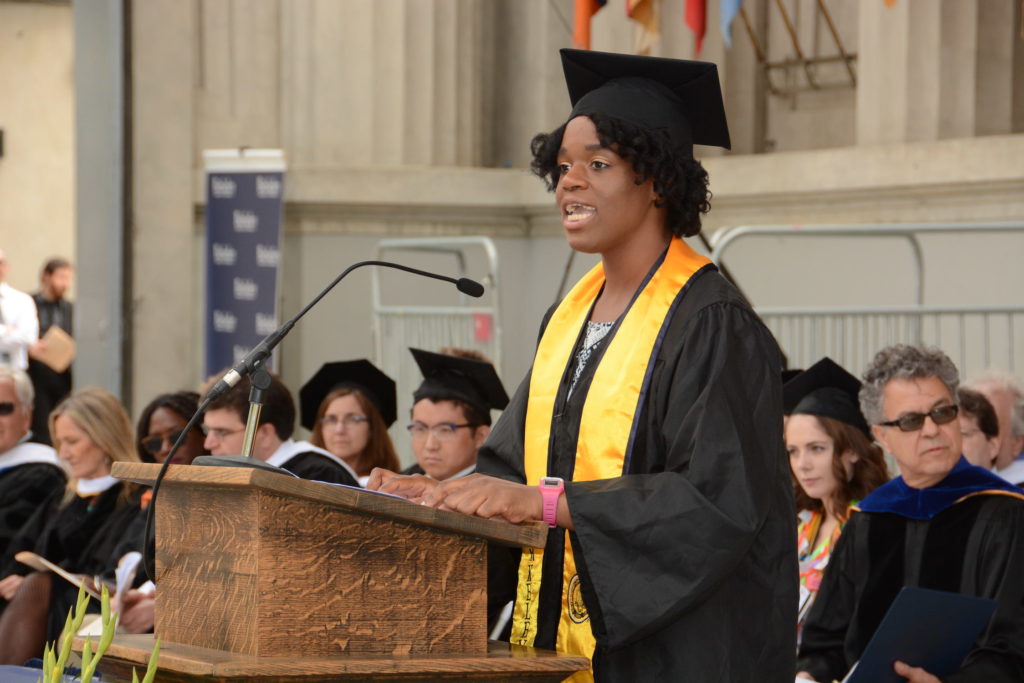 Chocquida Roekell Robins (’16) was chosen to speak at the English Department’s 2016 Commencement Ceremony on May 21st, 2016.  What follows is the text of her address, titled “Granite.”

As a child I wanted to learn how to compare my life to granite––the falling grains of construction. The deconstruction of things that coalesce into something beautiful.

I watched pebbles on concrete,

drops of mercury from a broken kitchen thermometer

landing against the conformist beige of a kitchen floor.

I wanted to envelope and condense my world into my diaries…to learn why I was deeply moved by Dickinson’s “I’m nobody! Who are you?” Reading became a thing of pleasure and writing an effort to mitigate pieces of myself into left margin words on a page. As a teenager books and blank pages became a means to understand the cataclysm of my race and gender in a world where my personage grated against the ideologies of those I couldn’t change, but wanted to understand…why? I wanted to deconstruct those things.

There isn’t enough time for an autobiography or a decomposition of my childhood spent both in Oakland and Sacramento California, but what I will say is this: I have always wanted to be a student at UC Berkeley, since I laid eyes on the campus at the age of eleven. I didn’t know how prestigious this institution was, just that it felt right. The buildings felt as disjointed as I did. Buildings striving for a unity with their surroundings, yet grating against the grain of it. The fact that the city was always referred to as “Berserkly,” by my parents helped too. As an adult—soon to be an Alumni of UC Berkeley— I have finally managed to unbraid that condensed-magnetized-attraction into meaning: This institution—more importantly the English Department— siren calls out to people who are seduced by the unknown, people who chase knowledge because uncertainty has always chased them.

As a UC Berkeley English major I’ve learned beauty is a cliché construct to be broken down… so I should write love…shatter it…heart…decompose it…kismet…break it into… two hands, capturing each other…binding and interlocking fingers in the paradox of agreement and disillusionment. And finally when I feel satisfied I should go back to the beginning and consult the OED and review my life choices…choices that feel like comparing my life to granite…the composition of a place, concrete and plaster buildings that house classrooms. Poetry classrooms where I learned how to successfully discuss race and gender because everyone knows it but no one wants to…stay condensed into classrooms of concrete and plaster. As an English Major

Nirvana and purgatory in a library, the excitement at the edge of discovery,

the shaky breakthrough-induced exhale, at the end of a long research project

the mind sedating satisfaction of a coherent thesis

Turning pages in books that turn me,

into something more than, the analytical dancing drone

have majored in the ecstasy of

the ability to mitigate pieces of myself

Into words on a page… I have

I have been condensed into…

The desire of grating against the grain of intellectual conformity,

I have condensed myself into meaning.

We have condensed ourselves into meaning.