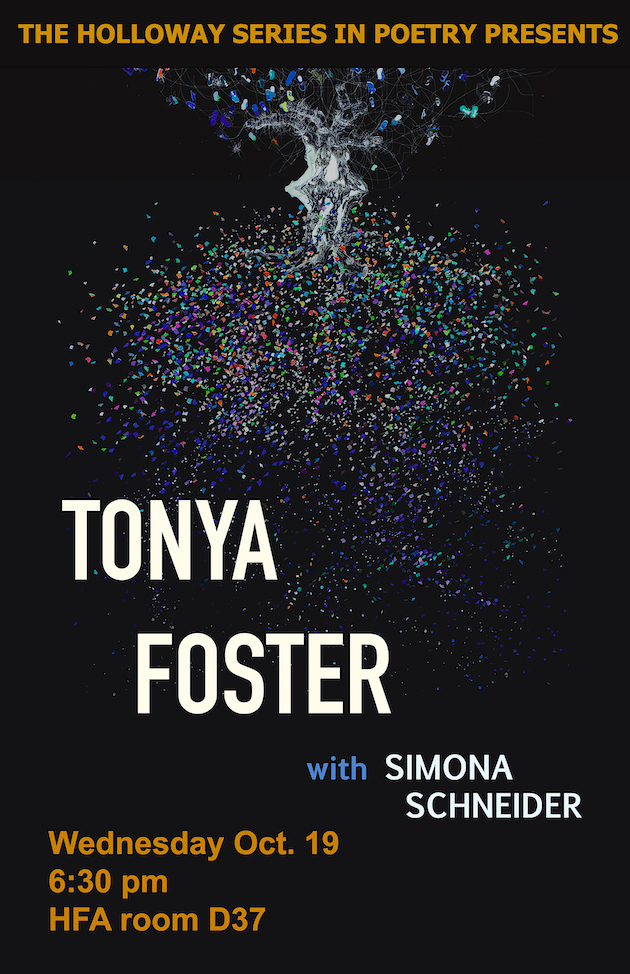 Each academic year, The English Department’s Holloway Series in Poetry welcomes several renowned and rising contemporary poets to campus to share and celebrate their work.
This week, the series welcomes Bay Area poet Tonya Foster. Tonya Foster teaches at the California College for the Arts in San Francisco.  Her book, A Swarm of Bees in High Court, was published last year. “In Tongues,” Tonya M. Foster’s poem below, is taken from the Academy of American Poets website; her comment about the poem appears on the same website.

Foster’s reading will be held October 19th at 6:30pm in room D37, Hearst Field Annex.
The event is free and open to the public.

“This poem comes as response to ‘you’re so musical,’ a comment (meant as a compliment) made to me after a reading. That comment seemed to shift focus from the lamentations that were at the heart of the poems to meter. It seemed to empty the poems of context and content. I thought of Frederick Douglass’s observation: ‘I have often been utterly astonished, since I came to the north, to find persons who could speak of the singing, among slaves, as evidence of their contentment and happiness. It is impossible to conceive of a greater mistake….’ The poem comes as a kind of ode to what music may carry and to what may be mis- or unheard.”
—Tonya M. Foster

1.
Because you haven’t spoken
in so long, the tongue stumbles and stutters,
sticks to the roof and floor as if the mouth were just
a house in which it could stagger like a body unto itself.
You once loved a man so tall
sometimes you stood on a chair to kiss him.

3.
It ain’t even morning or early,
though the sun-up says “day,” and you been
staggering lange Zeit gegen a certain
breathless stillness that we can’t but call death.
Though stillness suggests a possibility
of less than dead, of move, of still be.

4.
How that one calling your tryin’
music, calling you sayin’ entertaining, thinks
there’s no then that we, (who den dat we?), remember/
trace in our permutations of say?
What mastadonic presumptions precede and
follow each word, each be, each bitter being?

5.
These yawns into which we enter as into a harbor—
Come. Go. Don’t. says the vocal oceans which usher
each us, so unlike any ship steered or steering into.
A habit of place and placing a body.
Which choruses of limbs and wanting, of limp
linger in each syllabic foot tapping its chronic codes?