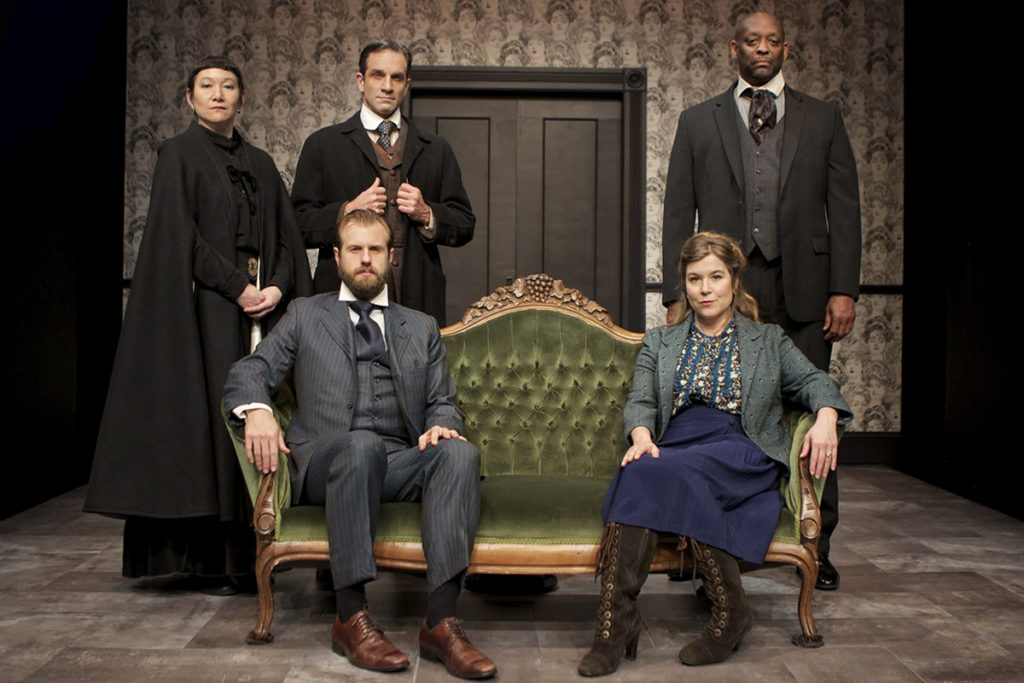 The next piece in the series is a review by C.F.S. Creasy of the Shotgun Player‘s production of Ingmar Berman’s Nora, an interpretation of the classic Ibsen drama, A Doll’s House. Nora is directed by Beth Wilmurt; it is playing until April 23rd.

In the program notes to the Shotgun Players’ current production of Nora, Ingmar Bergman’s 1981 pared-down adaptation of Henrik Ibsen’s infamous 1879 problem play A Doll’s House, director Beth Wilmurt remarks that “Before the 2016 election, I assumed this was going to be a production that celebrated Hillary Clinton breaking the glass ceiling. Then overnight it became about the opposite. Many of us now feel like a stranger in our own land. And people we thought we knew are suddenly strangers too.”

It is probably inevitable that an American production, in 2017, of a play built around questioning oppressive gender dynamics should call up associations with the current political climate and the misogyny that saturates it. Moreover, any production of Ibsen’s once-scandalous play has to navigate the question of the relationship between the historical specificity of the problem it sought to describe (Ibsen was always adamant that “I only ask; my call is not to answer”) and the contemporary moment of its staging. The question might be put in strikingly simple terms: who in an audience today is really going to think of Torvald Helmer, Nora’s husband, as a potentially sympathetic character? Who would do anything other than applaud Nora’s decision to leave?

This production’s implicit responses to these questions have both strengths and weaknesses. I think the production’s strengths are its own, while its weaknesses largely derive from its source text—Bergman’s adaptation. For unlike Wilmurt, Bergman has a heavily Strindberg-influenced (if not outright misogynist) sense of the play: in response to an interviewer who cited Strindberg’s view that “she treats him like a doll,” Bergman replies “Yes, of course,” calling Nora’s departure from her prison a gesture of “enormous aggression” and “incredible brutality.” For Bergman, “Helmer as a very nice guy, very responsible.…A Doll’s House is really the tragedy of Helmer. It really is. And it must be made clear that Helmer’s tragedy is fully as interesting as the development of Nora. He’s a decent man who is trapped in his role of being the man, the husband. He tries to play his role as well as he can—because it is the only one he knows and understands.” This view is palpable in his adaptation, which is no mere streamlining or modernizing, but a strongly worded interpretation.

If Bergman’s interpretation seems at loggerheads with the production’s program notes, it is a tension that runs through the production overall. Wilmurt, I think rightly,rejects such reading of Ibsen (although certainly Helmer is not, and should not be played as, simply a “pussy-grabbing” MAGA-hatted cretinous monster), but usingBergman’s adapted text tips the scales toward that reading, giving us a Torvald who often feels the need to strain against his lines. (Gone from the original is agreat deal of what today we might call Torvald’s mansplaining, as well as the bulk of his patronizing pet names for his wife.) Kevin Kemp at times struggles with this,although he manages to hit the character’s ground note with splendid, perfect-pitch clarity by the ending scenes, with his drunkenness after the party and his man-child confusion in the final confrontation with Nora over Krogstad’s letters. Kemp really does some fine work here, as does the whole cast. Indeed, my quibble here is not with the acting, but with the at times slightly incoherent task the actors have to accomplish, given the tendentious adaptation with which they are working.

The major benefit of Bergman’s version for contemporary staging is that it is more digestible, clocking in at an hour and forty-five minutes and lending itself more easily to the black-box staging of the Ashby theatre. But it also cuts out much of the 19th-century detail necessary to making the drama of gender relations intelligible or translatable to other historical moments. In other words, Bergman’s version cuts both too little and too much, making the major plot device of the forged signature feel undermotivated and underexplained—falsely universal—while backing the titular character into a corner wherein she must chew scenery that feels the more dated for being only partly present. Consequently, in the early scenes Jessma Evans’s veneer of cheerfulness occasionally rings false, that is, wrongly false—not as the self-delusion of the doll but as the awkward connivance of a novice manipulator.

But in other ways the production uses this awkwardness to address the issue—of this play’s “problem” seeming dated or untranslatable—much more to its advantage.For instance, while the rest of the reduced cast (Bergman cut the play down to its five main characters: Nora and Torvald Helmer, Dr. Rank, Christine Linde, and Krogstad) are dressed in basic period fashion, Nora is wearing more contemporary clothing (slacks and so on), making the friction between her delegated role as doll-house-wife and her own conscience a matter at once of physical appearance and temporal disconnect. This could seem like awkwardness, but I think the staging makes that a virtue, compounding it in other ways, such as having Nora double as a stagehand by moving the furniture props around the stage as necessary.Here again, the audience is given a visual and metatheatrical staging of how Nora’s labor (emotional and material, actor’s craft and stagecraft) props up the very edifice that constricts her—while Torvald remains offstage and unaware.

The staging in general works to marvelous and subtle effect. As the play progresses, the backdrop of the door between the main room and Torvald’s office (as well as the Helmers’ bedroom) moves forward, until by the end of the play there is not much more than three feet of “stage” left, Torvald’s offstage space having,with thoughtless cruelty, absorbed all the space available to Nora. That final confrontation—which begins with Torvald still hidden behind the backdrop in the marriage bed while Nora stands in the doorway—caps this off powerfully. Another wonderful detail in this respect is Nora’s tarantella practice. In Ibsen’s text, that is a moment when all of the psychological freight under which the heroine is laboring comes to physical expression, Nora dancing with greater and greater frenzy and whirling about the room while her husband for the first time palpably confronts the futility of his attempts to stage-manage her. In the Shotgun Players’ version, a table is set right in front of the upstage doorway (Torvald at one point has to crawl under it in order to make his way to center stage), and Nora’s practice dance is performed on this most minute and most domestic of stages. The tension becomes all the more compelling for being so bottled up. Finally, Maya Linke’s set design underscores these effects in yet another register: the wallpaper, one gradually realizes, is a pattern of women’s faces, while the lighting is such that a blurred image of a woman is projected onto it. All of this uses the Ashby stage to great effect and manages a satisfying contemporary correlative to Ibsen’s psychological character development (which, to my mind, is weakened by Bergman’s cuts).

Finally, I would be remiss not to praise the acting of the other characters: Michael J. Asberry’s Dr. Rank walks the tightrope between superficially genial family friend and menacing embodiment of another potential moral “illness.” Adam Elder plays Krogstad likewise, neither an inept buffoon nor a devious malefactor, but somewhere in between and uncertain of which he is forced by his situation to be. But most of all, Erin Mei-Ling Stuart shines—to my mind the most interesting performance of the production. She plays Kristine Linde with a subtle mystery, as if the character is using all the resources at her disposal to flatten her affect. This is incredibly effective, and lends the scene of reconciliation with Krogstad an understated tragic grace, making it less a foil for the Helmers’ unraveling relationship, and more of an interesting “problem” in its own right. (At moments I almost felt that the real resolution to the question of how to stage this play today might be right here.)

All in all, this production gives—alongside the sheer enjoyment of the performance—much food for thought and manages, sometimes despite and sometimes because of the limitations of its chosen text, to present this famous problem play in a way that sheds an unexpected sort of light onto a set of problems haunting our present.