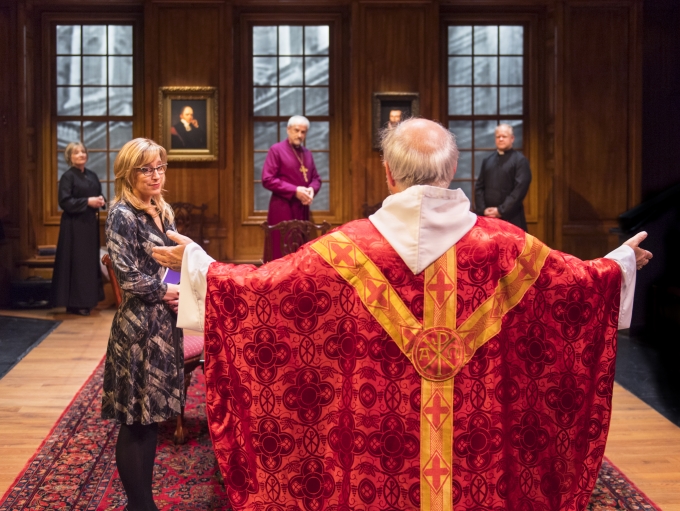 We enter a room in disarray. Old coffee cups litter a massive oak table, chairs askew around it. At the center of the room, at the center of the table, lies a map. Morning light spills in the window banks. We hear the sounds of a crowd outside; the ornate building facade outside seems to tremble. Steve Waters’s Temple, in a compelling production currently running at the Aurora Theater, opens when a crowd and a building—both outside the room, both in turmoil—begin to move.

In 2011, Occupy London protesters collided with St. Paul’s and its history. Unable to set up camp outside the London Stock Exchange, encampments wound up nearby, just outside the cathedral. St. Paul’s, the play reminds us, is the heart of the City of London. While the Christopher Wren design dates from the seventeenth century, St. Paul’s has existed in some form since the ninth century, the heart of public gatherings. It is beloved in part for its longevity: St. Paul’s survived fierce bombing onslaughts in 1940 and 1941. Occupy swirled the cathedral into international news when the cathedral—which had not been shut since the Blitz—closed for a full week. Once closed, the cathedral’s governing body, known as “chapter,” confronted media outrage, as well as significant financial losses and a pressing question: when and how should the cathedral be reopened?

Temple recounts the painful struggle within the cathedral’s office on the morning of the cathedral’s re-opening. We quickly learn that a contentious meeting of chapter has voted to re-open St. Paul’s and to seek that the protests be disbanded. In a stand-out performance by Paul Whitworth, the Dean Chancellor of St. Paul’s struggles to meet the day, at once sympathetic and disdainful toward the protestors outside. Technically the leader of chapter, he has shown the group little guidance—or so, at least, the explosive Cannon Chancellor claims before resigning via Twitter. Poised on the brink of re-opening the cathedral, celebrating the liturgy, and working with the City of London to disperse the protestors, the Dean pauses to consider what lies ahead. We spend the morning with him. He rereads his sermon, reflects on the noises outside, confers with his new assistant Lizzie, strategizes with the Bishop of London, and parries with the legal counsel of the City of London.

Formally inventive, Temple experiments with the gap between what is seen and unseen. The play is built on oppositions—tent versus temple, tweet versus sermon, chapter versus general assembly. These guiding shapes for shelter and consensus are underscored by the map that lies at the center of the stage. The spaces we inhabit underlie all that we do, the play tells us a bit heavy-handedly, as character after character waves the map. The play’s formalist concerns afford us the unanticipated delight of watching the clergy’s most powerful and erudite derailed by cell phones buzzing, media storms, cupcake deliveries, and workplace jargon. These trivial shapes move the morning along. The play’s most dominant forms, by contrast, are only spoken. Which is to say: Temple is a one act play, and it takes place in a room that is not part of the Cathedral proper. Crowd, tent, temple, and tweet are only described, never visible. The forms that the play teaches us to regard as central are always spatially absent and thus always perhaps imaginary, rather than wholly determining. This is the genius of the play.

Nowhere, for example, are forms more powerful than inside the cathedral, a space the audience never occupies. Lizzie recalls her father, a vicar, transcending his deep mediocrity in the pulpit. “Magic,” she calls it. Temple writes the cathedral as a magic space, just as capable of embracing the Occupy movement as of dispelling it. We know from the get-go that the cathedral’s Dean, like his Cannon Chancellor, will soon resign, and the play hints that this “voluntary” decision will soon be handed to him from on high. In other words, he’s free to do as he thinks best, and he knows it. His alternatives include the plan with which he begins the morning, or alternatively a somewhat self-interested public relations campaign to engage the protestors and resist eviction. The morning’s reflections on these choices suggest that re-opening need not imply eviction, and that neither choice is structurally determined. The Dean’s sympathetic bumbling renders his decision to acquiesce to the City’s eviction requests more mystifying than villainous, a miscalculation that the play does not finally explain.

Temple will resonate here in Berkeley. Our own engagement with the Occupy movement—and the woefully unnecessary police interventions that punctuated the fall semester of 2011—remain fresh memories. The play will bring up newer, perhaps more painful resonances, too. It reminds us that we’re still living with the forces that galvanize and contain grassroots movements like Occupy, underscores the simultaneous triviality and irrevocability of Twitter, and prophesies how the lost chances of the recent Democratic primaries may feel to us a few years from now. Temple represents a mystifying and unnecessary failure of engagement. It recalls us to old hopes and forms which may never again obtain, but out of whose futility we can perhaps build new meaning. Go and see Temple.

Margaret Kolb, a Berkeley Connect Fellow in English, is currently completing The Romance of the Probable, a book manuscript chronicling the relationship between narrative fiction and the mathematics of probability in the eighteenth and nineteenth centuries.

Aurora Theater’s production of Steve Water’s Temple is directed by Tom Ross; it is playing until May 14th, 2017.

This review is part of the“On the Scene,” which asks current graduate students to review select local plays. For those of you in the Bay, this will be an excellent way to keep track of nearby theatrical offerings. For those of you elsewhere, perhaps these reviews can re-create a little slice of Berkeley theater for you.