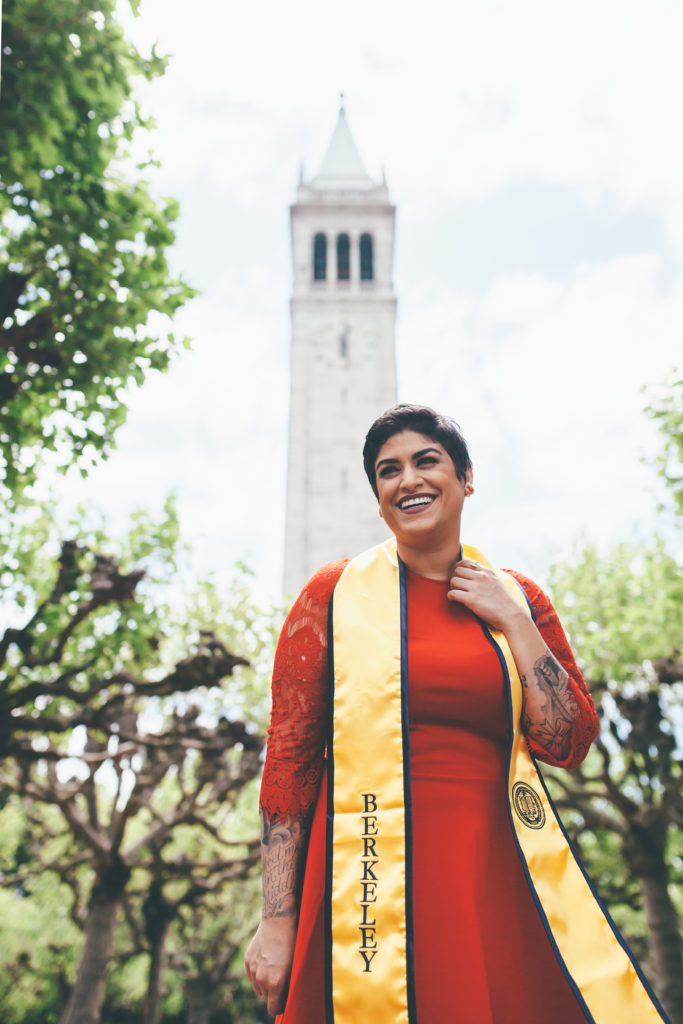 Auzeen Abdi (’17) was chosen to speak at the English Department’s 2017 Commencement Ceremony on May 20th, 2017.  What follows is the text of her address.

Good afternoon fellow English students! Can you believe it? We finally did it! Whether you’ve been here four years, two years, longer or less, we’ve been dreaming of this day where there are no texts to analyze, no late-night deadlines, no pressure to prove your point. This, the commencement, is our proof! We get to walk across this beautiful stage to show our loved ones, our peers, our faculty members, that we graduated from one of the best schools in the freakin’ world!

My name is Auzeen and some of you may know me as Auzi. I am a bay area native, and transfer student from Las Positas College. To be frank, I have never written a speech like this before. When coming up with a theme for this speech, I asked myself, do I write a farewell address, or do I say hello to success? Is that what this is? Is today about success? Yes, of course! – Now I wanted you to ask yourself some questions. Is success what brought you here today? If so, where did that success come from? Do we ever think about the opposite of success? As English majors, we are critical thinkers and we have the ability to peel the many layers of language and read in between the lines. So what are the layers of success?

Being a student was one of the hardest things I’ve ever had to go through, from the moment I stood in front of my kindergarten class to count to 100 (and only got to 19), to my undergrad thesis where I wrote about femininity out of a San Francisco tourist guide, and I still don’t know how I managed to do that. Unfortunately, I have a disadvantage that placed me at the very bottom of my classes in grade school, and that also reflected during my years here at Cal. For the most part, I considered myself a failure.

When I got my first car at the age of eighteen, I would drive around Berkeley for its quaint features and local personality. However, I hated driving up College Ave. because I knew what was at the end – a college. Making that left-turn-only onto Bancroft was a reminder of my unavoidable failures in education and forced me to create fantasies in my head: What would have happened if I was smart enough? –if I was like other kids? Why was I born this way? Why don’t I deserve to go to college? I never thought 10 years later I’d be here.

Some five years ago, I had an epiphany. But not a bad epiphany like one James Joyce would present to us in Dubliners, or an open-ended epiphany like Mrs. Dalloway couldn’t help but go through. It was just a simple moment, where I decided I wanted to go back to school. It would mean devoting 100% of my time in learning centers, office hours, study groups, and any other way I could get help. I went into community college thinking I would be an average student, with a high chance of failing, but knowing I tried my best. Surprisingly I ended up with an acceptance letter into the College of Letters and Science of UC Berkeley.

I thought the tools I used in community college were all I needed coming to Cal. Unfortunately, I very wrong. As transfer students, we are not well prepared as students coming in as freshmen. The expectations at Cal are much different than those at community college. So, after spending 2 and half years of dedication and hard work, I came here only to be told by a professor that I shouldn’t be an English major. Once again, I failed. I went home and ate two whole pizzas by myself. That kind of things happen to us here at Cal.

So what do I take from that upsetting engagement? Do I listen to that professor and pick another major? Do I drop out and give up completely? I’m a failure right? All those questions boiled in my mind until about a week later, I met with another professor to go over my midterm. This professor told me that I made an observation in The Canterbury Tales that no other scholar has ever found before, and that’s the reason why I am an English major.

I bring up my past because I want to share with you that in order to be successful we must fail. On the last day of instruction, my last class, Professor Eric Falci closed his lecture with a piece on Samuel Beckett:

What does it mean to fail better? Does it mean to fail worse than your last failure? Or does it mean to fail less as you go along? Look at me, I don’t have to write any more papers, yet I’m analyzing a text in front of my colleagues and the entire English department. My argument? I think we must to fail in order to learn. Failure is the root and soil of success and sometimes you’re going to forget to water that soil, but that’s also another road to your success. We must crash or fall or eat two whole pizzas before we take the next onward step. So next time you’re in deep shit, think about the situation you’re in. What are you learning from it? Then take that failure by the balls and run wild.

I want to conclude my speech with a big thank you. We greatly appreciate those who helped us pave a road to get here today: our parents, grandparents, family members, guardians, role models, our friends, and even UC Berkeley with their resources and faculty members, GSI’s and so on. Thank you for giving us a chance to grow, to see our true potential and to be what we want to be.

I think we often forget to thank the most important person of all. Look around you? Who is that person? That person is you. We deserve to appreciate ourselves for making choices, whether right or wrong, that get us to this point today. And we should continue to thank ourselves as we move along. Because we matter. We are important. No one is going to hold our hand and guide us through this labyrinth called life. Only we can fail again and again, and we can fail better.